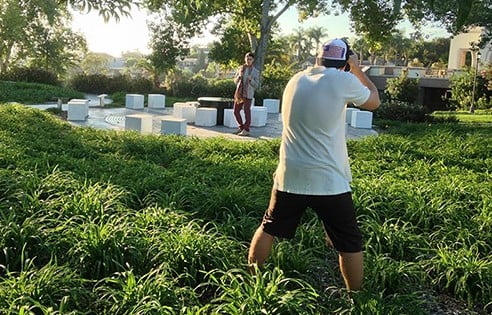 A summer of international styles, photo shoots and creative collaboration for a team behind a fashion magazine on campus

Every quarter, the staff members of Trend Magazine — a student-run publication founded in 2010 at UCSD — pool their fashion-inspired minds to design an issue flaunting the latest upscale trends of the season. They’re at it once again in light of their 2013 fall issue — only this time, their brainstorming began overseas. As a result, readers can expect to see plenty of international influences prevalent in the featured looks throughout the pages of their upcoming issue.

Four of their staff members studied abroad this summer, allowing them glimpses into the fashion scenes of Spain, London, Italy and, more thoroughly, Paris. Their collective exposure to varied European apparel now serves as a source of inspiration in their creative process of putting together the magazine.

Trend’s editor-in-chief, Sixth College junior Tanya Zhang, spent five weeks studying jazz in Paris through the UCSD Global Seminars program before making a trip to Italy — but not without first getting a taste of some high-end fashion.

“I went to multiple fashion exhibits that were [in Paris] while I was there [in July],” Zhang said. “[The ‘Little Black Dress’ exhibition at the Mona Bismarck American Center for Art  and Culture] showcased the simple black dress [from] different eras and different designers,  like Dior and Chanel. It was a smaller gallery, but it was cool to be in Paris at the same time that they had that exhibit.”

Zhang also attended the “Paris Haute Couture” exhibition at the Hotel de Ville, where she was dazzled, as she described, by the sight of the grand showcase of extravagant gowns.

“Being in Paris definitely expanded my knowledge of fashion,” Zhang said. “The whole atmosphere influenced me a lot, and I’m definitely bringing a lot of what I learned into our issues by having pages based off of the exhibitions and the information I got from Paris.”

Zhang revealed that her observation of Parisians’ penchant for all things black will resonate strongly throughout their upcoming issue.

Upon returning from their travels in August — with notes on the fashion trending abroad — Zhang and her leadership team regrouped in San Diego to exchange ideas and develop a concept for their fall spread.

Earlier this month, they had their first photo shoot for their fall cover, which revolved around the aesthetic of dark layers accented with pops of color. Once released, students may notice a familiar face or two.

“Recently, we started using UC San Diego students [as models], because it widens our readership,” Zhang said. “We find students that are actually trying to pave their career towards modeling, not just random, really pretty students on campus.”

While reaching out to students on campus, Trend tries to stay well-connected with the surrounding community in San Diego. They’ve established local networks that allow them to borrow clothing from boutiques and recruit the help of professional makeup artists and hairstylists on set.

“We actually reach out to the community a lot,” Zhang said. “We have a lot of networks based off of the city in San Diego, so we’re trying to reach out and interview designers and bloggers in San Diego.”

Trend’s previous issues have featured exclusive interviews with fashion designers and bloggers, such as La Jolla-based designer Anh Volcek and Jenny Ong, the creator of the style blog Neon Blush.

Though Zhang admitted that appealing to the different crowds — both on and off campus — is a tough feat, bridging the two worlds has been a valuable experience for her.

“I like seeing how other people network,” Zhang said. “I think giving [myself and the students involved with Trend] the opportunity [to work with professionals] and setting up photo shoots where professionals can mingle with the students is such a great thing.”

Zhang believes that her experience with Trend could potentially benefit her with her aspiration to work as a graphic designer for a magazine one day.

But for now, as the head of Trend, she has other things to tend to in her nearer future (more specifically, next week): Fashion Week San Diego and another photo shoot.

“The pages right now are all planned out,” Zhang said. “We know who we’re going to contact [and] what we’re going to do. The ideas are there; we just need to do it.”

Trend’s fall issue is tentatively set to come out toward the end of November.