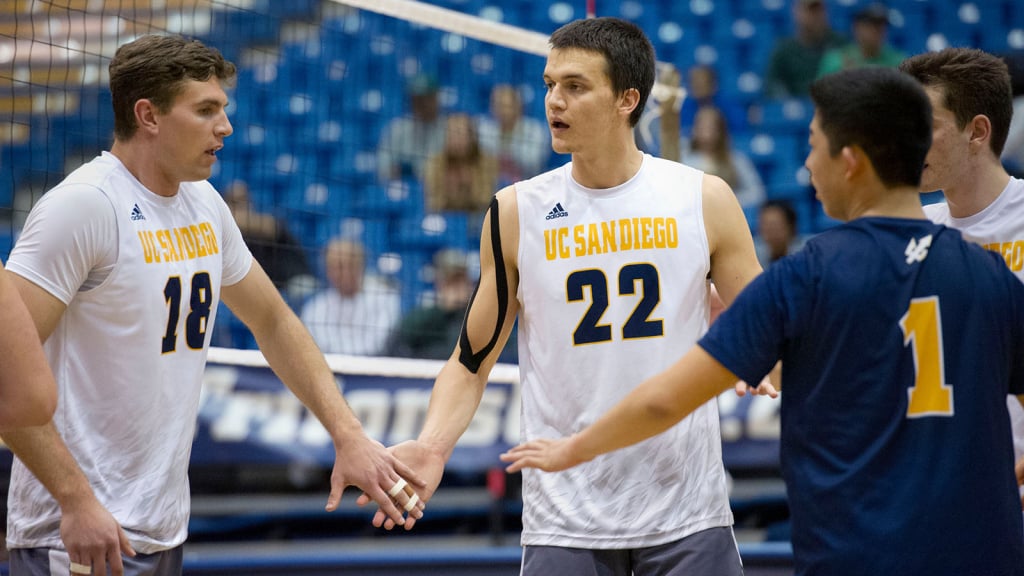 The UC San Diego men’s volleyball teams traveled to Provo, Utah this past weekend to play against No. 3 Brigham Young University. The Tritons lost two close games in three sets, bringing their record to 2–7 in the Mountain Pacific Sports Federation and 5–9 overall. BYU improved its record to 6–1 in the MPSF and 12–2 overall.

UCSD started off with a 3–0 run, but BYU later responded with three kills in a row to tie the set 12–12. The match remained close for the rest of the set, but UCSD was unable to edge ahead of BYU, despite strong offensive efforts. The final score was 25–21. A nail-biting second set made it seem like the Tritons could pull for the win, but two kills in a row by BYU’s senior outside hitter Jake Langlois sealed BYU’s win, 26–24.

Again, the third set was a close one. Even though the Tritons never took the lead, they came within one point a few times. Alas, a Jake Langlois kill sealed the deal for the Cougars, as they won 25–23. Langlois had the most kills of the night, with 17. Junior opposite and setter Tanner Syftestad had the most for the Tritons, with 13.

“If you look at the statistics from the match tonight, we did a lot of good things,” UCSD head coach Kevin Ring told the UCSD Athletics Department. “We hit .324 to .348 by BYU, had 7.5 stuff blocks to 6.0 and 24 digs to their 20. In the end, the big difference was they had 10 more kills than us and eight more points on the night. We did a lot of good things, but for us to win a set, get a second and try to win the match, we have to play some of the key points a little bit stronger.”

The first match saw 12 tied scores and three lead changes, the last lead change coming at the end of the match: The Tritons were up 25–24 and needed one more point for the win. However, sloppy Triton defense allowed the Cougars to take the win, 27–25.

The second match was not as competitive as the first, but the Tritons did have two more kills in this set than the previous one. Unfortunately, though, a kill by — you guessed it — BYU’s Langlois gave the Cougars their winning point to put the final score at 25–21.

In the third set, the Tritons were off to a solid start, but a kill from the Cougars put them up 7–6, and they never looked back. BYU won 25–22.

“When you’re playing a team like BYU, at home and as good as they are, you have to find what you are going to do that’s better than them,” Ring said. “From the service line tonight, we missed 18 serves, so we definitely needed to cut down on some errors. I felt like on the night, we competed really hard and never quit, so I definitely appreciate the battle in the guys. But we still have some work to do to try and find a level of play that we can stay consistent at and can push us across the finish line late in these sets to turn the tide in our favor.”

Next up, the Tritons will host UC Santa Barbara and UCLA on Feb. 24 and Feb. 25, respectively. Both games will start at 7 p.m.