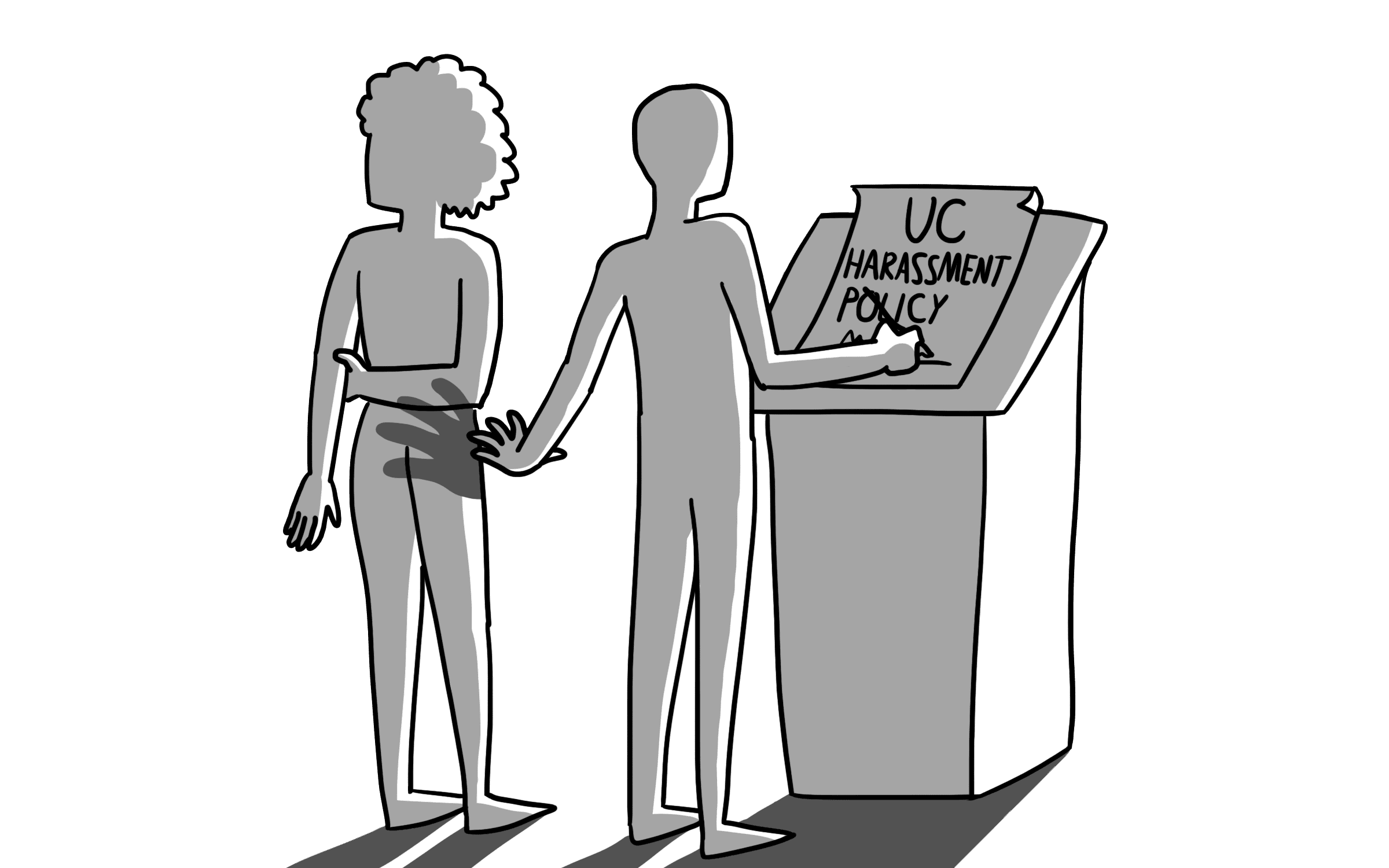 Following the alarm raised by last year’s sexual harassment cases within UC Berkeley’s administration, the University of California system showed an understanding of the need for better policies addressing sexual harassment and assault on UC campuses. In the last two years, UC President Janet Napolitano and the UC Board of Regents have worked to make the ten-campus system implement these new policies. They have increased reporting requirements, expanded education and training, and broadened support services for victims. Though these policies were implemented statewide, it seems as though the regents themselves are not being held to the standards instituted at the very campuses they oversee.

Recently, Regents Board member Norman J. Pattiz was accused by podcaster Heather McDonald of sexual harassment. According to McDonald, who worked at a podcast network started by Pattiz, he regularly made her feel uncomfortable in the workplace. In the instance captured on the audio recording that Pattiz aired on her show, Pattiz asked if he could hold McDonald’s breasts, stating that his hands were made of memory foam in reference to the memory-foam bra advertisement McDonald was reading at the time of the comments. Since McDonald has come forward, former employees have noted that Pattiz would routinely comment on female employees’ breasts and other body parts.

In the days since McDonald’s public revelation, Pattiz has released an apology stating, “There is no excuse for any such comments or making anyone feel uncomfortable. If I did that, I sincerely apologize, and it will be a valuable learning experience.” Pattiz’s apology does not seem sincere, and his lack of public admittance to his actions is disgraceful and disgusting. His comment, “If I did that,” seems to imply that he doesn’t actually believe he made McDonald and other women uncomfortable, despite the fact that all of his comments were audio recorded. Further into his apology, Pattiz remarks, “You can teach an old dog new tricks,” and vows to bridge any generation gap between himself and other employees. Pattiz is 73 years old. That Pattiz believes a generation gap is at the root of the issue is disheartening and, frankly, terrifying. A generation gap is not at play here — a gap between Pattiz’ brain and his penis is. Women should not have to teach men not to make lewd comments and gestures about their bodies. Female employees should not be afraid of their male bosses. The comments made by Pattiz are not acceptable, will never be permissible, and will never be forgiven or forgotten due to an insincere apology.

Despite this public revelation, the UC system and Napolitano have declined to comment on Pattiz’s behavior or his position as a regent. Although the University of California defines sexual harassment as entailing “unwelcome sexual advances, unwelcome requests for sexual favors, and other unwelcome verbal, nonverbal or physical conduct of a sexual nature,” it looks as if Pattiz will continue to keep his job with the UC Regents. Once a regent is appointed for a term of 12 years, they are likely to be reappointed by a new governor when their term is up. Pattiz has been a member of the regents since his appointment in 2001 by former governor Gray Davis.  Because he was reappointed by Gov. Jerry Brown in 2014, Pattiz’s term won’t end until 2026. This means that we, as UC students, will have a man who has been caught sexually harassing women in a number of instances as a figurehead of our school system for the next 10 years. The UC Regents website does not give any insight into how a member can be terminated from their position, nor does any source of information about previous members’ resignations exist on the internet. It is concerning, further, that those representing our university as UC Regents have no particularly innovative experience in in higher education policy; many are wealthy business owners appointed by a bureaucratic government. A lack of insight by our leaders into the policies needed to regulate a system like the University of California has proven to be detrimental to the safety and security of students.

These unspoken policies and mishandlings created by UC officials are unacceptable. UC officials are allowing a man who has a proven track record of harassing women to make vital and important decisions regarding our education. The UC system cannot continue to allow its affiliates to act in this manner. If the UC Office of the President looks to take a firm stance against sexual harassment and assault, then it must be tough on those exploiting their positions of power in their own office. By staying silent, UC officials are encouraging victims of sexual harassment and assault to stay silent as well. The UC system needs to be a voice for what is right for the sake of its students, faculty and staff.