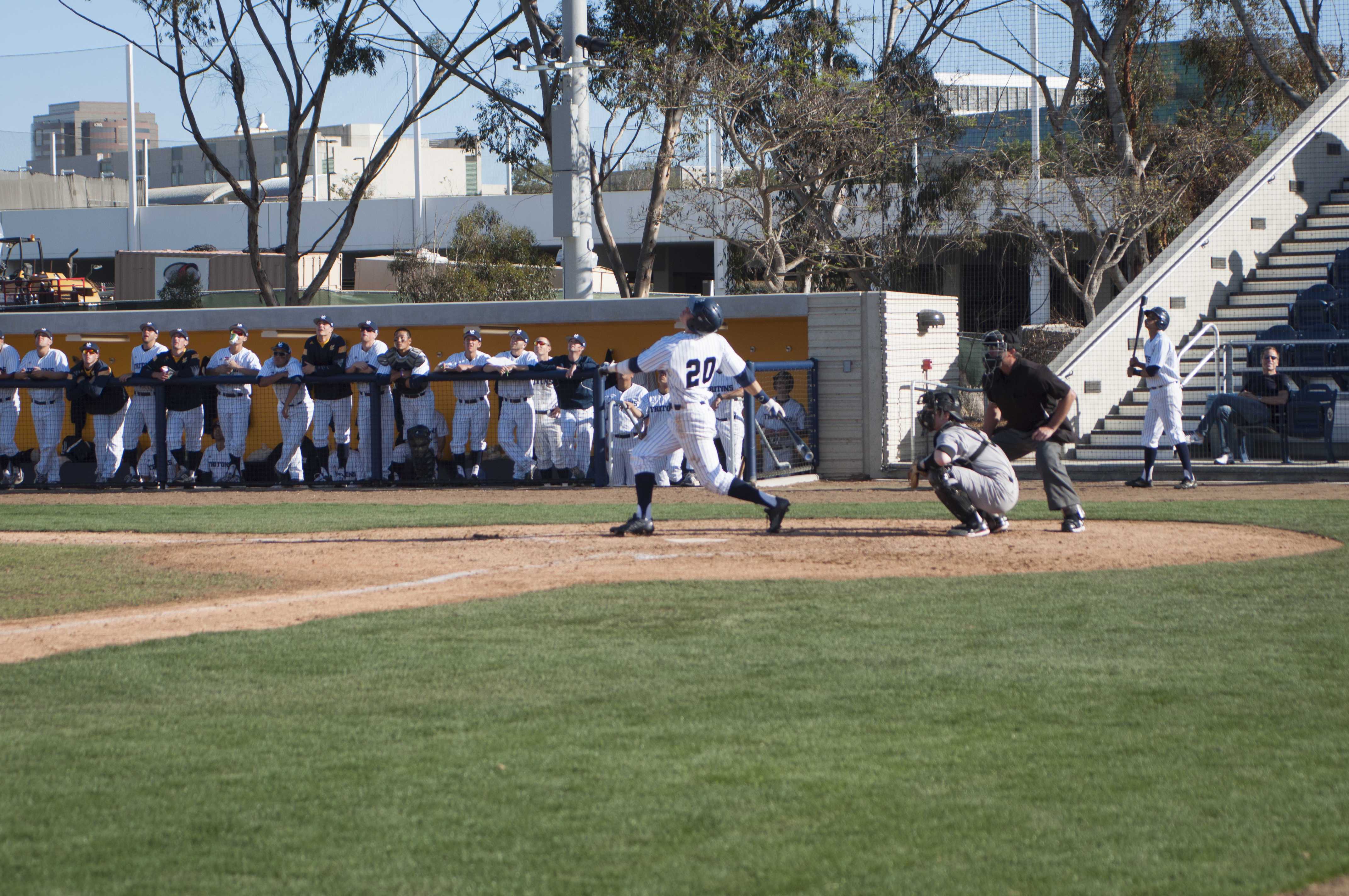 No. 26 UCSD baseball defeated The Master’s College during a non-conference doubleheader matchup held on Saturday, Feb. 6 at the Triton Ballpark.

During game one, the Tritons earned their first win of the season with a final score of 3–2, as they held onto a one-run lead after the fifth inning, shutting out TMC in the last four innings of the game.

In the second game, UCSD defeated TMC in the bottom of the tenth at 4–3 after a tie in the top of the ninth frame and earned its first walk-off victory of the season. The Tritons begin their season with a record of 2–0 and will continue their busy 13-game home-stand this week, facing off with Texas-Permian Basin at 6 p.m. this Thursday night at the Triton Ballpark.

Redshirt sophomore starting pitcher John Erhardt picked up his first career win for the Tritons, allowing only four hits to slip by and two runs scored in a total of five innings pitched. The Master’s College Mustangs came out aggressive at the plate in the top of the first inning, hitting back-to-back singles and putting runners on first and second with two outs. Erhardt got out of the jam by getting the Mustangs’ clean-up hitter to pop-up for the final out of the inning. Redshirt junior outfielder Brandon Shirley and junior outfielder Jack Larsen both singled during the bottom of the first, but it wasn’t enough to put a run on the board for the Tritons.

The ballgame was tied up at 0–0 until Triton junior second baseman Vince Mori was hit by a pitch with the bases loaded, scoring the first run of the game. Redshirt sophomore designated hitter Justin Flatt followed Mori with a base hit up in the middle to score another run for UCSD, leading into the fourth inning with a score of 2–0.

The Tritons then picked up right where they left off with a leadoff double by Hearn in the fourth inning. Hearn followed redshirt sophomore catcher Steven Coe with a single to right field, putting runners on first and third with nobody out for Shirley; Shirley knocked in the run with a base hit to the right side, before the side was retired. After a two-out walk issued by Erhardt at the top of the fifth inning, the Mustangs’ senior infielder and outfielder Collin Nyenhuis blasted a two-run home run, the Mustangs’ only two runs of the game.

Freshman right-handed pitcher Kyle Mora made his collegiate debut early on in the sixth inning; he threw three scoreless innings, giving up no hits and striking out two opposing batters before redshirt freshman right-handed pitcher Cameron Kurz came rescuing the Tritons with a save during the ninth inning. Mora and Kurz held on to the 3–2 lead for UCSD as they shut down the Mustangs’ offense, giving the team its first win of the season.

The Master’s College came out hungry for a win in the night-cap of the double-header on this past Saturday.

Nyenhuis hit a two-out solo home run to left field off of Triton redshirt senior right-handed pitcher Alon Leichman at the top of the first inning, giving TMC an early lead. While UCSD’s leadoff Shirley doubled down the left field line to get things started for the Tritons, he was unable to make it home and was out within minutes.

Sophomore designated hitter Tyler Plantier singled, allowing Sanchez to score from third for the Tritons’ first run of the game. However, the pitcher quickly picked Plantier off of first base, getting the first out of the inning.

Larsen subsequently took advantage of two back-to-back wild pitches to score on the Tritons during second run of the game, resulting in a score of 2–1 in favor of the Tritons heading into the fifth inning.

Leichman retired the side in order, allowing only two hits and one run to slip by through the five innings pitched, while striking out a total of four times.

Sophomore right-handed pitcher Jack Rupe relieved Leichman early on during the sixth and managed to retire all of the Mustangs’ batters.

Toward the end of the seventh frame Mori hit his first home run in a UCSD uniform, adding an insurance run for the Tritons which helped them secure the win during the last leg of the game. The Mustangs looked to rally back in the top of the ninth with TMC hitting back-to-back singles off Rupe, putting runners on first and second with one out.

Redshirt freshman right-handed pitcher Erik Amundson made his collegiate debut as he came into relieve Rupe and face the middle of TMC’s line-up, giving up a base hit to right field, allowing a one-run score for the Mustangs.

Then, a sac-fly to deep center field tied the game up at 3–3 before freshman left-handed pitcher Brent Bell came in to relieve Amundson and get the Tritons out of their jam without any damage.

Although the Tritons failed to score in the bottom of the ninth, taking the game into extra innings,

Bell retired the Mustangs in order at the top of the tenth, putting UCSD in the optimal position to win the game.

Coe led off the inning being hit by a pitch, moving over to second base after a perfectly executed sacrifice bunt by junior shortstop Tyler Howsley.

Shirley then fouled out, resulting in the second out of the inning which let Sanchez work the pitcher and ultimately be rewarded with a walk, putting runners on first and second. Larsen then stepped into the box and smoked a basehit to right field, scoring Coe off of second in casual walk-off fashion.

“Toward the end [of the game], we lost our momentum in the ninth, but our guys grinded it out and worked their way back in it and that was good to see,” Head Coach Eric Newman told the UCSD athletics department after the game. “I just want us to continue to find out who we are, find our identity, play the game together as a team … I look forward to us continuing to find that good baseball that we known we have in us.”

The Tritons look to continue their hot streak on Thursday, Feb. 11 at Triton Ballpark as they face the University of Texas of the Permian Basin. First pitch is set for 6 p.m.