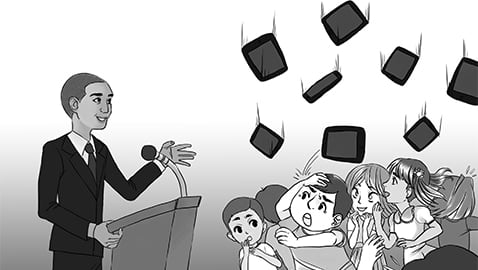 From hammers to knives, tools helped early humans evolve from Neanderthals to Homo erectus. In the modern day, digital technology is the tool that will help students turn into contributing adults and be competitive in today’s economy. President Obama has called for more technology in the classroom to enrich student’s education and allow them a personal stake in their learning. By modernizing the toolbox that students can use in their day-to-day learning, Obama will create an environment more conducive to learning.

The ConnectED initiative will carry out the goal of bringing information and learning through the use of technology. More than just a government venture, the program seeks out the assistance of the private sector, finding discounts on the technological tools classrooms will benefit from. And the tech titans have responded well: Companies like Apple and Microsoft have pledged to donate hundreds of millions of products or discounts on devices for public K–12 education. Of course, Obama has also looked to the Federal Communications Commission for help. The FCC’s E-Rate program aims to connect 20 million students to broadband and wireless connection through a $2 billion dollar down-payment. By using executive action, Obama can reform education without requiring congressional approval or being bogged down by the time it takes to even get it.

The obsession with redefining standards and attempting to find what’s wrong with education has turned into a hindrance at this point. The Common Core State Standards are representative of this constant worry over what students are learning. Yes, guidelines and standards are important, but it’s time to step back from making sure our elementary school kids are as good as everyone else in the world. It’s time to focus on true enrichment; this means giving them resources and not looking at test scores at every chance.

Implementing technology into the classroom allows application of knowledge with a personal investment, ensuring the next generation of engineers will always be motivated. Apple’s pledge of MacBooks and iPads means much more than giving students access to a typing and note-taking tool. Those devices represent a development team duo from which apps can be coded and tested. Instead of playing game apps, students can start making them. Not to be outdone, Microsoft offered to reduce the cost of its Windows operating system, allowing schools to determine their own price point for each computer. While students will inevitably use the PC for the usual Word processing and Internet research, design software firms like Autodesk are hoping to expand the use of the computer to facilitate creativity. They currently offer free computer-aided design software, a tool that can be used to design literally anything in 3D. Obama’s plan hasn’t just placed the metaphorical ball in their court; it has given it to students and asked them what game they want to play.

But it isn’t enough just to give tools — it’s necessary to make sure they can access a database that will help them learn how to use them. The classroom does a pretty good job, but a supplement is necessary sometimes. Informal sources of knowledge, such as educational videos on math and science provided by Khan Academy, or Codecademy, a coding website, are provided for free on the Internet. A broadband Internet connection at school means that the computer lab can be an after-school enrichment facility rather than being relegated to being “that place that has word processing”.

Educators have focused heavily on how they can spark interest in the STEM field, but they typically lack the foresight to consider what happens after ignition. Teachers have given the students insight into how the world works, but they have nothing to channel their knowledge into, no resource for creativity. According to a Pew Research study, the lack of resources among low-income students prevents 56 percent of teachers from incorporating more digital tools into the teaching. The ConnectED initiative aims to rectify this issue. Having more tech in the classrooms means students will be able to take their knowledge and work it until they reach a tangible fruition.

Obama has been hard at work to fulfill his vision of 2014 as the “year of action.” The ConnectED initiative may not be looking to specifically attack educational standards or directly improve student performance, but that’s not his main intention. Instead, he’s making it more obvious to this generation that rather than looking for a solution, they’re better off creating one. The world doesn’t run on test scores and rankings — it progresses through innovation. And students are just now realizing how much they can contribute towards this advancement.