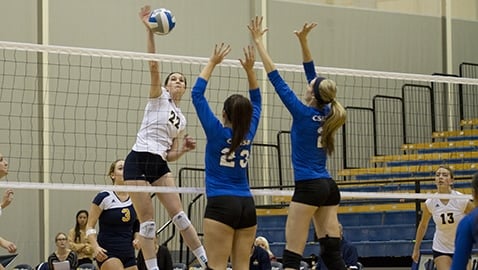 Sara McCutchan becomes the seventh player in Division II history to have a perfect hitting game, going 11 for 11 with no errors.

UCSD middle blocker Sara McCutchan put herself on a very short list on Friday, Nov. 8, when she became just the seventh woman in NCAA Division II play to hit 1.000 in a game with a minimum of 10 attempts. It was the first time the feat had been reached since October 2011.

“I didn’t really realize how big of a deal it was,” McCutchan said. “That particular game I wasn’t sure until the last game when my coach was like, ‘Set Sara, she hasn’t missed one yet.’ I really wasn’t sure until the end. Once we got to the very end, he was careful not to have me go in at a weird time to disrupt it.”

As a point of reference, on the season the UCSD Women’s Volleyball team hit .234. The next night, McCutchan set a season-high mark for kills with 17 and hit .361.

“Perfection is just reflective of the number,” McCutchan said. “It wasn’t a ‘perfect’ game. I never know exactly what I’m hitting, but you kind of have an idea, you know, whether I’m hot or not. I was just trying to help the team by playing well.”

The Tritons have had a very successful regular season, amassing a 25–5 record that includes a 17–5 conference record. At one point during the year, the UCSD women’s volleyball team went on a nine-game winning streak.

“I feel so proud of what we’ve accomplished this season,” McCutchan said. “We’ve just stepped up our game and everyone had to take more responsibility and be more accountable because we’ve had less people, fewer starters.”
“Fewer starters” is a reference to the roster shake-up that took place just as the season began, when sophomore starter Amber Hawthorne left the squad. Sophomore Heidi Sierks was forced to step into the role, and the team grew closer as a whole in the wake of it all.

McCutchan is a senior from Eleanor Roosevelt College pursuing a degree in cognitive science, though the middle blocker has junior standing after redshirting her first year on the team. She has a background in both volleyball and basketball, though she pursued basketball before trying volleyball.

McCutchan’s decision to play volleyball was quite the good fortune for Head Coach Ricci Luyties, who took over the program after her first year at UCSD.

“Ricci didn’t recruit me, it was the coach before him that left and went to [Loyola Marymount] after that season,” McCutchan said. “It was just a happy chance that I get along with my coach so much and he’s such an awesome guy, because it wasn’t my plan.”

On Wednesday, Nov. 27, McCutchan was named to the All-CCAA second team. This season, she leads the Tritons in hitting percentage, while ranked fourth in the conference and 19th in the nation. McCutchan is second on the team in points, and she ranks third in both kills and blocks.

McCutchan hopes that the journey for UCSD doesn’t end too soon, with playoffs set to begin.

“As the season has gone on, my goals have molded to where we are,” McCutchan said. “I really think we can win the regional tournament. It would be unbelievable to go to Nationals. From there, I’d make new goals, but we have to get there first.”

The Tritons begin their quest for an NCAA Division II title Thursday, Dec. 5, against Dixie State at Cal State San Bernardino when the NCAA West Regional gets underway.