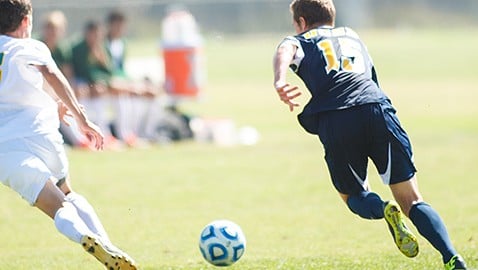 It was announced last Monday, Nov. 11, that the UCSD men’s soccer team would live to play another game.

After falling to Cal State Los Angeles in the California Collegiate Athletic Association championships last week, the Tritons earned their first bid to the NCAA Division II national tournament since 2003. UCSD will go into the regional with the No. 2 seed, behind No. 1 seed Cal State Los Angeles and in front of No. 3 Chico State.

Beginning this Thursday, the Tritons will host the NCAA playoffs for the first time in program history, when No. 3 Chico State will face No. 6 Seattle Pacific.

UCSD will play the winner between Chico State and Seattle Pacific this Saturday at 7 p.m. at RIMAC field.

“We’re definitely excited to be going to the tournament and even more excited that we’re hosting,” senior defender Alec Arsht said. “I think there’s definitely a bit of a bitter taste in our mouths after losing to Cal State Los Angeles — we thought we definitely dominated the game, but hopefully, that’ll just motivate us more this weekend.”

UCSD took on Chico State in the semifinal, beating the Wildcats 2–1 on an overtime golden goal by freshman Malek Bashti. The goal was Bashti’s first of the season and came just one week after he was sent to the hospital for a cardiac arrhythmia.

“What a moment for Malek, to score his first goal on a game-winner in overtime,” head coach Jon Pascale said. “It was great to see that kind of swing for Malek; I couldn’t be prouder.”

On Sunday, UCSD fell to No. 1 seed Cal State Los Angeles 1–0, in a game where Pascale said the Tritons dominated the opening half and Arsht said UCSD was the better team.

“The first half of the final was probably the best we played all year. Unfortunately, we put one just wide,” Pascale said. “In the second half, the game was a bit more even, and they capitalized on an opportunity to late, but I still thought it was some of the best soccer I’ve seen all season.” 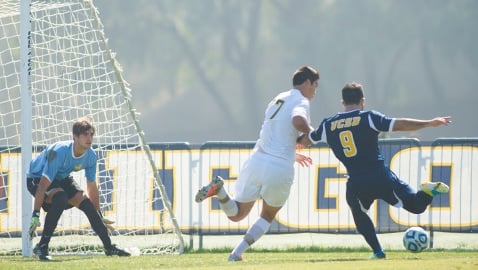 Five Tritons earned All-CCAA honors this season. Seniors Andisheh Bagheri, Josh Cohen and Arsht earned the All-CCAA first team honors, and Cohen also won the CCAA Best Defensive Player of the Year award. Senior Taylor Wirth, who sustained an ankle injury that may see him sidelined for the remainder of the postseason, was named to the All-CCAA second team. Pascale was awarded the CCAA Coach of the Year for the second consecutive season.

“It felt pretty special to win it,” Pascale said. “There are a lot of great coaches in the league, and being recognized by them felt great.”

This Thursday, if No. 3 Chico State wins, UCSD will face the Wildcats for the fourth time this season. The Tritons are 2–1 with Chico State, and Pascale said that the two teams match up against one another well.

“We like that matchup,” Arsht said of a potential bout between the two CCAA powerhouses. “They definitely like to bang around the field a lot and have a lot of heavy hitters, but I think we can definitely hang with them.”

Of course, if Seattle Pacific bests Chico State Thursday, the Tritons will go up against a school they haven’t faced since their 2007 season. Given either scenario, Pascale is confident that the Tritons will perform.

“I told all my guys to make sure they leave their mark on the program,” Pascale said. “I think they’ve done that, but I don’t think this team is done yet.”