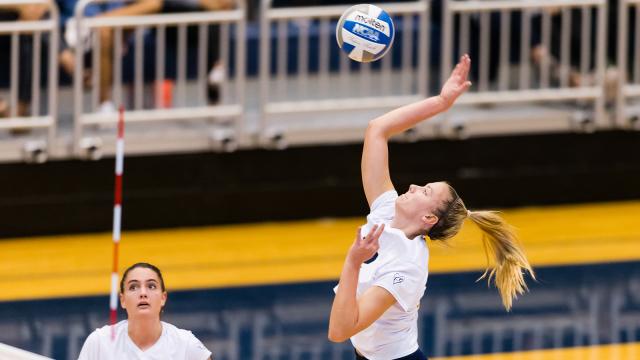 After an inconsistent first two weeks of the season, the UC San Diego women’s volleyball team seems to have found their groove, extending their winning streak to two games with a 3–1 victory at RIMAC Arena against the California State University, Monterey Bay Otters.

The Tritons current win-streak was preceded by back-to-back 3–0 losses. Though UCSD won its last game against California State University, Dominguez Hills 3–0, questions still hovered around the team. Was their last win a new normal or an aberration? Could they replicate their last performance?

After a promising start to the game, it seemed like UCSD was reverting back to their old ways. In the third set, leading the game in sets 2–0, the Tritons seemed to be allowing the Otters back into the game. In the first two matches, the Tritons got early in the game and never relinquished the lead, leading to 25–18 and 25–13 finishes. Now, in set number three, UCSD was struggling to even get a lead. Head coach Ricci Luyties made it clear to his team (and everyone watching) that he was not happy with their performance: pacing the sidelines and throwing his hands up in exasperation on each mistimed block or missed dig.

“I was frustrated because we gave a lot of errors at the end there,” Luyties said. “Not that [CSUMB] wasn’t making plays, but we compounded it by making some errors just giving points away.”

By the fourth set, the Tritons seemed to brush off the memory of the third set and returned to their early game form. The scene on the sidelines had calmed, with Luyties nodding approvingly as his team got up to an early 7–0 lead. Senior outside hitter Sidney Tekstra and senior middle blocker Jessica Rieble had key plays at the end of the fourth set to take the Tritons to a 25–18 lead, winning the set and giving the game to the Tritons.

Luyties did make one key lineup change for the final set, replacing starting senior libero Alyson Penrose with junior outside hitter Emily Hubbard. “[Penrose] wasn’t receiving serves as good as she normally does so we went with [Hubbard] to take her spot, who did really well in her spot passing,” Luyties said.

Though Luyties was disappointed with last week’s losses, he feels that the experience of being down and coming back to win was good for the team: “We’ve had a couple of tough losses in a row there, especially the one at home so we really had to recover,” Luyties said.“I think we did a good job in Dominguez Hills and seeing how they react after that as well after losing and coming back and playing well … I thought they did a good job.”