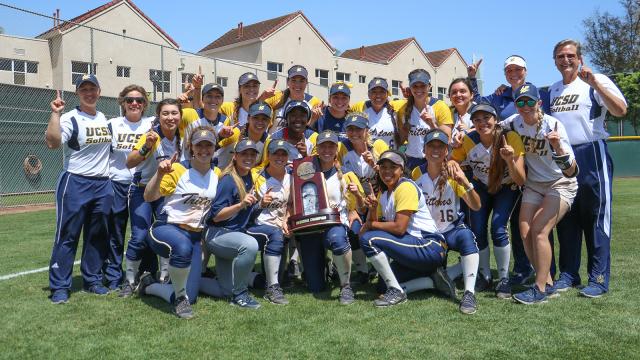 After a rough start to their playoff campaign, the UC San Diego softball team battled its way through the NCAA Division II West Region, taking four of five games in their sub-regional round at Triton Ballpark and sweeping the best-of-three super-regional round against the top-seeded Concordia University Irvine Eagles on the road with 9–1 and 4–3 wins to advance to the NCAA Division II Championship Tournament, which is played at the Metropolitan State University of Denver.

The team flexed their offensive muscle in game one, smacking 8 hits and walking 3 times on their way to victory. Despite the lopsided offensive output in the first game of the super regional, sophomore left-handed starter Robyn Wampler was the real star of the game for the UCSD Tritons. Wampler shut out the opposition for the first five innings of the game before finally surrendering a run in the final inning of the ballgame.

While the first game of the tournament saw the Tritons put up a 6-run sixth inning to make the game far out of reach, the second game ended up being much closer. In the bottom of the seventh inning of game two, the game was tied up: 3–3. UCSD was at bat with bases loaded and 2 outs. Junior right fielder Mikaila Reyes stepped up to bat, knowing that she had a shot at winning the game. When the pitch came, Reyes hit it hard to left center field. As she rounded first base, she turned back to see her team climbing out of the dugout to celebrate. With that hit, Reyes sent junior shortstop Danica Kazakoff home, giving the Tritons a 4–3 lead and ending the game. UCSD had won the NCAA Division II West Super Regionals and punched their ticket to the NCAA Division II National Championship.

After the marathon super regional round finale, head coach Patti Gerckens let out a sigh of relief in the post-game press conference. “I’m glad there are only seven innings in a game … [both teams] kept fighting and grinding.”

While the biggest moment of the super regional was Reyes’ walk-off hit to send the team to Denver, the entire team was beaming when they hoisted their West Region championship trophy over their heads at Triton Ballpark on Friday night, to the joy of the few hundred faithful UCSD fans in attendance.

Outside the walk-off hit, the Tritons had many stellar individual performances in the second game. Senior third baseman Maddy Lewis and Kazakoff both contributed 1 hit and 1 run apiece. In addition, Reyes had 2 hits and 2 RBIs, which included the final single to left center field that closed out the series.

In the post-game press conference, Reyes described her feelings as she stepped up to bat for the final hit. “I was seeing the ball really well … and I wanted retribution to end the game.” Reyes was also quick to credit the effort of her teammates, saying, “It would have meant nothing if nobody else had gotten on [base] before me.”

The team will take on the Augustana University Vikings, the No. 3 seed in the tournament, on Thursday, May 23 at 6:30 p.m. CST in what is sure to be a battle.

One thought on “Softball Wins the West, Advances to DII Tournament Championship”