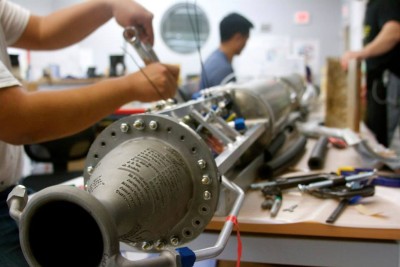 From Nov. 1 to Nov. 3, Students for the Exploration and Development of Space at UC San Diego hosted this year’s SpaceVision networking conference, one of the largest intracompany networking events in the world available for students. Run entirely by SEDS students, the event drew industry recruiters and SEDS members from across the country into the Town and Country Hotel in Fashion Valley to mingle and share their ideas.

Lockheed Martin was the title sponsor of the event, with other companies including the Boeing Co., Analytical Graphics Inc., and Virgin Orbit assisting with the event’s financial needs.

Founded in 1980, SEDS is an international student-based organization focused on the promotion of space exploration and development through educational engineering projects. Currently, SEDS is comprised of 86 chapters across the United States and several dozen international chapters.

The UCSD chapter of SEDS was founded in 2012 by Deepak Atyam, Benjamin Liu, and Joshua and Kenneth Benedictos. According to their chapter’s website, these founders helped create the first 3D printed rocket engine made by a student organization.

Eric Shnell from SEDS UCSD told the UCSD Guardian that their chapter is focused primarily on technical aspects over everything else.

“A lot of other groups [in SEDS] focus overall on expanding awareness, teaching people about space, stuff like that, doing their own stuff for appreciation,” Shnell said. “We don’t do that as much. We just focus more on the engineering side of things.”

Shnell stressed that this did not mean that other chapters weren’t as competitive in their field.

“Lockheed [Martin] and companies like that still need marketing teams or recruitment people, so those people are still valuable,” Shnell said, “but we feel that engineering is more our focus, so we strive toward that.”

Tabling at the conference were startups Rocket Lab and Additive Rocket Corporation, a company founded by former SEDS UCSD members.

“People who come to our tables are not so much looking to get a job, but are more looking for guidance. We’re like the cool uncle, you know? People kind of come out of their shell,” Director of Product Development for ARC Alec Kochis said, “Where bigger companies are like the Budweisers at these events, we’re more like the craft breweries focused on making the perfect product. We’re really passionate about the craft.”

This weekend’s SpaceVision is the 12th annual conference, with last year’s being hosted at the University of Central Florida. Arizona State University has been selected to host the next conference in 2019.