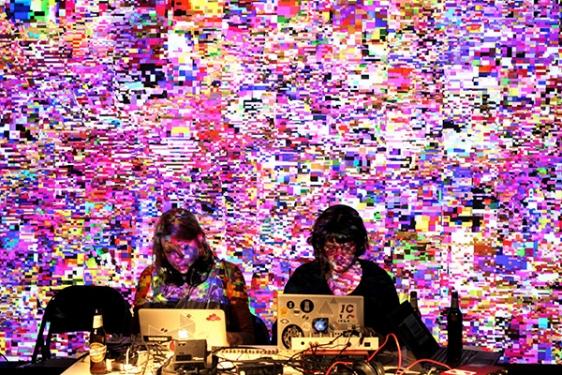 Performative coding is a musical art form in which the coder/composer’s live source code is projected alongside a set of visuals or music created by said code. This creative display of a programming language unintelligible to the audience seeks to expose the humanity behind the work. Yet, while praising the collaboration and transparency apparently inherent in performative coding, coder Shelly Knotts, along with her accompanying composers, failed to maintain the audience’s attention and appreciation during the event due to its chaotic mash of competing, random sounds and lack of an understandable explanation for the coding on screen.

The coding performance event took place on April 5 in Atkinson Hall at UC San Diego. In the first live presentation, coded and organized by the Orchestra For Females And Laptops, six internationally-based female performers exuded a disarray of hollow beats, unsettling purring and clicks, deafening rocket launches, screeching birds, and high-pitched, 10-minute long feedback. While the projected chat box between the six members amusingly broadcasted their frantic attempt to find and quiet the source of the electronic disruption, listeners were left with a shocking 20-minute pandemonium in the dark.

Afterward, Knotts admitted to the difficulties of attempting to balance the sounds generated from the various composers yet emphasized the elevation of equality and participation in collaborative live coding. As a director, she holds the task of assessing and dramatizing the dominant characteristic noises from each producer, yet Knotts lacks control over the individual decisions and contributions, allowing room for the unruliness present in the performance.

Such a synergy between coding composers, however, drastically contrasts to that of solo live coding, performed by Knotts herself after OFFAL. Describing performative coding’s freedom of control and individualistic perspective, Knotts further elaborated on its origins in Mexico City as a project between large groups of “blank slate live coders” who sought to create without any guides or preparation. She underlined the significance of criticism received through such platforms in shaping her optimistic approach to her budding work.

Knotts’ second performance subtly mimicked electronic dance music, accompanied by hi-hat variations, fading tenor hums, and intensifying cadences. As opposed to OFFAL’s clash of sounds, Knotts melded layer after layer of looping and complementary tones, gradually designing her own style according to her perception of the audience’s desires. Yet, instead of using a chat board, she displayed her source code, which remained largely incoherent to its consumers. Rather than providing comments as a way of offering context or aesthetically forming the code to at least gratify a visual aspect of the performance, Knotts exhibited a clump of letters, numbers, and random symbols, barely squeezed into the frame.

Thus, while raving over her cyberfeminist, open structure of performative coding, Knotts’ two presentations demonstrated the raw infancy of the cooperative concoction. Though still evolving, it struggles to attract and answer the musical appetites of this generation.

One thought on “improv.exe: Forging New Music on the Code”