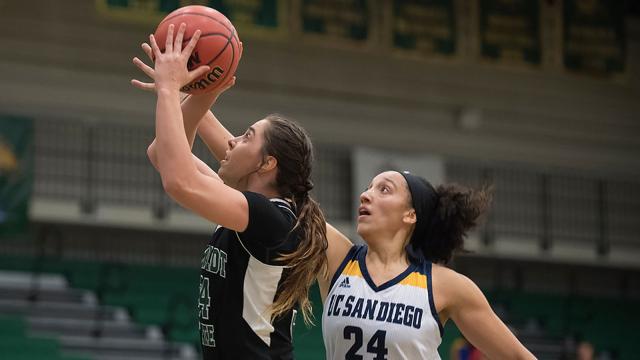 As the number one seed in the tournament, UCSD hosted its first game against Sonoma State and after beating them twice already throughout the regular season, and it was no different in the win-or-go-home game. The Tritons overpowered their opponents, 69–52 as they eased their way to the next round of the tournament behind the 22 points and 10 rebounds from sophomore forward Mikayla Williams.

After one quarter, only 5 points separated the sides. However, the second quarter had UCSD written all over it with a 12-to-5 point discrepancy. The Tritons continued to extend their lead in the last two quarters and had no problem closing the game out.

A big difference in the game came to be the 3-point shots as UCSD shot the 3 at 46 percent while holding Sonoma State to 10 percent. Four of the 6 successful 3-pointers from the Tritons came from junior guard Joleen Yang, who finished with 12 points.

UCSD came out the gates with conviction and did not let up as it earned a spot in Saturday’s final with a dominating win over Chico State, 67–48. Sato led the charge for the Tritons with 22 points, 4 rebounds, and 3 assists.

The Triton defense made the difference in the game as it held the Wildcats to less than 50 points and to only 32 percent shooting.

In the second quarter, the Tritons exploded on offense as they scored 28 points to the Wildcats’ 14 off of 66.7 percent shooting, including 4 of 7 from the three point line. The third quarter was much of the same as UCSD scored 21 points while shooting 77 percent and outclassing its opponents. Those two quarters put a bow on the game as going to the fourth UCSD held a 32-point lead and had the game all wrapped up.

Incredibly, the Tritons went ice cold in the fourth quarter and only managed a single point off a free throw, while giving up 14 points. However, the lead was in no danger as they still won by 19 points.

Only seconds away. A few seconds and a Jovanah Arrington 3-pointer separated the Tritons from a conference title. After a back and forth game, a game–winning 3-pointer stabbed UCSD in the heart for a 76–75 loss in the CCAA tournament final.

With an 8–point lead in the final 3:17 of the game, the Tritons could not hang on to their lead as their offense could not get anything going with only three points in those final minutes of the game. In that same amount of time, the Lumberjacks went on a 12–3 run to earn the title.

UCSD did not start the game on the right foot as Humboldt could simply not miss from anywhere on the court. Humboldt shot 62.5 percent from the field, including a scorching 66.7 percent (6–9) from the 3-point line to hold a 27–18 lead going into the second quarter. After only shooting 30 percent from the field in the first, the Tritons came back strong in the second as they shot 50 percent, while holding the Lumberjacks to 33 percent. With the defense holding its own in the second, UCSD went into halftime with a four point deficit.

Coming out of the half, the Tritons had another strong quarter defensively and managed to hold a 2-point lead going into the final quarter. The lead extended early in the fourth, but it was not to be for the Tritons in the end.

Sato had a game–high 22 points, while Sampton and Williams added a combined 25 points and 31 rebounds.

Both Sampton and Williams were named to the CCAA All–Tournament Team.

Despite the loss, the Tritons’ season is still alive as they will likely be competing in the NCAA Division II Tournament West Region. Check the 64–team bracket posted on the NCAA website for the final matchups.