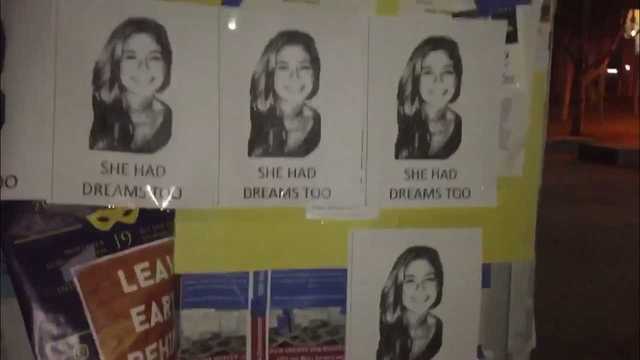 Flyers of Kate Steinle were posted across the UC San Diego campus on Dec. 7 following the court ruling in which José Ines Garcia Zarate was acquitted of her murder. The posters were minimal, bearing only a picture of Steinle’s face alongside the words “She Had Dreams Too” —  a phrase reminiscent of “We Are All Dreamers,” the slogan adopted by advocates of Deferred Action for Childhood Arrivals.

Zarate, an undocumented immigrant who had been deported from the United States five times prior to Steinle’s death, was found guilty by the San Francisco County Superior Court of being a felon in possession of a firearm, which he had stolen four days prior to Steinle’s death. Those representing Zarate in court maintained that she was killed by the accidental discharge of Zarate’s firearm, which resulted in the bullet ricocheting off of the pavement and striking Steinle.The jury did not find Zarate guilty of murder. Anti-immigration advocates have rallied against the ruling, using Steinle’s death to argue for stricter immigration enforcement by asserting that she would still be alive today, had Zarate not been allowed into the United States.

Hung by UCSD student Gregory Lu, the posters commemorating Steinle quickly became a subject of controversy and were denounced by student organizations as racially insensitive.

“I hoped to remember Kate Steinle and her tragic death, as well as create dialogue in regard to illegal immigration on our campus,” Lu told the UCSD Guardian.

The posters were created as part of a project by Right Wing West, which Lu described as “an organization comprised of College Republicans across the West Coast who are eager to further campus activism in promotion of conservative ideas and values.”

“We at Right Wing West are completely against the verdict,” said Lu, who is also a member of the UCSD College Republicans. “Kate Steinle’s death would have never occurred if our borders were enforced better, considering [Zarate] had been deported five times already.”

Among those protesting the posters are the UCSD College Democrats, who have issued a statement referring to the posters as “racist propaganda” and a “gross distortion of tragedy.”

“The posters, and actions like the posters, further [the] agenda of ostracizing Americans of color,” said UCSD College Democrats President Aidan Beals, a sophomore in Eleanor Roosevelt College. Beals referred to them as an example of “the alt-right’s use of Kate Steinle’s death as a dog whistle for racist groups to organize against undocumented people as a larger attack on immigrants and people of color in this country.”

“We find it appalling that the College Democrats and other left-leaning entities would so quickly defend the actions of an illegal immigrant, five-time deportee, and convicted felon as opposed to the life of an United States citizen,” the UCSD College Republicans stated.

An incident report against Lu has been filed with UCSD’s Office of Prevention of Harassment and Discrimination, which exists to “promote an environment in which all members of the UC San Diego community can work, learn and live in an atmosphere free from all forms of bias, harassment and discrimination.” Lu has not yet met with the office. According to Beals, the report was not filed by the UCSD College Democrats.

As stated by Robert Nelson of the Education Advisory Board to the Guardian, the consequences of racist behavior on college campuses are determined by “the university’s right … to punish those students that they can identify who were involved in the incident, [it] rests more on the university’s right to regulate student conduct than it does on constitutional issues.”

According to the OPHD, complaints of discrimination and harassment are resolved through formal investigation or alternative resolution.

“In this particular case, no formal investigation has been planned at this time,” wrote the OPHD.

Lu has contacted an attorney as a preventative measure, should the university pursue legal action.

4 thoughts on “Student Hangs Posters of Kate Steinle on Campus, Is Subject of Incident Report”