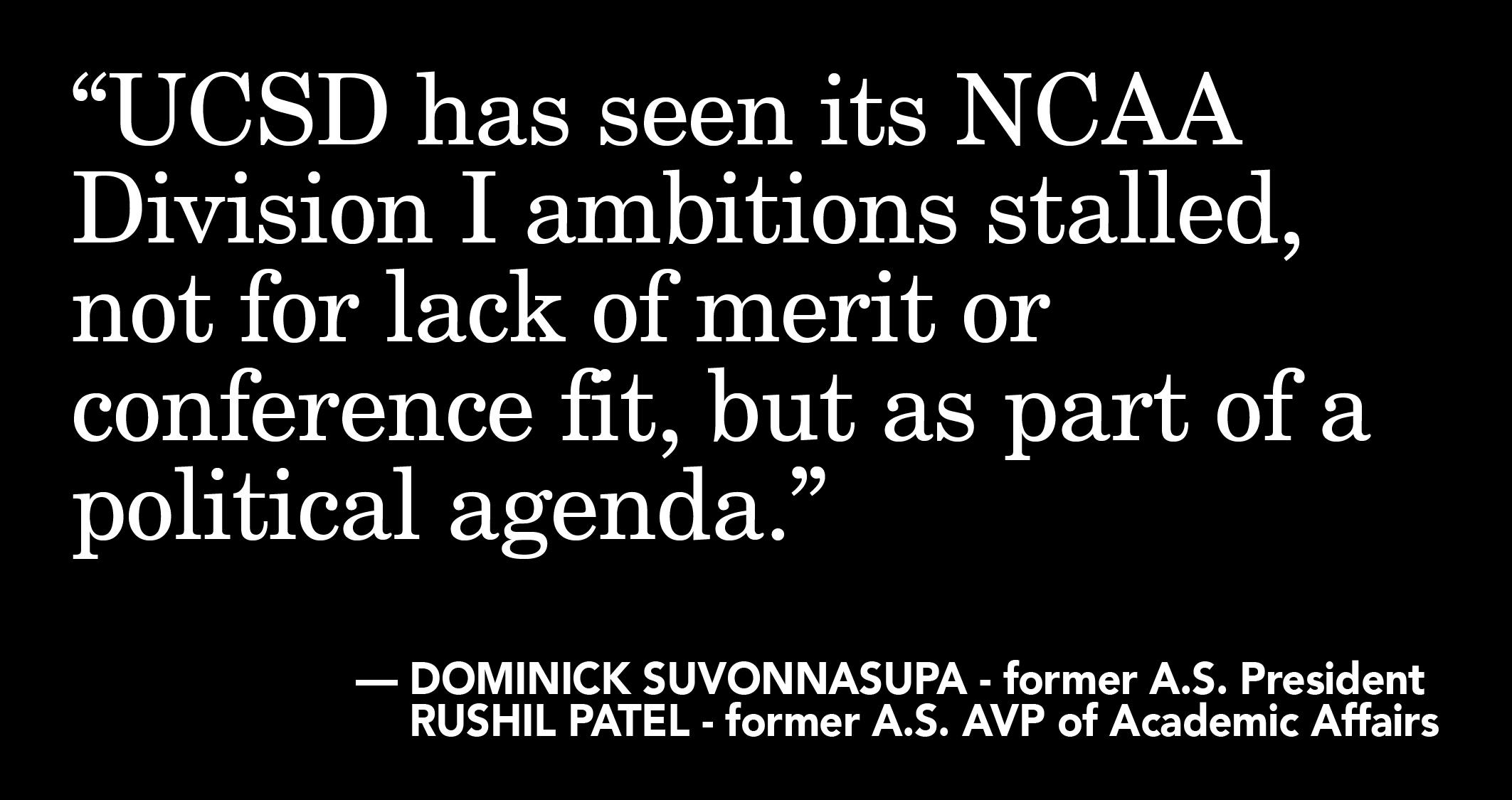 In Winter Quarter 2016, the Associated Students of UC San Diego voted to bring an NCAA Division I Referendum into the hands of the student body. After an 8,828 student voter turnout and 70 percent “yes” votes, which represented the largest electoral turnout in recent years and a clear-cut margin, the students had voted that the University reclassify to Division I. Shortly after the referendum vote, the Academic Senate was charged with reviewing the move as well. The Senate voted to side with the students and made it clear that UCSD as an institution was ready to make the transition into D-I athletics.

As the University was making preparations to begin the transition, an unexpected hurdle presented itself: the Big West Conference did not extend UCSD an invitation for membership, which is required for application to NCAA Division I. This came as a shock to many. According to the San Diego Union-Tribune, Big West Commissioner Dennis Farrell explained that the conference “has not been in expansion mode.” This news created a lot of confusion for many students and faculty. The Big West had signaled interest. On paper, the University was ready to move on to D-I. Our athletes were already competing at a high level and this would enable them to compete with similar institutions.

When looking at the composition of the conference, it is evenly balanced between UC and CSU schools, with four of each as well as a ninth school in the University of Hawai’i at Manoa. Seven of the chancellors or presidents in the conference needed to approve the move in order for UCSD to be admitted. Numerous sources have indicated that the UC Chancellors voted “yes” while the Cal State Presidents voted “no.” There is reliable speculation that the Cal State schools opposed UCSD’s membership as part of an ongoing effort to gain conference membership for Cal State Bakersfield. Thus, UCSD has seen its NCAA Division I ambitions stalled, not for lack of merit or conference fit, but as part of a political agenda.

Despite this setback, the fight for Division I is far from over. It is up to the next generation of students, faculty, and administrators to keep advocating for D-I and to work with the Big West to find a way. It was exhilarating seeing the enthusiasm of the students and faculty upon passing the referendum. Knowing that Division I membership can enhance the undergraduate experience and give a sense of togetherness, we hope that students can remain enthusiastic. We felt extremely hopeful based on Chancellor Pradeep Khosla’s recent comments in the San Diego Union-Tribune, but more importantly, about his commitment to ensuring that the student and faculty voices are being heard. It’s reassuring to know that in this specific issue — one that is so important to the students and the entire University — the administration is supportive and proactive in fully utilizing its power to represent the students.

We are hopeful that our chancellor will continue to facilitate discussions with the Big West. According to the referendum, UCSD still has one year and five months to get an acceptance bid from the Big West Conference. We have overcome hurdles to get this far, and we need to persevere until we have made NCAA Division I a reality.

One thought on “Moving Forward with Division I”