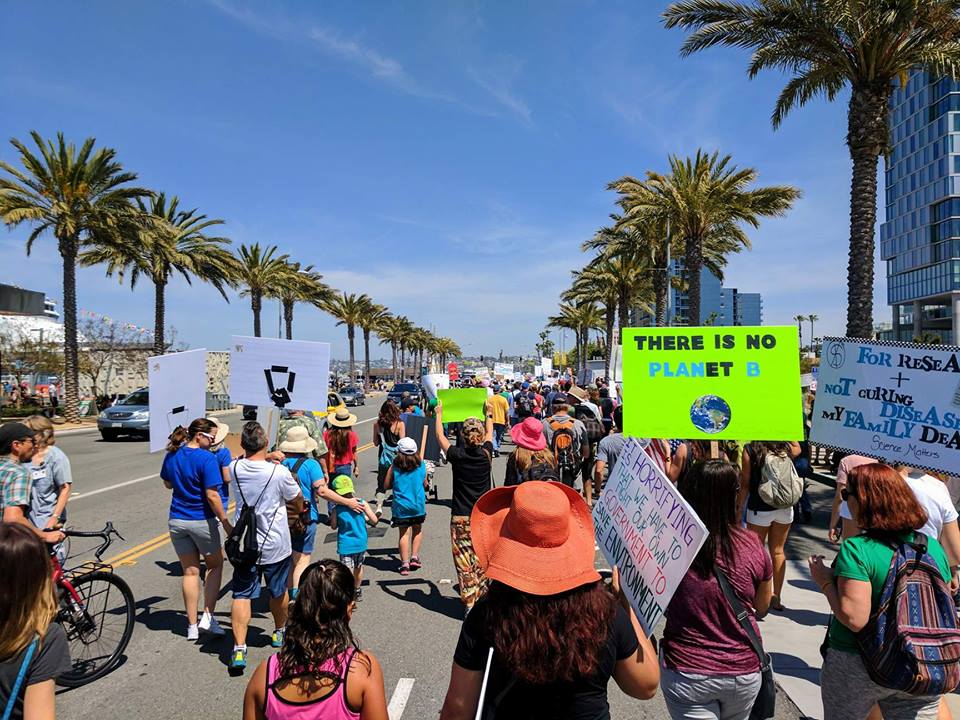 Over 15,000 scientists and science enthusiasts took to the streets of downtown San Diego on Earth Day, April 22, to raise awareness of the contributions of science to society and the importance of supportive public policy. The demonstration featured speakers from research and technology institutes, schools and universities and Congressman Scott Peters.

The one-mile march began at the Civic Center and ended at the Waterfront Park where various exhibits were hosted by the Fleet Science Center, the San Diego Natural History Museum, the Scripps Institute of Oceanography and many more

The march in San Diego was one of 610 demonstrations across the nation and the world, whose coordinators were motivated by the success of the Women’s March on Washington. The organizers were additionally spurred by the threats to scientific for open communication with the broader public.

James Koren, a participant of the march, believes that scientists need to be embedded into the policy-making procedure since they’re the knowledgeable ones.

“Scientists especially have an important place to speak to people running the country right now and tell them what the facts are,” Koren told the UCSD Guardian. “Hopefully scientists are able to inform policy makers and policy makers have enough intelligence to listen because if you want to know what’s going on with ocean-warming you don’t ask some senator; you ask someone who has studied it their whole life.”

“Science is a non-partisan tool used to improve people’s lives in every single way,” Vargas stated. “Improving the accessibility, communication and funding of the scientific community can only help us progress health and technology even further.”

Volunteers with the San Diego 350 were present to promote the People’s Climate March that will take place April 29 in downtown San Diego. Jeffrey Meyer from the San Diego 350 is also a volunteer park ranger for Lake Poway Ecological Reserve and echoes Vargas’ sentiment that issues in science shouldn’t be partisan.

“There’s a misconception about the march being another anti-Trump rally, but it’s the furthest thing,” Meyer said. “We’re trying to make it out of politics because it’s not about politics, nor is it a partisan issue; it’s about science, and next week’s march is about climate change.”

Meyer added that the demonstration is vital to showing that people care.

“I hope the public can recognize how important it is to be visible,” Meyer said. “If you’re not visible, the decisions that are going toward running the country won’t reflect what the majority of people want.”

There were also many scientists involved, and Jannelle Rivera, who works in biotechnology, marched for science outreach and communication.

“I want to be able to talk to people who don’t know anything about science and get them excited about it because science is true no matter what,” Rivera said. “Someone without a background in science isn’t going to understand scientific papers, scientific findings, so scientists including myself need to learn how to speak in lay terms.”

Director of the Center for Brain and Cognition and Distinguished Professor at UC San Diego Dr. V.S. Ramachandran spoke at the event and wants people not to overlook the simple joys of learning in science.

“Advancing technology and fighting global warming are all extremely important but shouldn’t eclipse the aesthetic dimension of science,” Ramachandran stated. “We’re curious and we ask the fundamental questions to discover how things work and how the world works.”

However, Ramachandran acknowledges how crucial funding is to not only drive advancements but as basic salary.

“Grants are important because they give you freedom — financial freedom,” Ramachandran said. “You can’t exude any creativity and do science unless you have tremendous leisure and don’t face financial pressure to make ends meet.”