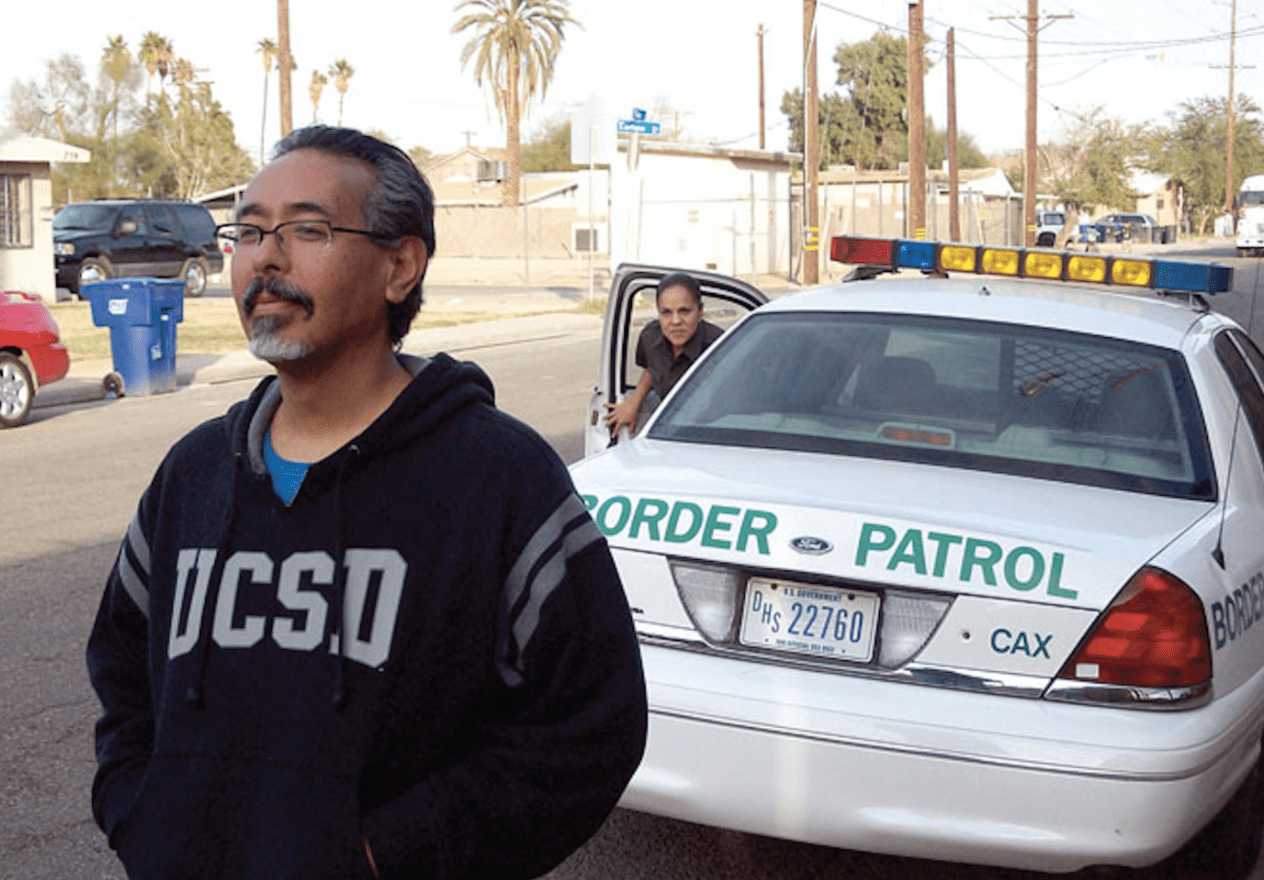 As a professor his passion for art is evident through his lectures, delivered with a loud booming voice which resonates throughout the lecture hall. His dedication and genuine affection for performance art is contagious and leaves students with a longing to understand more.

He embraces the uneasiness and apprehension that often comes with discussing more existential topics like the nature of existence or what it means to be human. More than anything, Professor Ricardo Dominguez asks questions, forcing his students to think for themselves and ponder the nature of their own lives.

Born in 1959, Dominguez came of age in the sixties and seventies, a turbulent era for global politics. Watching constant televised footage of the war in Vietnam, Dominguez was intrigued by the way in which his childhood friends reacted to both real events on TV and simulated ones, seemingly unable to detect the difference.

“For them watching the Vietnam war on TV was like watching some comedy show. I remember taking them to a double feature of Godzilla and they became sick and traumatized, not realizing that Godzilla was constructed, not real,” Dominguez said. “Seeing how these kinds of things were constructed, I became interested in visual effects and narrative,” Dominguez told the Guardian.

Dominguez also traced his fascination with art and performance to growing up in Las Vegas. Gambling culture, of course, was an ever-present force in Las Vegas, and Dominguez found himself surrounded by disillusioned casino-goers searching for escape in a variety of simulated environments.

As he grew into a teenager and young adult in the ‘70s and ‘80s, Dominguez became increasingly disillusioned with the political system, spurring his interest in activism. Reaching across his desk, he presented his arm, pointing to a triangle shaped scar on his arm.

“I still have a burn from when I was a kid. It’s a triangle of an iron that my mother dropped on me when they announced JFK was killed.” Dominguez went on to recall, “I was only about 11 or 12, but I certainly realized that Nixon and the Watergate incident were f—ed up. I thought, ‘Do you people really want to vote for him? This seems to be a really bad guy.’”

He also remembers Reagan and his lack of action in response to the AIDS crisis, crediting the little action his administration did take to a bunch of “young queers” who fought its recognition. Dominguez himself worked with AIDS Coalition to Unleash Power for many years, which were some of his formative experience in protest.

“An activist’s job is one that is terrifically difficult. An activist may think in [terms of] 10 years … but people are in jail right now. They can’t think about a gesture that is 10 years in development.”

Dominguez has made his name in the art world for a signature blend of his two passions, art and activism, which he dubs “Artivism.” Though he also practices “in-the-streets” activism, he believes there is a great distinction between that brand of protest and Artivism.

“An activist’s job is one that is terrifically difficult,” Dominguez said. “An activist may think in [terms of] 10 years … but people are in jail right now. They can’t think about a gesture that is 10 years in development.”

Dominguez himself prefers the slower approach to activism, a crucial component of Artivism.

“The artistic practice,” Dominguez explained, “is a slower form of contemplation … My practice can have activist outcomes, like the Transborder Immigrant Tool. But, it was built over a long period of time. The university tried to de-tenure me. Congress said we were traitors to the nation.”

The “Transborder Immigrant Tool” he referred to was a piece of artistic protest he introduced almost 10 years ago. He placed mobile phones containing GPS locations of water and food packages in the California desert to aid Mexican Immigrants attempting to cross the border. The standout aspect of this tool, however, was the fact that the phones contained experimental poetry.

Because Dominguez was an artist and a poet, his work blurred the lines between protest and art. Different agencies such as Congress and the FBI attempted to make a distinction between cyber war, cyber crime, cyber terrorism and “electronic civil disobedience,” as he calls the Transborder Immigrant Tool. The trouble came when they were unable to classify Dominguez’ project into one of these categories.

“We disturbed the conditions by which the utilitarian laws of cyber crime were being defined, and said, ‘No, there’s this other territory,” Dominguez said.

Due to the implementation of art and creativity into Dominguez’ work, his projects have enjoyed enduring success. As he explains it, a vital component to creating art and fostering creativity is critical thinking. Dominguez finds that critical thinking of the type practiced by the politically active is a skill that can only be acquired through the study of arts and humanities.

The current social climate is extremely divided, especially under the the Donald Trump presidency. However, Dominguez finds hope in the recent spate of protests.

“You guys are going to have to live with these consequences and feel the effects of them for a long time. It’s always been the radicalism of the community that has had a vision and often willing to risk for that vision.”

About a month ago, he participated in the anti-fascist protest at UCSD. Sharing some advice about activism, he commented, “I think, to a certain degree, protest comes naturally. The real elements of crowds and power is durational: How do you sustain this question or critique over a long period of time?”

“You have social media now … you can use Tinder or Facebook for political hookups,” Dominguez commented.

He insists that, to effectively aid activism, it is best to stick to your impulses and fields of interest.

“I would ask myself, what impulse do I have in what direction? As a writer? As a journalist?” advised Dominguez. “You don’t always have to activate your protest and work just through protesting in the street. One layer is just talking to your friends about what’s happening, another is writing about it.”

Through all of his previous work in the artistic and political fields, Dominguez has achieved results through sheer drive, creativity and critical thinking. He concluded by discussing the most important function of activist art.

“The artistic practices focused on asking critical social questions … and power has a great fear of the politics of the question,” he said.

We are currently hiring new writers. Click here to apply.

One thought on “The Professor Who Fought Border Patrol with Poetry”