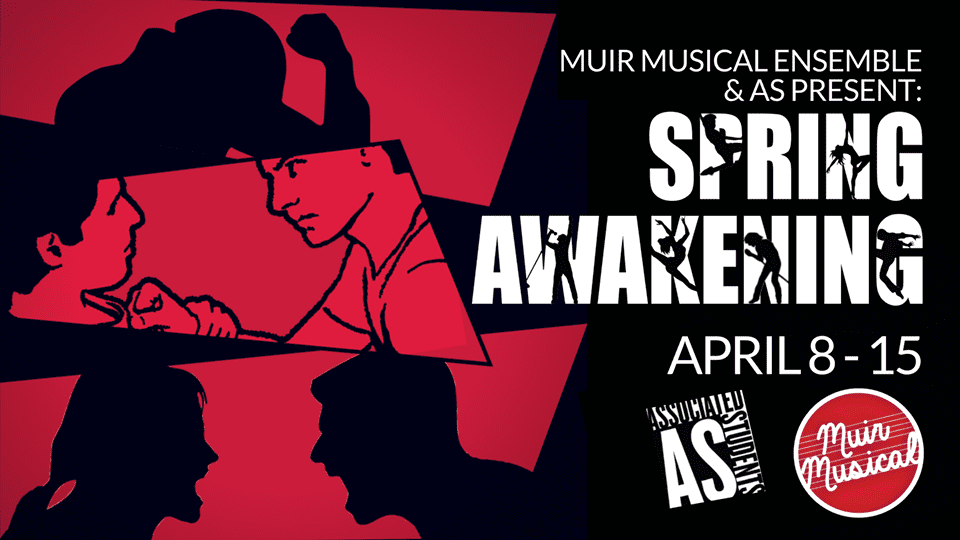 The annual Muir Musical Spring Awakening opened on Saturday night and will continue to perform throughout the week, concluding with a special matinee performance on April 15. The annual student-directed and produced musical theater event is the largest on campus.

This year’s performance is based on the 1891 play of the same name, which Director Nicole McEntee describes as a coming-of-age story.

“It centers around adolescents exploring their sexuality and identity,” McEntee told the UCSD Guardian. “They face taboo topics as they try to understand what it means to be in this world while being suppressed by adults or the system of adults.”

McEntee believes that these issues are still prevalent today, despite how readily available information is.

“Although we are exposed to a lot of knowledge through social media and the internet, there are still so many people who don’t know what sex is, or feel like they can’t talk about their sexual preferences,” McEntee said. “This show focuses on the those trying to understand what they’re feeling but can’t because they don’t have people answering questions for them, or they don’t feel like they can ask questions in a safe space.”

Spring Awakening debuted on Broadway in 2006 as a rock musical set in 19th century Germany and has lyrics derived from scriptures from the Bible and other literature. McEntee explained that the difference between setting and accompaniment furthers viewers’ understanding of the performance.

“The scenes take place in the 19th century even though the songs are very contemporary and modern,” McEntee said. “This contrast between being in the present versus being in the past isn’t used to further the plot like in most musicals, but is used to get an inside look into the characters’ minds.”

“I thought the musical was thought provoking, and the dance was a curious but interesting addition,” Lin said. “Even though the setting was 19th century Germany, the issues brought up are still relevant today.”

McEntee mentioned that the interpretive dancers were an addition that she hoped would further the connection to the character’s’ subconscious.

“I felt that adding a lyrical dance ensemble to visualize the emotions the characters are experiencing would be a beautiful combination, essentially letting the characters have a mirror image of themselves,” McEntee added. “As you sit and watch a song being sung, you see dancers communicate what is going on with their body … and I hope it’s something that will really add to the show.”

McEntee also said that in order to adequately represent and address the tumult of adolescent sexuality, the cast and team utilized resources on campus like CARE at the Sexual Assault Resource Center, LGBT Resource Center, and Counseling and Psychological Services.

“We’ve been meeting with SARC, LGBT, and CAPS to do workshops with our cast,” McEntee explained. “We wanted to get a deeper knowledge of the themes of the show so we can better communicate that to our audiences.”

The show has mature content that McEntee maintains is crucial to the experience.

“There’s going to be a lot of people that come in and feel uncomfortable, maybe love the show or hate it,” McEntee said. “But I think that’s the beautiful thing about theatre — you’re supposed to just come and feel something, and maybe spark knowledge and discussion.”

Performances took place at 8 p.m. on April 8 and April 9 and will continue from April 13 to April 15 in the Mandeville Auditorium. Tickets can be purchased in person or online at the Box Office. Talkbacks with the actors and creative team will take place on April 13 and April 14 to encourage audience members to engage with the show’s material and presentation.