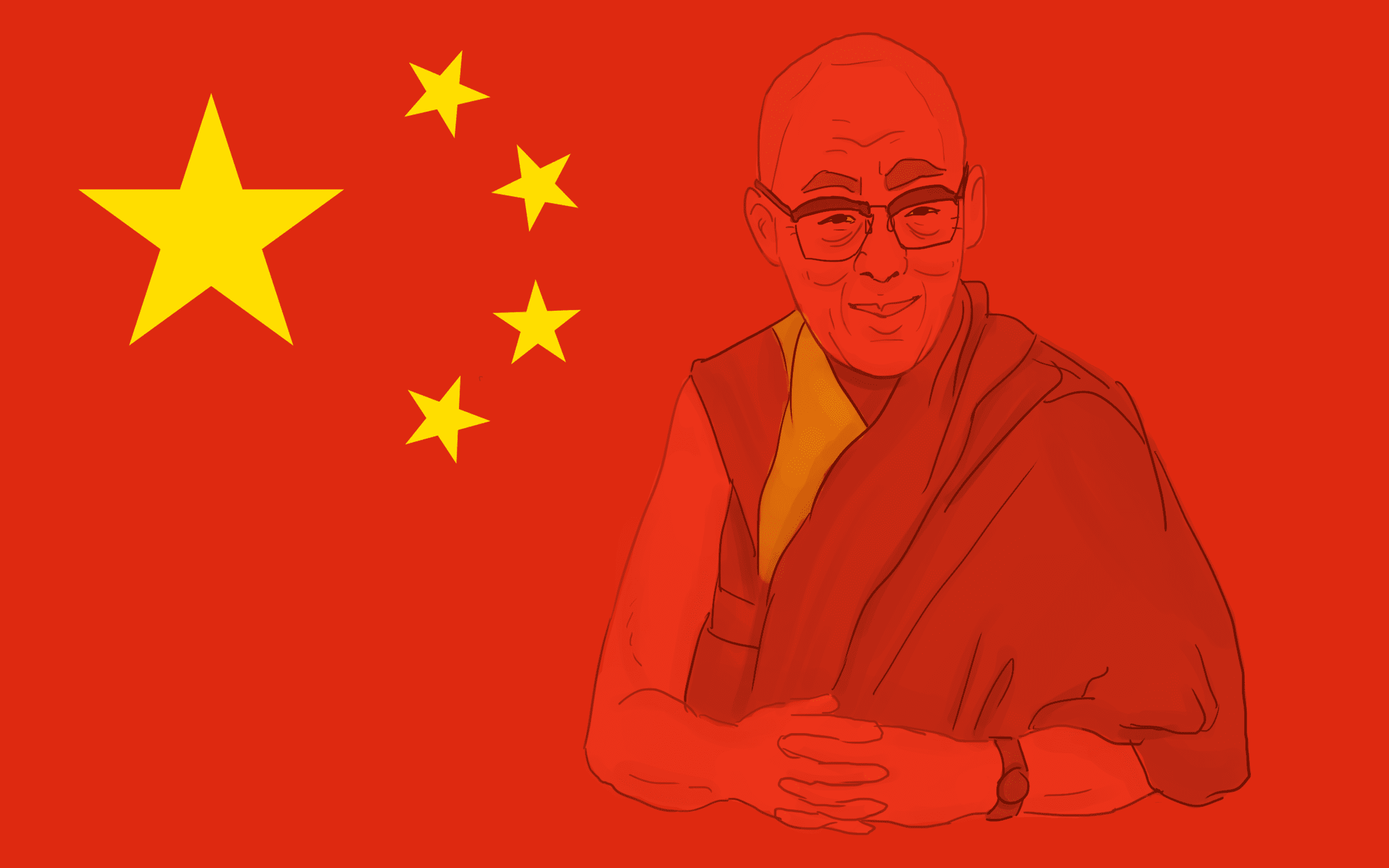 The warm scent of coffee wafted out of Price Center’s Starbucks as I sat outside in the breezy air, waiting for Yuki Huang, a second year at Revelle College. While we bantered, the name of her home province in China, Fujian, came up and, remarking at my pronunciation, she asked if I could speak Mandarin.

I could; it was the first language I was taught as a child. But as an American-born Chinese, I also lacked the cultural knowledge of my country’s history to adequately explain Chinese international students’ recent outrage over the 14th Dalai Lama speaking at this year’s commencement. Daughter of a doctor and civil servant of the Chinese government, Huang attempted to explain her perspective to me.

“Almost every international student dislikes [the Dalai Lama],” she started off, “because he is to China what Edward Snowden is to America. We all regard him as a traitor.”

I winced, telling her Edward Snowden was a personal hero of mine. Without missing a beat, she clarified to me, “Maybe the Western media portrays him as a spiritual leader who loves peace, but in reality he is definitely involved in all types of politics. He wants to be a dictator in Tibet; he doesn’t really want to liberate Tibet but wants to control Tibet through violence.”

Before I even opened my mouth to say anything about Chinese media, she stopped me. “I’m not brainwashed by propaganda or anything,” she said to me, giggling. “I don’t watch news that often.”

Huang tried to give me a quick history lesson, explaining that Tibet was historically part of China. According to her claims, Tibet under the Dalai Lama had a feudalist system that perpetuated slavery and serfdom, with a small elite in control. The Tibetan government asserted that the serfs’ status was a result of its misdeeds in a past life, preventing them from protesting their living conditions. A war broke out in 1950 between the People’s Liberation Army of China and Tibet; the Dalai Lama, who supposedly wanted to control Tibet through a violent authoritarian regime and was backed with weapons by the CIA, escaped to India. Now, while China attempts to modernize Tibet by sending in workers and eradicating an outdated culture that supports slavery, the Dalai Lama continues to spread propaganda in an attempt to retake control of an independent Tibet.

Facts related to Tibet and China are murky, but much of what Huang told me appeared to have a basis in fact, or at the very least, to be truer than many versions of history I’ve heard. Peter Hessler from the Atlantic, who visited Tibet in the 1990s, claims in “Tibet Through Chinese Eyes” that while Tibet’s claims for independence might be “more compelling than the Chinese version,” China probably has a “stronger historical claim to Tibet than the U.S. does to much of the American West,” citing Chinese rule of the region dating back centuries. Reports of a serfdom in Tibet are also concerns which, while perhaps exaggerated, may not be completely invalid either: While Tibetan scholars in the West are in agreement that there was no historical serfdom, the Chinese assert that “95 percent of the population were hereditary serfs and slaves owned by monasteries and nobles,” as cited by Hessler. Furthermore, the Tibetan government under the Dalai Lama engaged in some human rights abuses of its own: for instance Lungshar, a political figure who challenged the conservative elite in the 1930s, had both eyes gouged out for allegedly plotting a coup. Accusations that the Dalai Lama has been used by the United States to fight the Chinese government are not unfounded either. As tensions between the U.S. and communist regimes ran high in the 1950s, the CIA did indeed support the Dalai Lama with propaganda distribution, intelligence and political espionage to counter Chinese influence in Tibet.

As an English teacher at the Linzhi No. 2 High School two years ago, Huang had personal experience living in Tibet. She was one of many teachers from various provinces sent to Tibet along with others who helped build the region’s infrastructure. Defensively, Huang told me that Tibetans enjoy far more rights than other Chinese citizens and their capital city is developing even faster than her own home province, thanks to support from the Chinese government.

“They can stick with their marriage culture and marry more than one person. The United States doesn’t allow Mormons to do that, but we allow Tibetans to.”

For Huang, the invitation of the Dalai Lama to commencement is an insult. Passionately, and despite the fact that she is not graduating, she reminded me that commencement is a time of celebration.

“International students have to celebrate their graduation, and they will invite their parents. They will fly all the way from China to the U.S., and when they are so happy, they’ll see this guy who tries to split their country giving a speech here.”

Some students, especially online, have attempted to silence Chinese international students by telling them they have no place to complain about commencements speakers in a school where they are “guests.”

“This is discrimination,” Huang said angrily. “Just because we’re foreigners, we’re not treated as part of the UC community. Our voices deserve to be heard.”

The next week at the same Starbucks, I talked to Yuxiao Fang. Since it was a drizzly day, we sat inside. Fang, a junior cognitive science major from Xian, China, was quieter than Huang but talked rapidly. Like Huang, he started off with an analogy about the Dalai Lama splitting his home country.

“You don’t want anyone to split [your country] in any way, just as you wouldn’t want Texas to be an independent country from now on.”

I grimaced at the analogy, personally knowing plenty of people at UC San Diego who sure wouldn’t mind. Sitting up, I ask him what he thinks when people suggest the Dalai Lama inciting violence is Chinese propaganda.

“You say it’s Chinese propaganda, but it might be international propaganda against China,” he said nonchalantly. “Every coin has two sides. Check both when you make a decision.”

As a junior, Fang, like Huang, won’t actually be attending commencement, and he knows that it is unlikely that UCSD will uninvite the Dalai Lama as speaker, citing damage to our school’s reputation, since we invited him first. Instead, his goal is to start a conversation between students and administration. He hopes that UCSD will consider students’ opinions when making decisions—especially, he claims, when wrong decisions can be hurtful to their future career prospects.

“I’ve heard of a college that had the Dalai Lama come to commencement, and afterward, one of the Chinese students came back to China to look for work. During [this process], his HR just said, ‘I heard your college commencement speaker was the Dalai Lama so I can’t give you a chance.’ Not only is it hurting our feelings, it’s hurting our professional careers. That’s a rare case, but I mention it as a possibility.” Though the Dalai Lama indeed spoke at Tulane University in 2013, a source could not be found to verify this anecdote.

Huang and Fang both vehemently support free speech. Fang cited it as the reason he is making his voice heard. He explained that if UCSD can invite the Dalai Lama to commencement, then students can tell everyone how they feel about the event. Huang wished that UCSD invited the Dalai Lama to a different event instead, so that students could choose whether to attend. Of course, graduating seniors can indeed choose to not attend, but who wants to miss commencement?

At the end of the day, I was still left confused by what the facts were. Pages about these controversies are long and dense, and fact-checking this article proved to be nearly impossible. For example, simply checking if slavery existed in Tibet was difficult: Sources supporting China claim that Tibet, prior to 1959, had a population that was 95 percent serfs. This is the same viewpoint Huang and Fang tried to give me. Other sources, such as Heidi Fjeld’s Commoners and Nobles, argues that the situation in Tibet was more analogous to a caste hierarchy, or that the Chinese government did not improve the situation by invading and that Tibet was well on its way to reforming itself. These sources contend that China’s imposition of their communist regime on Tibet has resulted in worse human rights violations and the suppression of Tibet’s buddhist tradition. I still don’t know what the truth is. But you don’t have to have a strong opinion on the affairs of Tibet and China to lend an ear to other students who have something to say about it.

Other sources to read:
Friendly Feudalism: The Tibet Myth, by Michael Parenti. Published January 2, 2007
This Was the Perilous Trek to Tragedy, by Frank Bessac. Published in LIFE, November 13, 1950
Human Rights Violations in Tibet, Statement by Elliot Sperling. Published by Human Rights Watch, June 13, 2000

Have questions? Have a story for us to cover? Email us at [email protected]

48 thoughts on “Why Chinese International Students Hate the Dalai Lama”