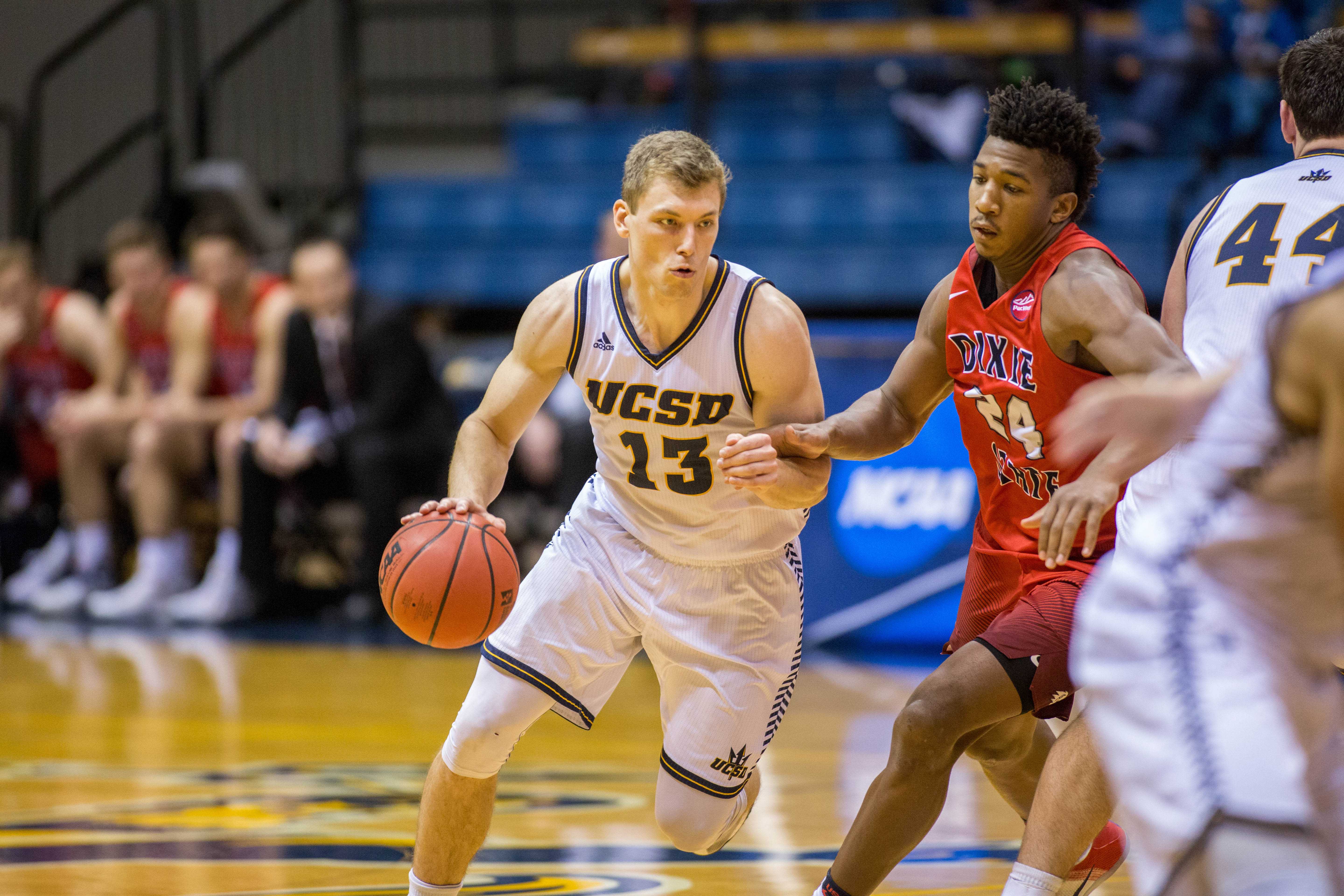 The UC San Diego men’s basketball team participated in the NCAA Division II West Regional tournament quarterfinals and semifinals last week. The 19th-ranked Tritons were the first seed entering the tournament. UCSD took down Dixie State and California Baptist University to advance to the finals against Chico State. The team easily defeated Dixie State in the quarterfinals but had a nail-biting game against CBU in the semifinals.

The Tritons blew out Dixie State 94–68 thanks to a stellar three-point shooting performance from senior guard Aleks Lipovic. Lipovic led the team in scoring with a game-high 21 points, all of which came from behind the arc. The other starters, senior guard Adam Klie (10), junior guard George Buaku (13), sophomore guard Christian Oshita (13) and sophomore center Chris Hansen (12) all scored in double digits. Klie also dished out a career-high nine assists while Hansen notched a double-double with 11 rebounds to match his 12 points.

UCSD made a total of 17 three-pointers on 42.9 percent (17–38) shooting. The team took care of the ball relatively well, only turning it over six times. The Tritons grabbed 14 more rebounds than the Trailblazers, seven of which were offensive boards.

Junior guard Trevor Hill led Dixie State in scoring with 16 points. The Trailblazers went 50 percent (25–50) from the field, but only made three of their nine attempts from downtown.

The first three of the game for the Tritons came at 18:31 in the first half courtesy of Lipovic. The Triton guard’s three gave the team a 5–2 lead that it would build on. UCSD was relentless in its attack and grew the lead to 17 with 1:26 remaining in the half with a layup by junior forward Michael Shoemaker. However, three free throws by the Trailblazers cut the lead down to 14 heading into the second half.

The closest Dixie State ever got to bringing the game back was at 18:44 in the second, when redshirt senior forward Marcus Bradley made a layup to bring the game to 46–33. From 18:44 on, the Tritons maintained control of the game. UCSD’s biggest lead was a 29-point 94–65 lead with 0:34 left to go. The last bucket made was by Trailblazer junior forward Kyler Nielson at the 0:27 mark to bring the game to a 94–68 Triton victory.

The Tritons were evenly matched against the Lancers. The game came down to crunch-time free throws, and UCSD pulled through to beat California Baptist 84–80.

Klie led the team with 22 points on 10–14 shooting. Buaku and Hansen chipped in 17 points apiece, and Lipovic scored 12. The team struggled to stay out of foul trouble: Klie, Oshita, and Hansen had four fouls each, and Shoemaker fouled out.

CBU was led in scoring by senior guard Michael Smith, who scored a game-high 39 points for his team. Smith single-handedly kept CBU in the game, playing all 40 minutes of the game and almost willed them to the victory.

UCSD started off the first half strong and were able to build a 10-point lead with 9:16 remaining. However, CBU fought back to take the lead 38–36 courtesy with a right-corner three by Smith with 0:31 remaining. Neither team scored after that, making the score 38–36 going into halftime.

The second half was a back-and-forth affair; neither team was able to secure more than a five-point lead until the 7:44 mark, when Lipovic made a layup to give UCSD a 64–58 lead. CBU kept on fighting and cut the lead down to three at the 6:36 mark. At this point in the game, the momentum was beginning to shift in CBU’s favor. However, the Lancers were unable to capitalize on the change in momentum. The pace of the game had slowed down and most possessions were ending up at the free throw line.

Smith missed two free throws at the 5:05 mark that would have brought the game to a five-point difference. At this point, CBU switched from a man-to-man defense to a 2–3 zone defense. This switch caused some initial problems for UCSD, and the team turned the ball over due to a shot-clock violation with 4:35 remaining.

CBU pushed the pace in an attempt to score quick baskets and take the lead. However, UCSD was slowing down the game with its substitutions. The Tritons were taking advantage of every dead ball and subbing in offense for defense and vice versa.

With 0:33 remaining, the Tritons called a timeout to set up their inbounds play to get a different player the ball. Out of the timeout, UCSD found Buaku the ball and CBU fouled Buaku to stop the clock. Buaku hit both free throws, but Smith answered with a layup. The Tritons went to Buaku again, who was able to convert only one of the two free throws. Fortunately, UCSD forced a turnover by Smith. The ball found its way to junior guard Anthony Ballestero, who was immediately fouled. Ballestero sauntered over to the free-throw line with a very confident swagger. He casually knocked down his free throws, both of which hit nothing but the bottom of the net. Ballestero’s free throws iced the game at 84–80.

UCSD will play the sixth-seeded Chico State in the finals on Monday, March 13. Tip-off is scheduled for 7 p.m. The winner will move on to the Elite Eight, which will take place March 22 to March 25 in Sioux Falls, South Dakota.