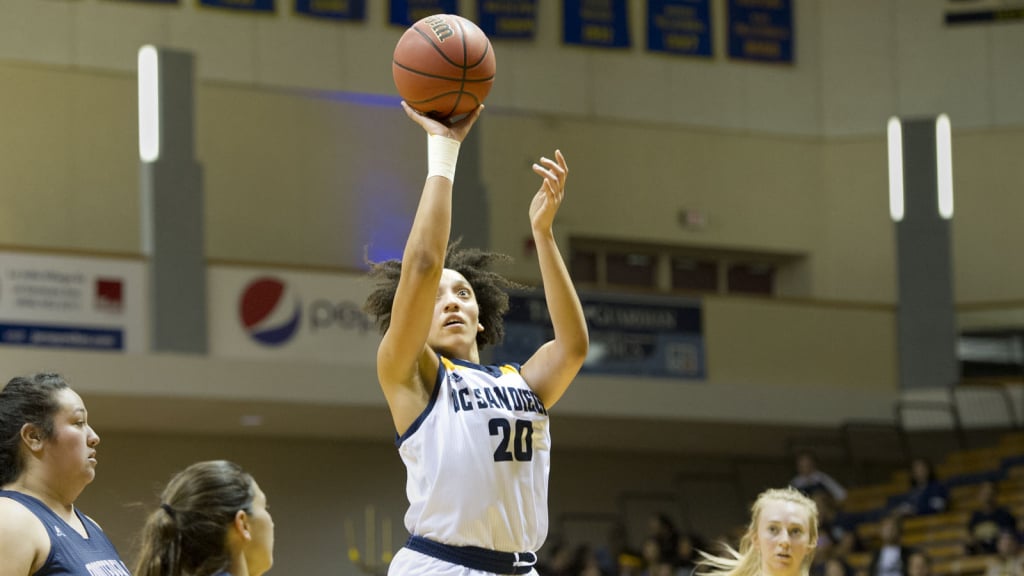 With a few UC San Diego women’s basketball alumni in the stands showing up for the game, like Farrah Shokoor (‘16), Stephanie Yano and Miranda Seto (‘15), the women’s basketball team put on a clinic to dispense of Cal State Monterey Bay on Spirit Night. The final score, 75–53, was representative of a night in which UCSD never really worried about its opponents making a comeback, controlling the flow of the game or winning the rebounding battle.

With junior starting guard Taylor Tanita sitting the game out because of an injury, the Tritons rolled out a starting five of senior forwards Beth Mounier and Cassie MacLeod, sophomore guard Joleen Yang, junior forward Dalayna Sampton and junior guard Paige Song. Sampton opened the game strong, with back-to-back baskets, putting the Tritons up by four early into the game. On the following play, MacLeod blocked a shot attempt from Monterey Bay and started a fast break that ended with an easy layup for Yang. Cal State Monterey Bay’s senior guard Victoria Dorn had a good start to the game and brought it to 7–13 with a tough mid-range shot before the first timeout of the game. However, Dorn was held in check for the rest of the game, going 3-for-10 from the field. Redshirt freshman forward Mikayla Williams made sure of that by blocking her next shot attempt. The guard combination of junior Aubri Smith and sophomore Jordana Price shouldered the load for the rest of the quarter for the Otters. Price contributed by banking in a three-pointer to bring Monterey Bay within three. The Tritons continued to push and finished the quarter up 21–16.

To open up the second quarter, UCSD went back to its starting five, except with Williams in place of Sampton. On the Otter’s first defensive possession, they forced an air ball by the Tritons with their zone defense. Smith imitated her teammate by banking another three for the Otters. Yang answered her with a go ahead three-pointer, and after an outlet pass from Mounier to senior guard Haley Anderson for two and another three-pointer by the Tritons, UCSD pushed the lead to seven. Up 30–26 with 4:17 left, Williams scored two more points on a power move and added an and-one on the next possession to bring the Tritons to an eight-point lead, prompting a timeout with 1:30 left. MacLeod scored a layup after the timeout to bring the Tritons to a double-digit lead, but the Otters answered. UCSD went into halftime with a 37–29 lead.

The Tritons continued to put pressure on the Otter defense, and Sampton powered her way through to another basket. On the next possession, Sampton scored yet again on a layup. The third quarter was the Sampton show as she corralled an offensive rebound off of Mounier’s miss and, with a quick step and dribble, put it in the basket. MacLeod contributed another basket for the Tritons just before the end of the quarter to finish the quarter with a 57–40 lead.

“We made it a point to be the aggressor today,” Sampton told the UCSD Athletics Department. “Our team really toned that in and took advantage of some of this madness.”

Although the game seemed out of reach for the Otters, they continued to fight, with Smith putting in another shot from behind the arc. After the first timeout of the quarter, Williams stole the ball away from the Otters and sent it down-court to Mounier for the easy basket. UCSD continued to score points, and a pass from Anderson ended with a corner three by sophomore guard Marcella Hughes, bringing to score to 66–49. With the game under control, UCSD let its bench players get some game time. Sophomore forward Shandiin Armao profited from the minutes, scoring an easy layup and an and-one to bring the lead to over 20 points. With all the substitutes in the game, history will remember that freshman guard Sydney Sharp scored the last basket of the night for the Tritons.

With the win, the Tritons brought their win streak to 13, and despite Saturday’s loss against Cal State East Bay, they remain solidly on top of the California Collegiate Athletic Association standings at 13–2, two games clear of Cal State East Bay in second.