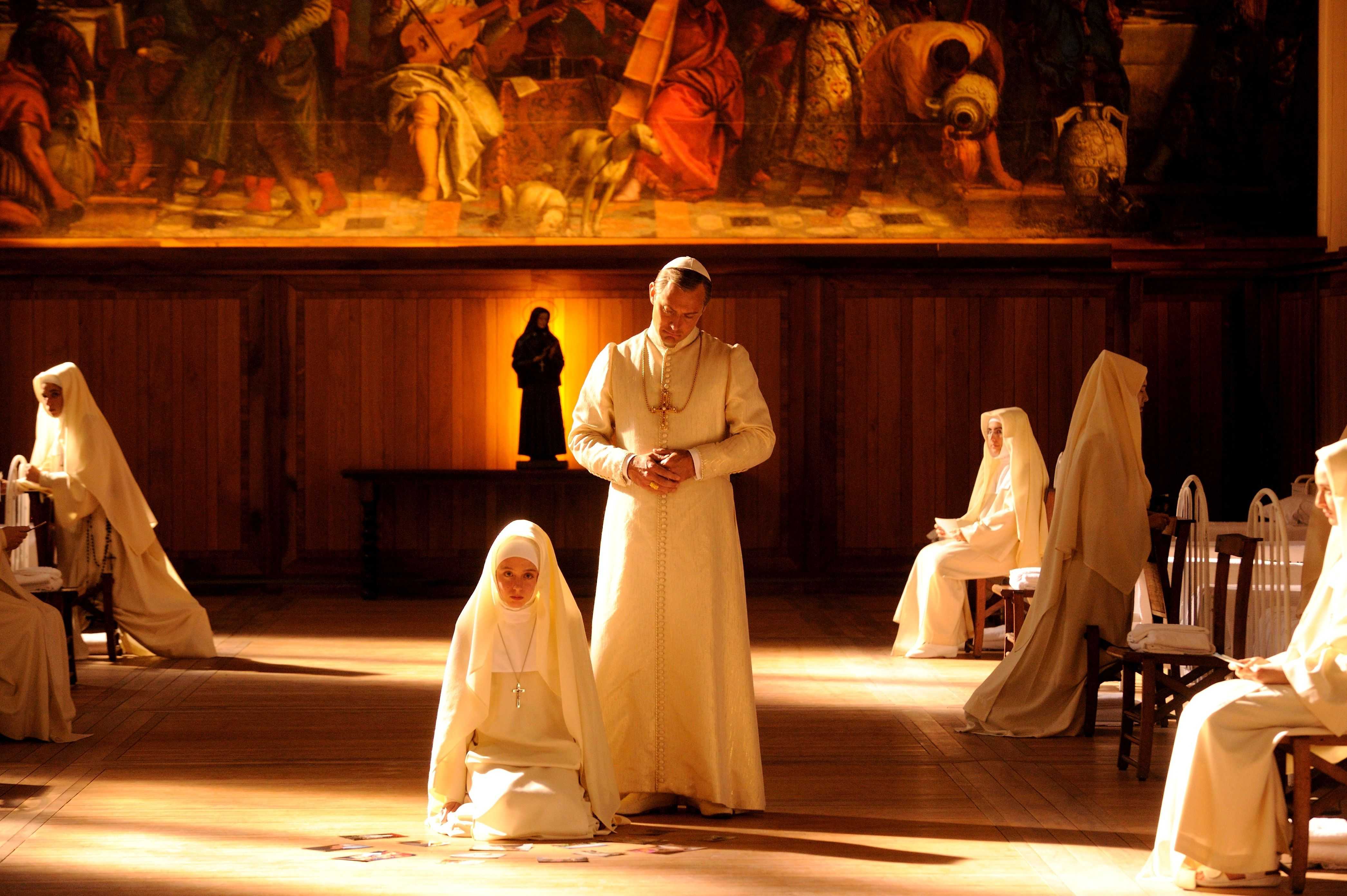 A camera pans, gently rotating from a television displaying the Italian “X-Factor” to a couple at a laminated table, looking paradoxically intrigued and bored. Soft wailing accompanying a contestant’s refrain of “Hallelujah” hints at the presence of a child. There are none on-screen. Then, slowly, a white robe, a hand and, finally, a face, emerge from the edge of the frame. Pope Pius XIII (Jude Law, blue-eyed and inscrutable as an angel or a priest) sits beside them, cradling a baby. Surprise. For a moment, all three — and infant — occupy a single scene. In any other series, “X-Factor” included, such a sequence would beg plausibility and tax the viewer’s implicit suspension of belief.

We make agreements with the shows we watch: Be consistent, make emotional sense and we’ll keep on trucking. “The Young Pope” takes that unspoken rule, rams it into a hearse and drives the hearse into a lake. The word “absurdist” has appeared in articles concerning director-producer Paolo Sorrentino’s newest creation with ever-increasing frequency. It’s true, though. No one knows what to think about this veritable buffet of costuming and cinematography, topped off with a positively baroque soundtrack that mixes modernity with age.

It’s a baffling, stunning visual bouquet so strangely disarming as to verge on facsimile of “serious” cinema. Then again, how else to approach the most daunting topic in the world? Religion isn’t easy. Sorrentino spares himself the trouble of propriety and dives right into Lenny Belardo’s ludicrous sojourn as the pope.

The spry and youthful archbishop of New York comes into the most powerful office of Roman Catholicism and causes a storm in the process. His colleagues and former supporters, Cardinal Angelo Voiello (Silvio Orlando) and Cardinal Michael Spencer (James Cromwell), are dismayed by their new pope’s reclusion and antiquarianism. The former quality is particularly troublesome for Sofia (Cecile de France), head of marketing for the Holy See since the pope refuses any image branding and public appearances, to her horror. The latter leads to a charming anti-homosexual witch-hunt and a hardline anti-abortion statement on Belardo’s part. To his dismay, the liberal Italian prime minister takes issue with the changes, threatening to cut away the substantial tax monies of which the Church is a beneficiary.

Nonetheless, the pope perseveres even in the face of public disapproval. He brings his ersatz mother, Sister Mary (a warm, earnest Diane Keaton), to serve as a personal secretary. The good sister is surprised to find orphan-boy Belardo a preening, profoundly uncertain man. Other ghosts of the past include Cardinal Andrew Dussolier (Scott Shepherd), Belardo’s only remaining childhood friend, and Archbishop Kurtwell (Guy Boyd), whose pedophilia becomes a searing issue for the papacy.

Oh, and there’s a kangaroo — the Australian government flies it to Belardo as a gift. The prime minister of Greenland, on the other hand, only drums up a popular Italian singer’s CD.

Installed in his office, the pope grapples with potential romance: the wife of a Swiss Guard, Esther (Ludivine Sagnier), whose pastoral charms tempt Belardo off the proper path. It’s a heady cocktail of scandal, and Belardo dances with disaster every episode. “The Young Pope” is intoxicating, deplorable and, at the oddest times, a solemn treatment of a curious and singular institution.