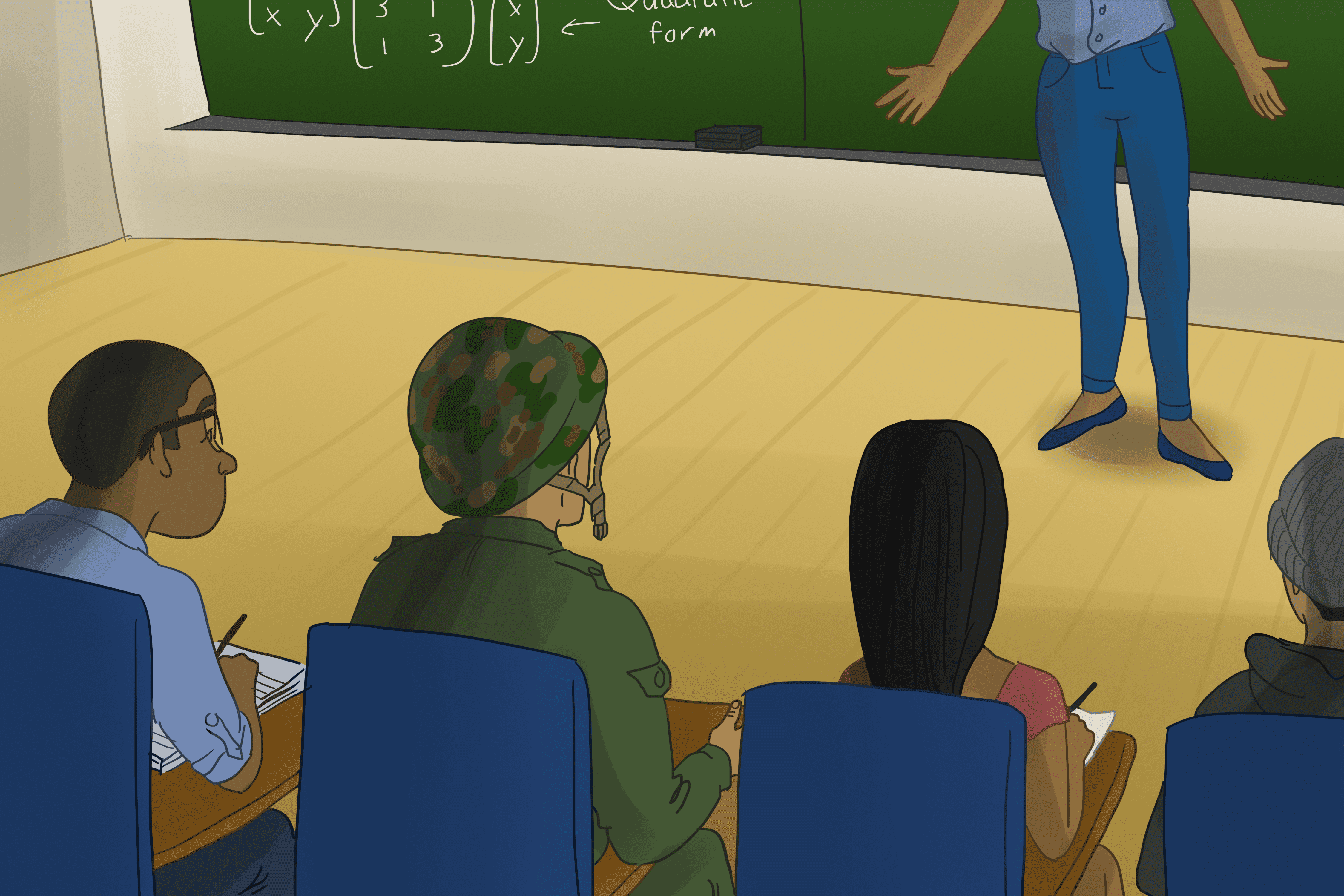 Known for its honorable character, the student veteran community at UCSD is comprised of some of the most diverse and experienced students on our campus. Their status makes them unique, but it also comes with a considerable number of challenges.

A Difficult Transition: From School to Service and back to School Once More

Muse joined the navy right out of high school in 2006, serving two years in Guam. He came back to San Diego in 2008 and served on active duty for three years. Once off active duty, he started going to school at Grossmont and joined the reserves, which he is still a part of today.

“When you transition from high school to college, you get used to never having a break — school year round. But once you’re done with school and you start working it’s a different story. Our average work day ranges from 12 to 16 hours. [You] come in at 4:30, 5:00 in the morning and leave at 6:00 at night, but then when you get off, you’re off. And you don’t talk or think about work again. You think, ‘Man, I left school but this sucks.’”

Muse became an avionics technician in the navy and decided to later pursue electrical engineering at UCSD. He transferred in 2014.

“By the time you get here — because very few people leave community college and just start at the university, almost all of us are transfers — you think to yourself, ‘OK, calculus. I haven’t done calculus in what, eight years?’ You experience this at the community college level too. I mean some of them, that’s why they joined the military. Either high school grades were bad or wide range of differing family lives. [Still], some got full rides and wanted to join the military anyways. But when you leave an academic setting for so long, it’s hard to come back.”

A lot of veterans are much older than the average student on campus — or even the teaching assistants. They range from ages 27 to 35, an age difference that comes with its own set of advantages and disadvantages.

“Being older is kind of a catch 22 because you get a better idea of what you want to do in life, and you get more mature in the sense that you got a little bit of the partying out of your system. We definitely still party, but you rationally and objectively manage your time better. If you were to look at veteran attendance in non-mandatory sessions or discussions it’s probably in the 90th percentile. They’re usually the first ones in the class and normally sit in the front. Their maturity allows them to take advantage of their resources, and a lot of great things come out of that.”

At the same time student veterans often feel as though their age can be an impediment at a four-year university.

“You often feel like Billy Madison in class since you’re much older than everyone else, and when you transfer here, you only have two years. It’s tougher to build rapport with your professor and get an internship in comparison to someone who’s been here for five years. You lose a little bit there.”

The SVRC has been open for about two years, but most veterans are still quite disconnected from one another. According to Muse they’re just starting to build a stronger bond.

“When I was the president, one big thing I tried to get people to do was come in here and utilize the amount of student [veterans] we have on campus, which is about 1,000 people. The first year it was strictly veterans, [but] then we started to encourage people to bring in study partners or groups. Now we’re starting to see people who are not veterans at all. A lot of the time they’re older students like us so they just feel like they connect with people here. I think this allowed a lot of the veterans to lose the mentality of ‘These civilians, I can’t stand them’ or, ‘These kids, I can’t stand them.’ So it’s really been a good thing in terms of transition and socialization, if you will.”

Drawbacks: A Lot of Work Still Needs to be Done

Although progress has been made in regard to the SVRC connecting student veterans, there are still quite a few challenges facing the veteran community at UCSD.

All the other UC campuses allow their veteran students to apply for regular, relatively cheap grad housing, but that isn’t the case with UCSD. UCSD provides family housing for those who are married or with kids, but veterans who are single have to find a place off campus, which tends to be expensive, or choose to live in the Village, which has its own set of problems.

“Living on campus is an option, and you could go back to sharing a room, but the military is a lot like your first couple years of college in regards to the dorms. You have to live in the highly inspected barracks and you share a bedroom with somebody. So to go back to a room sharing thing is a pretty big regression on its own. You’re also 28 and sharing a room with someone who’s 18 or 19. In the barracks if you had friends who were underage or your roommate was underage, you couldn’t have alcohol in there. If you gave it to somebody who was underage or they took it without your knowledge it’s still your fault. You were almost always caught, and that was the end of your career. It’s an instilled fear that translates over to living on campus as a student veteran. When I was president of the Student Veterans Organization, we were trying to get regular grad housing. It hasn’t been completely worked out yet, but it’s in the right process.”

About half of the student veteran population has children, but the waiting list at the school for child care is about two to three years. By the time you get accepted, you’ve already graduated.

“I don’t know how to fix this one, so I rarely bring that one up, but it’s a big deal to a lot of people because it’s discouraging if you want to live by the campus. If your kids are school age, that’s great, there’s some great schools here, but if they’re pre-school age, well that’s horrible because the most expensive day cares in the city are all here in La Jolla. So then you have to fight traffic to drop them off elsewhere. There needs to be some type of access, especially for student veterans with disabilities, so that they can be prioritized into these services.

Working with the VA

A lot of student veterans working with the VA Hospital are still getting treatment and have the benefit of the VA Hospital being right here on campus. That being said, there are major complications in regards to timing.

“We have everything ranging from veterans who need brain surgery to those injured from explosives to a lady who jumped out of a helicopter and broke both of her ankles. She constantly will make it [to] week seven, week eight, and then the VA will call and say, ‘You have surgery next week.’ Their issues with the VA are their own, but they’re at least common knowledge enough to say, ‘Well, if I don’t take the one [appointment] that’s next week then I don’t get to have this surgery for another year maybe.’ Many [student veterans] end up having to drop all their classes or take incompletes.”

Positive Steps Forward: The SVRC on Accessibility and Diversity

The Student Veterans Organization has worked hard to make more resources accessible for students with disabilities at the SVRC.

“We know that veterans are not statistically self-help seekers. And we know that if we bring in counselors, representatives and all the services that the school provides, they can and will get help. In addition, whether it’s through a veteran organization general body meeting and we bring in financial aid, or through what we call ‘feast with friendlies’ where we bring different departments out and they get free food, we are continuously trying to promote more interaction and seek new connections.”

The Student Veterans Organization hopes these connections will result in new resources for the SVRC. Already, the SVRC has been able to create a diverse space of camaraderie and positivity.

“The resource center brings students together and creates coalitions of students. If you were to go into that room you would see people from arts and humanities majors to those in the STEM fields. You would think they were all working on homework together because one person will stand at the white board trying to figure something out and then randomly another person will help or correct him. You know we have this giant Diversity, Equity, and Inclusion requirement here, and this is a place you really get to see that come to life. I mean there’s not many places where you see every race represented, every sexual orientation represented and many different languages represented. It’s amazing, you really get a good petri dish of what DEI actually means, and it’s here.”