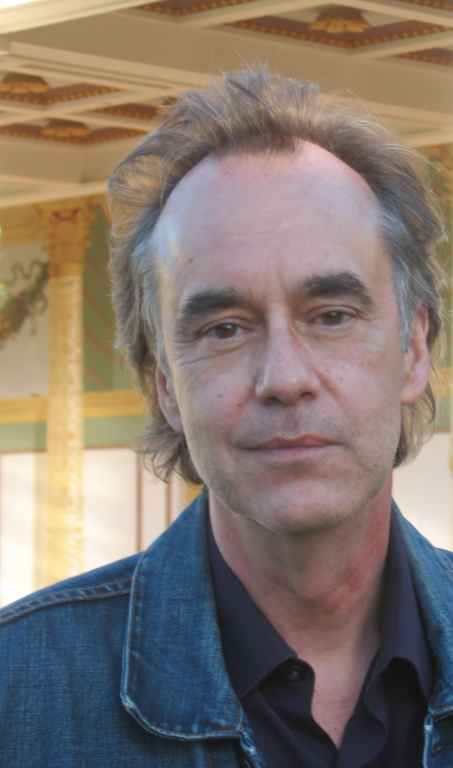 Tucked away at the end of a third-floor hallway in the literature building, you’ll come across a curious door. Plastered over it are mid-century publications, most in German, dealing with a variety of subject matter from Nazism to Nietzsche; the highlight is a large sign announcing “Leaving the American Sector.” This is the office of professor William Arctander O’Brien, the genial Bronx-accented literature professor who has taught a myriad of subjects at UCSD since 1986. Come to his office hours, and he’ll regale you with stories of Cold War-era Germany, post-structuralist theory and tales from a life dedicated to studying all forms of the humanities.

Born in New York City in the early 1950s, O’Brien found himself at the crossroads of two worlds from the very beginning. Though both his parents were educated in Ivy League universities, he grew up in a working class neighborhood that was decidedly less cultured. He often found himself at odds with his peers, particularly at the parochial Catholic school he attended, a place where he holds few fond memories.

“It was totally oppressive — it had students full of fear. We would get beaten up and worse,” O’Brien told the UCSD Guardian. “And, you know, that’s fed into the culture of the students themselves, who were pretty violent. I got beaten up a lot because I was the smart kid, and it wasn’t fun for me. A reign of terror is what it was.”

O’Brien found solace in this toxic environment at home, where his parents, both teachers, fostered a spirit of learning and education for him and his three siblings. He still feels a debt of gratitude to them for the unwavering support they provided early in his life.

“My parents saved all for their kids and spent it on nice schools for their kids — four kids. And we never knew that they were scrimping at all. Life was ok and they never mentioned ‘you owe me.’ They were extremely generous in that way.”

O’Brien switched to public school at age 15, attending Christopher Columbus High School in the Bronx. The new environment gave the young man a breath of fresh air. He could go to co-ed classrooms, deal with less uptight teachers and even start classes at 11 a.m., a good fit for his late-to-rise lifestyle.

It was also at this point in his adolescence that O’Brien, inspired by the rapidly changing culture around him, began to question the fabric of his Irish-Catholic upbringing.

He bought completely into the cultural revolution of the 1960s, becoming a “wacky hippie” for two years. Surprisingly, he didn’t even plan on attending college at the time — his path to academia began practically on a whim.

O’Brien started at Binghamton University in New York and, upon realizing that he loved life at university, transferred to Cornell two years later. There, after taking English and French poetry classes his first semester, the young upstart crafted his own liberal arts major: humanism and its literary expression.

One field that stood out to him in particular was German literature of the 18th century, particularly Romanticism. The budding Germanophile studied abroad his fourth year, taking intensive language courses with the Goethe-Institut in both Munich and Göttingen. Following a trip to Paris and receiving his BA from Cornell, O’Brien returned to Germany on a Fulbright scholarship and studied at the University of Stuttgart. Over the years, O’Brien has returned to Germany many times, studying manuscripts by writers and philosophers from Novalis to Nietzsche; most notably, he visited East Germany the year before the Berlin Wall fell. There he stumbled into a world that Americans at the time knew little about when a taxi driver invited him to stay at his house.

“The rest of this little research trip I went back to his house and got to know his family — and of course it was wild to have an American there. So I got to know his extended family and friends at parties where I would be the specimen of honor.”

His broad education and open mind won him many connections on the other side of the iron curtain, and his knowledge of Marx especially came in handy when he struck up a friendship with a committed communist. Despite initial apprehensions, he found the people of East Germany to be very inviting.

“People lived with the Russian and East German boot above their heads — very controlled society. But also, it was less developed than the West, and families were stronger and friendship was stronger, and people were warmer than the people I had dealt with in what was then called West Germany.”

After returning from Stuttgart he received his Ph.D. from the Humanities Center at Johns Hopkins University. For five years he taught in the German department at the University of Virginia, a place he came to loathe for being “racist and narrow-minded.” He finally came to UCSD in 1986 after answering a job advertisement that seemed to have his name on it: a position for someone who taught German as well as comparative literature and philosophy. Over the years he has taught on just about any subject imaginable, from German to comparative literature to classes on famous figures such as Bob Dylan and Edgar Allen Poe.

A common theme in O’Brien’s life seems to be his ability to relate to and bond with a diverse array of people, no matter their backgrounds. Through the years he has met several famous philosophers and personalities, including Allen Ginsberg, Claude Lévi-Strauss, Jacque Derrida and Timothy Leary. Many of them have become the subject of his literature classes, which he teaches in 25 to 30 student discussions. A conversationalist, O’Brien prefers the intimacy of these small groups because they allow him to bond with the students and have an active dialogue with them about the subject matter.

“Good teaching first of all begins with respect and care for your students. Not just as students, but as people,” he says. “All the students are people in your class, and your class is a group of people together. We should have a sense of each other as a group.”

Now in his 30th year of teaching at UCSD, O’Brien doesn’t see an end to his career anywhere in sight.

“The main reason is I love it, I really love teaching. Secondly, I need the money, so I’ll keep going for the money. But the main thing is I love it, I wanna keep doing it as long as I can, and I’ll stop when either I can’t do it or when students are no longer interested in what I’m teaching and doing.”

Based on how well he engages his classes, the students won’t lose interest for a long time. [icon name=”stop” class=”” unprefixed_class=””]