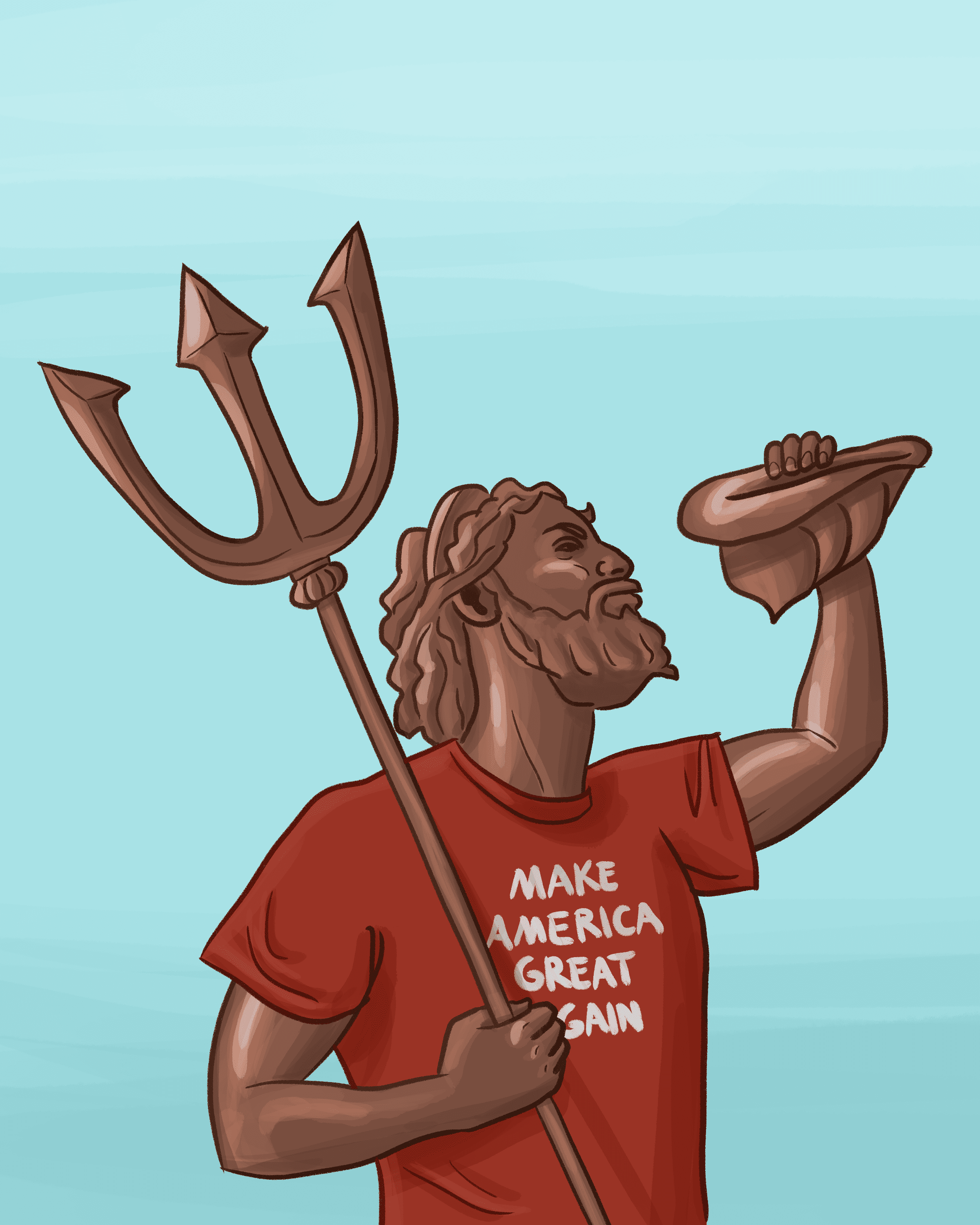 by Tia Ikemoto and Dominic Spencer

S.R., an Earl Warren College student who spoke to the UCSD Guardian under conditions of anonymity for fear of online reprisal, sits tucked into a corner of Round Table Pizza. Wearing a sweatshirt, hood over his head, he leans over the sticky table as students mingle around us with pitchers and greasy slices of pizza. Together, we are here to talk about one of the most talked-about events: the upcoming presidential election on Nov. 8. Rather than talk policy, however, we are here to ask S.R. what it is like to be a known Trump supporter on a predominantly liberal campus. He, and people like him, had a few things to say.

“When I go on Facebook, all I see is: Trump supporters are racist. They’re deplorable. They’re evil. They’re bad. They hate people of color. I’m not any of those things,” S.R. told the UCSD Guardian.

At UCSD’s College Republicans meeting last week, the club discussed plans for a formal debate to decide whether or not to officially endorse Republican nominee Donald Trump for the 2016 presidential election.

UCSD College Republicans President Quinton Grounds told the Guardian, “Trump is an incredibly controversial figure and until a statement that accurately reflects the beliefs of its members is made, the club should focus on fostering free speech and reasonable discourse.”

He commented that College Republicans at UCSD typically do not endorse a presidential candidate, yet nationally, the organization has made news. An article from the Washington Post back in August announced that, for the first time since its founding in 1888, the Harvard chapter of College Republicans would not endorse the GOP nominee. While each College Republicans club operates independently, Harvard’s chapter is the oldest in the country, and its decision not to endorse Trump foreshadowed an unconventional political season.

Ultimately, the decision to endorse or not to endorse Trump must be made by each individual chapter, a decision that College Republicans at UCSD has been cautious of making as they are hyperaware of their reputation on campus. College Republicans member and Eleanor Roosevelt College sophomore Michael Capuano further adds that “an actual endorsement would likely hurt our club’s image on campus, and that’s the unofficial reason we haven’t endorsed. No one wants to take the flak.”

Capuano, who actually plans on voting for Clinton, feels that the club has been given a negative stigma since Trump’s GOP nomination.

For many, having to be an apologist for one’s political beliefs hasn’t been worth the trouble. Many opt to keep their views private for fear of social repercussions.

S.R. has faced extreme mistreatment from peers when he expresses his support of Trump. He notes that while he doesn’t feel that it’s horrible to be a Trump supporter, he also doesn’t feel like he can walk around campus wearing Trump apparel.

“I know that there are some people who get really emotional about the election,” he explained. “I’ve been called a Nazi a few times. That’s not so cool.”

S.R. also mentioned friends of his who have been called names for supporting the GOP candidate. “I’ve had my black friend called an Uncle Tom many times,” he said. “My gay friend said it’s harder to come out as a Trump supporter than as a gay person.”

ERC senior B.S., who is a Republican but not a Trump supporter, elaborated  further on this election’s issues with identity-driven politics by telling the Guardian “the flak that I get the most is when people say, ‘You’re a minority; why are you a Republican?” B.S., who identifies as a Persian Jew and whose parents are immigrants from Iran, argues that our political views should be driven by policy beliefs rather than personal identities. “What my ethnic background is shouldn’t dictate my politics … You have to look at an individual basis and not split people up on ethnic lines.”

Back at Round Table, S.R. became visibly upset recounting some of the threats people have lobbed at him for his personal beliefs.

“I sold Trump hats on campus, so people are trying to find out where I live,” he said to explain why he chose to remain anonymous for this article. According to S.R., people on Facebook have threatened physical harm against him if they saw him selling hats on campus. He also speaks of an anti-fascism group on Facebook that posts addresses of accused fascists online.

Doxing, the publishing of one’s private information online, has become a powerful tool for shaming its victims into silence. Although it is not strictly a method of attacking Trump voters, many who we spoke to for this article mentioned having been doxed or partially doxed after expressing their support for Trump.

One such victim is Laura, a Thurgood Marshall College fifth-year whose pictures were posted online along with a video calling her a xenophobe after she was seen with friends writing “Trump 2016” on an ERC sidewalk in chalk. Although she was not connected to the chalkings that occurred the night before Triton Day, in which statements such as “Build a Wall, Deport Them All” were written outside the Raza Resource Centro, and received heavy criticism, she was verbally confronted by an ERC R.A. who was angry that they were writing pro-Trump messages on the sidewalks.

“She was just really upset and yelling,” Laura recounted. “I was like, ‘Look, we can talk about this.’ But she didn’t want to talk. It was all about ‘You’re a bad person because of this.’”

Another student posted the group’s photos on UCSD’s Free and For Sale 2.0 Facebook page with the caption, “Hey guys! Just wanted to let everyone know that I found some garbage around UCSD. Let’s keep our campus free of trash and not let this happen again!”

Laura, who voted for Barack Obama in the last election, has found it frustrating that political discussions have been unable to remain civil this election.

“You could wear pro-Trump anything and people will shout at you ‘Racist! Racist! Xenophobe!’ and they don’t even know you,” Laura said.

Despite all the tension on campus, and the fear-induced silence, Trump supporters are hopeful for a change in campus culture, one that allows for a greater respect in political discourse.

C.N., a Democrat-turned-avid-Trump supporter, told the Guardian, under condition of anonymity due to his position as a teaching assistant and researcher, that he wanted to see partisans tolerate each other’s viewpoints. Speaking to the Guardian as a breath of fresh air at the heightened tension seen this election along party lines, C.N. seemed to be a kind and understanding person.

However, while it’s important to leave room for open discussion of diverse viewpoints, most students that we spoke to did feel that politics was best left out of the classroom.

S.R. and Laura have both experienced uncomfortable lectures where professors take jabs at the GOP candidate. Whether for jokes or in seriousness, subtle references to Trump in the classroom can build up into a feedback loop in which only one side of the political spectrum’s views are being validated.

“Professors set the example of how topics will be discussed in our community,” Ground said. We look up to many of them as personal leaders, but if they voice their own opinions in a way that discourages discussion, they risk smothering that spark of independent thought.”

He stressed the need for professors to allow students to form their own opinions, whatever they may be and to foster a classroom setting that is open to new and conflicting ideas.

Fear of judgement by professors has been the grounds for which Laura chooses not to publish her last name.

“If you’re in a position where you might be a candidate for a 199 research position,” she explained. “I don’t want them to not choose me just because I’m voting for someone.”

The College Republicans have taken this campus culture to heart and instead tried to encourage students to entertain civil discussions with each other about their political beliefs. This upcoming week they are offering an open debate on whether to endorse Trump or not. Every member of the club gets a vote, but they encourage nonmembers to come and watch.

UC President Janet Napolitano is also a strong advocate for fostering free speech and debate. She recently published an op-ed in the Boston Globe, titled “It’s Time to Free Speech on Campus Again,” in which she calls for stronger tolerance of adverse opinions and beliefs.

“If it hurts, if it’s controversial, if it articulates an extreme point of view, then speech has become the new bete noire of the academy,” she wrote.

Both S.R. and Laura conceded that UCSD has operated professionally, or relatively so, in its response to the chalking and other related events, but there is still work to be done within the student body itself. Although all free speech is protected, name-calling, doxing and yelling at students for expressing their support of Trump has done a lot to make Republicans on campus feel uncomfortable for their beliefs.

Admittedly, there are lessons to be taken from this. All opinions have a right to exist on a college campus, to challenge convictions and reach new learning. It is a challenge to give one’s opponents a platform for expressing themselves, a challenge that we as critically trained students should be eager to take. At the end of the day, this country and this campus will always be comprised of people who share our views or are against them, but respecting diverse beliefs is an essential life lesson we can take out into the world after leaving UCSD.

This article was updated as of 15 October 2019 in regards to an interviewee’s names.

4 thoughts on “Trump Supporters at UCSD”