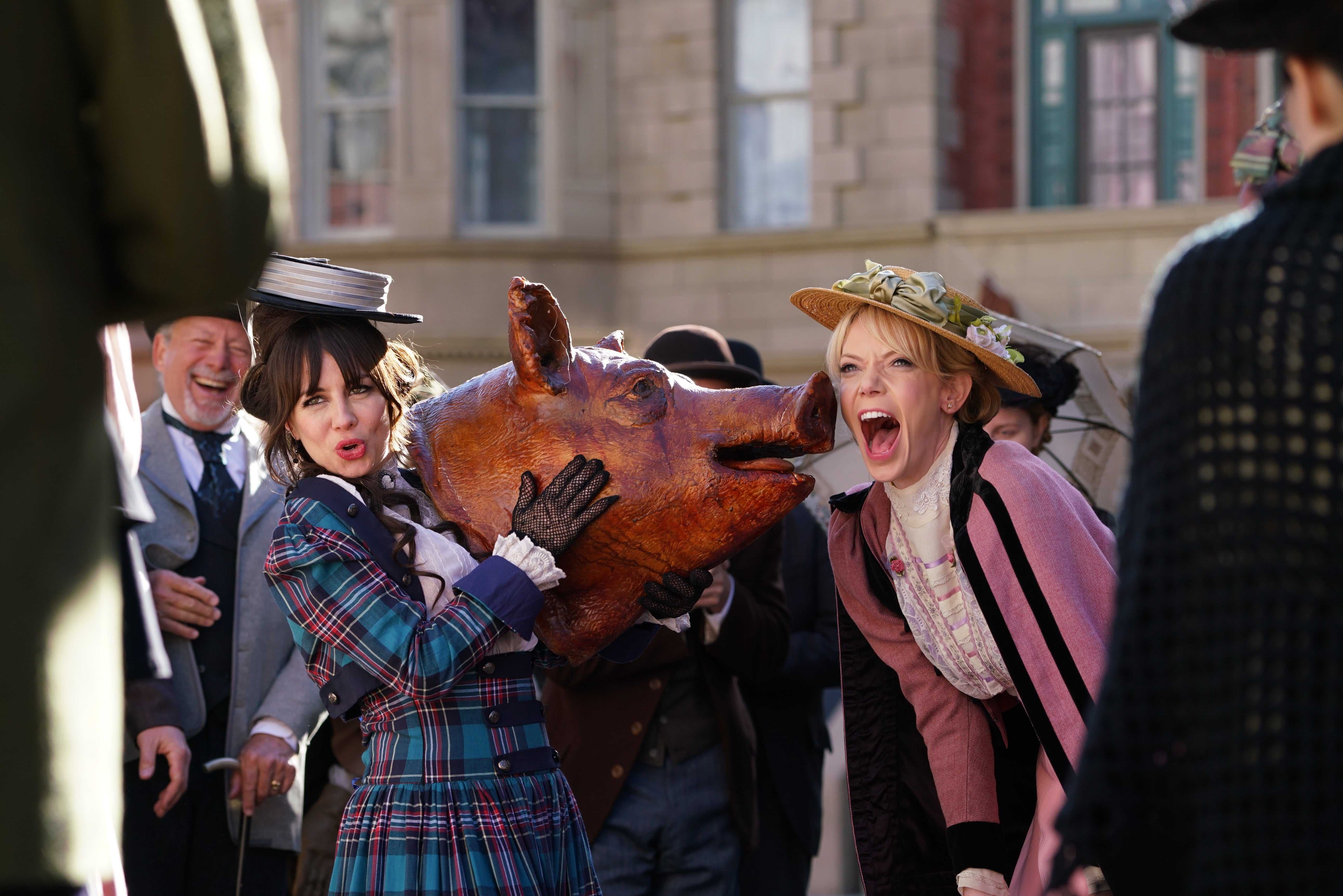 Natasha Leggero and Riki Lindhome dive right into the scummy underbelly of high society with the delightfully debauched return of “Another Period.” It’s all axes, murder and inspiredly foolish scheming from here on out, folks. If Leggero and Lindhome have taken any pearls of wisdom from the previous season, it’s that the plot was all too plausible. At this point, bald stupidity is the only way to go. Honestly? It works, and it’s damn funny, too.

The premiere introduces a vaunted historical figure, Harriet Tubman herself, and the showrunners grant the leader of the Underground Railroad no reprieve from gleefully vicious jabs. The motherly, saintly Tubman is a canny businesswoman whose first and only decree in life is to stay in the spotlight. Naturally, Lillian and Beatrice (Leggero and Lindhome) are drawn to her like flies to manure, and she offers them some free advice: branding.

Meanwhile, Commodore Bellacourt (David Koechner) welcomes a son, dubbed “Kermit the Baby,” by newest mistress, Chair. Personal rivalries and professional incompetence complicate the delivery, and the scene is an exercise in riotous escalation, as the staff fails to accommodate Chair in the slightest.

Michael Ian Black returns as the dour Peepers, with his interview-cum-interrogation of the cast’s straight-woman Flobelle (Alice Hunter) the highlight of the episode. The manor’s zany inhabitants have been sorely in need of a balancing force, and Hunter occupies the role of “sane person” with bemused solemnity.

The second episode, “Annulment” is equally depraved and delicious, as Commodore attempts to save the family fortune through marriage. Or, rather, remarriage, as he asks Lillian and Beatrice to divorce their respective spouses. Callbacks to the first season abound, and Beatrice’s husband Albert (David Wain) is haunted by memories of axes past. However, when the befuddled man explains his woes to the axe-loving Beatrice, his unfortunate coma-by-axe from the previous season is summarily dismissed as the result of living axe-lessly. You see, his injury could have been avoided if he had had a weapon.

The writing throws out pop-culture and political potshots of this ilk with every scene, and it’s a wonder when Beatrice and Albert engage in a lengthy axe-debate, blatantly parodying a certain, hmm, social conflict of today. The jokes are bawdy and brutal, but the actors carry their material with the utmost seriousness. Sure, it’s an exercise in the theater of the absurd, but one has to admire the sheer dedication to performance on their part.

“Roosevelt,” as befitting the episode’s name, introduces yet more figures of note, and the Roosevelt family proves itself to be comprised of utter boors and bastards, with a young FDR drunkenly complaining about the “cripples” and Eleanor engaging in some proper turn-of-the-century seduction. The Bellacourts, meanwhile, must deal with a budding downstairs conflict, as the servants protest their ill-treatment.

“Another Period” proves its comedy stripes largely through a ruthless devotion to complete humiliation: no one introduced is sacrosanct, not even the president. The physicality of the humor lends itself to low-down slapstick — at one point, Lillian ends up pinned under the mammoth body of William Howard Taft — but the writers don’t ask you to take it seriously. Hell, that would defeat the entire point.

As such, the show is a triumph of improbability, combining elements of reality television and the 20th-century soap with deft wittiness. The second season only continues the tradition.