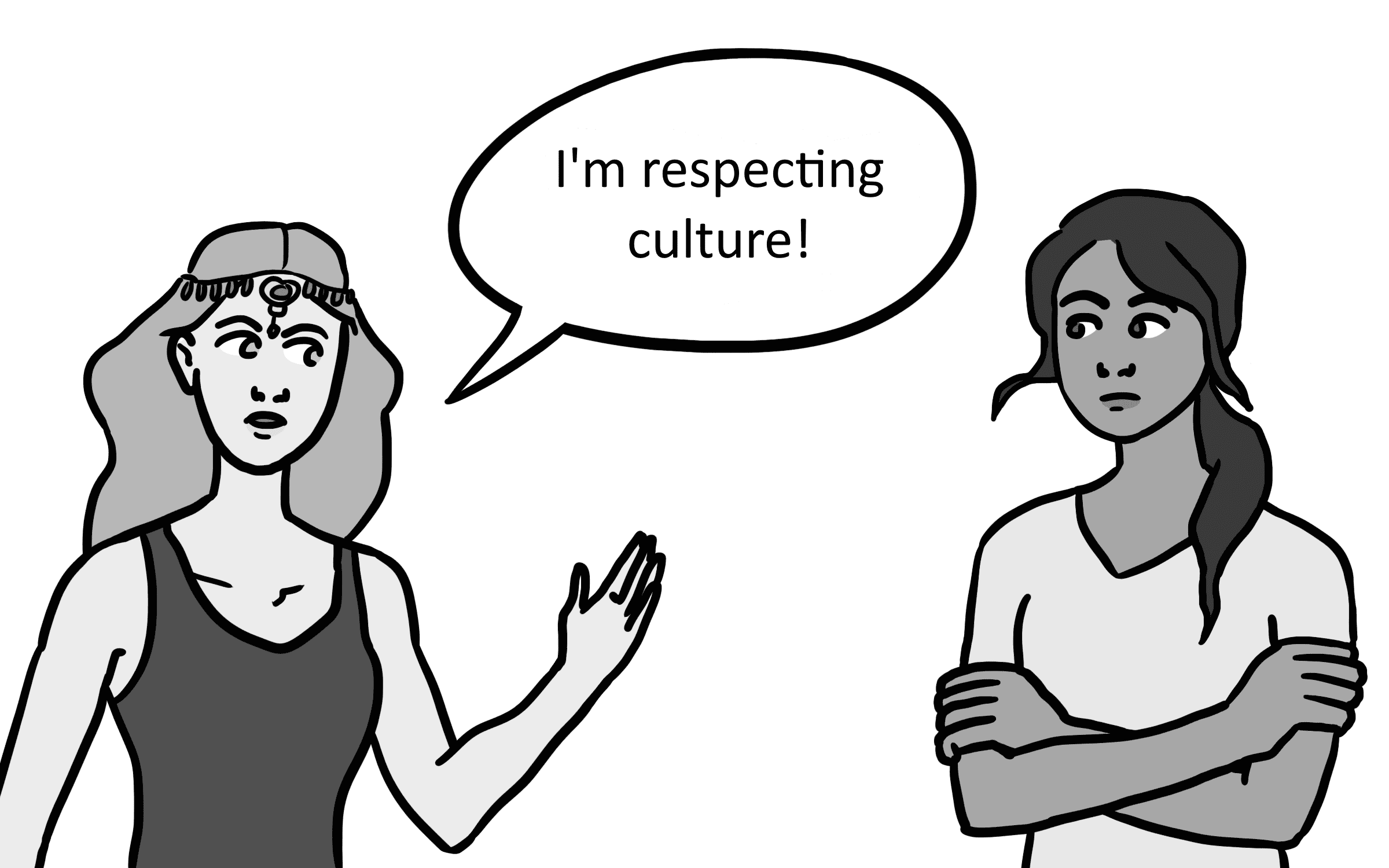 As the music festival season dawns, we see a growth in emerging artists, celebrity style icons and — what has become a frustrating trend and persistent issue in fashion — cultural appropriation. Many festival attendees sport spiritual symbols as fashion statements, contending that this adornment is simply a freedom of expression and an honoring of other cultures. Ultimately, the difference in opinion lies in the difference between cultural exchange and cultural appropriation. Cultural exchange involves a mutual understanding and respect. It does not entail selective adoption of minority cultures; a practice that only furthers Westernization and exotification of minorities. For centuries, Western culture demanded assimilation from immigrants, and that which was different was deemed inferior or foreign. Thus, to claim that wearing appropriative garb does not have negative implications is ignorant and deleterious.

The bindi, the traditional dot worn by Hindu women on the forehead, has been at the forefront of the cultural appropriation controversy. Historically, the bindi is placed between the eyebrows, an area known as the “seat of concealed wisdom.” It is said to retain energy and strengthen concentration. Many Sanskrit texts also describe the bindi as the “third eye”. Yet, there has been an evolution of this cultural symbol from spiritual to stylistic significance. As stated by Anjali Joshi of the Huffington Post, “Indians appreciated the beauty of a bindi and brought it into the world of fashion several decades ago.” Nonetheless, we see differing reactions to the adoption of the bindi in the Western world. For example, after the release of Selena Gomez’s Indian-infused “Come and Get It” music video, Hindu Statesman Rajan Zed responded with anger. “The bindi on the forehead is an ancient tradition in Hinduism…it is not meant to be thrown around loosely for seductive effects,” he states. However, Priyanka Chopra, Bollywood starlet, noted that “in today’s day and age, the bindi is not restricted to religious or traditional purposes, but is actually a very popular fashion accessory.” As an Indian-American who frequently wears crystal-encrusted, stick-on bindis, I can attest that bindis do not have the spiritual significance they once did.

This is where the bindi differs from other symbols, including Chinese characters as tattoo art and American Indian headdresses at festivals. As stated by Native Appropriations, “the image of a warbonnet…furthers the stereotype that Native peoples are one monolithic culture.” The warbonnet has deep historical and spiritual significance and has stayed that way for centuries. By dismissing the history of colonialism of the Native people, these “fashion statements” perpetuate the power hierarchy that still exists. In contrast, since the bindi itself has modernized in its use, at what point does its Westernization evolve from appropriation to exchange?

There are clear generational differences in response to this question. When I asked my parents their opinions of Westerners adopting certain Indian customs, they appreciated the mainstream acceptance of South Asian culture. To Generation X, bindis represent the cross-cultural equalization and integration they had always hoped for. At the end of the 20th century, the Indian diaspora made the Indian population one of the fastest growing ethnic groups in the United States, yet they are still just one percent of the population. Indians brought a collective pride in their traditions and made it their purpose to pass their roots to Generation Y, born in the United States. The critical difference in Indian identity between generations is in the development of our roots. Although Generation X assimilated into Western culture, they had their roots set from formative years growing up in India. On the other hand, Generation Y had the burden of development as an Indian- American with a hodgepodge of varying, and often differing, ideals. From attempting to explain our Indian art forms to staying close to our heritage while facing constant harassment for the way our food smelled to trying to find our beauty through the endless aisles of “Fair and Lovely” products, the Indian- American identity is one molded forcefully, with years of wear and tear. Thus, after having such an unsettling grounding in our Indianness, we see appropriation as a belittling of this struggle. It’s not so much the bindi itself that brings about this fury, but rather the casual adoption of certain parts of our culture while we face the ultimate struggle to love these same parts of ourselves. For our parents, Westernization signals an end to underrepresentation. For our generation, Westernization signals a growing misrepresentation.

Due to this difference in upbringing, the bindi faces more controversy than its scrutinized cousins of cultural appropriation. How we view the bindi depends on how we define our Indian identity, and for many, it is through this symbol. The simultaneous misrepresentation and underrepresentation that Indian-Americans face directly affects our personal development, and it is this environment, compared to that of our parents’, that leads to interpretation of cultural sharing as appropriation. Ultimately, to avoid any implication of appropriation, those seeking cultural exchange should focus on awareness and understanding, address heritage with interest to integrate rather than to exploit, and use cultural differences as opportunities to celebrate their beauty.

One thought on “Culture, Not Costume”