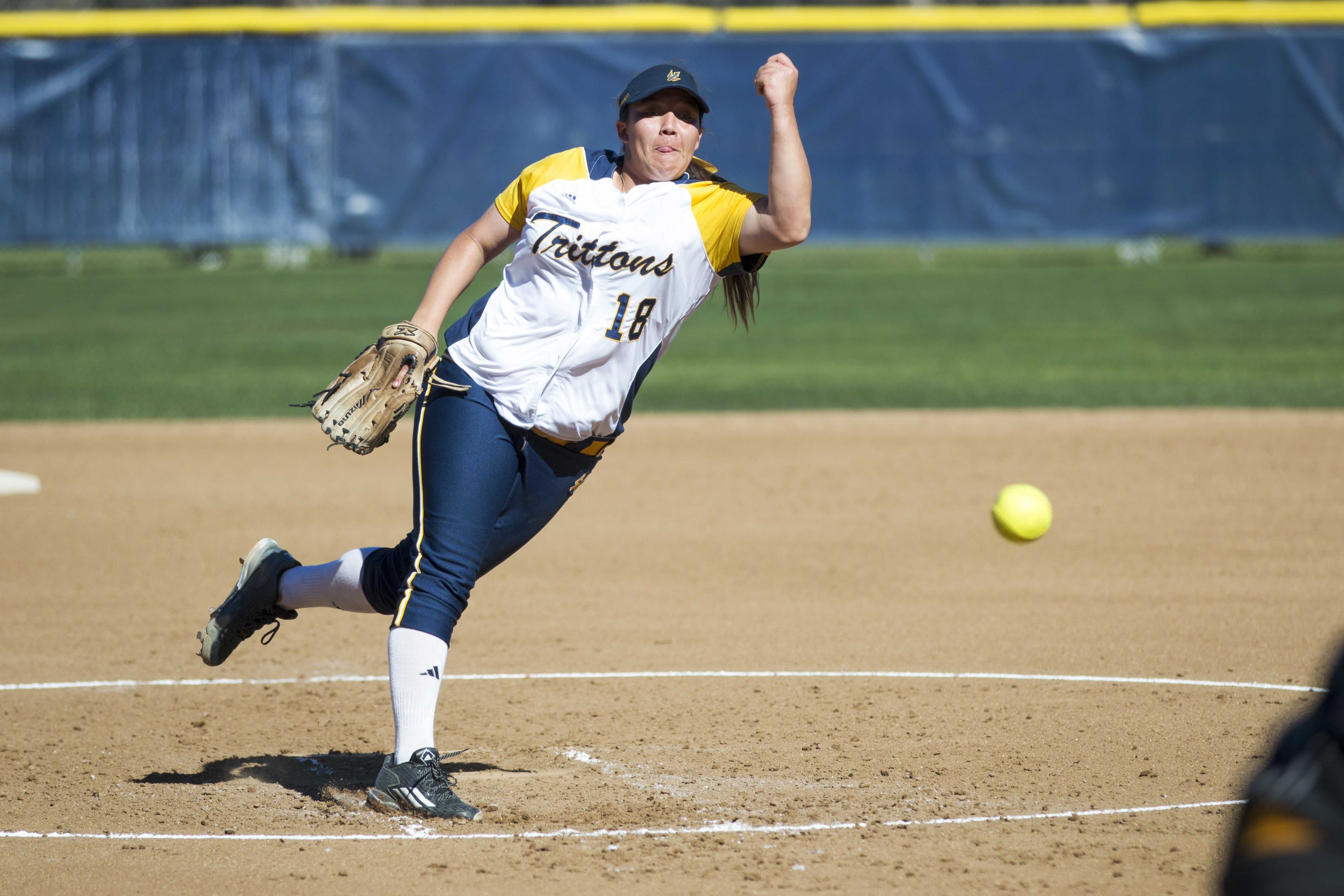 UCSD’s softball team took to the road and split a doubleheader against San Francisco State on Friday afternoon.

As part of a four-game series in the California Collegiate Athletic Association, the Tritons, now 15–11, put up a hard fight against an equally challenging Gators team, now 16–10. UCSD lost game one on a score of 2–0 but demonstrated its prowess when it rallied back in game two for a 6–5 win.

UCSD’s offense was unable to get the ball rolling in the opening series game against San Francisco State. The Tritons could not capitalize on several runners in scoring position and the Gators’ few errors.

Gators’ junior pitcher Megan Clark got the complete game shutout win. She struck out four while only allowing two hits and a walk.

The Tritons had their first opportunity to score in the third inning. With two outs, freshman utility player Darian Van Der Maaten reached base on an error and then stole second. Sophomore outfielder Kelsi Maday then walked. Together, Van Der Maaten and Maday made a double steal and put two runners on second and third in scoring position. Senior outfielder Taylor Abeyta, with a batting average of 0.296, then struck out and ended the inning.

With only two hits coming from Abeyta and Baker, UCSD ended the game with its fourth shutout of the season.

UCSD bounced back to life in the second game after being previously shut out against San Francisco State. Although the team spent most of its time catching up after the Gators started with a 4–1 lead, the Tritons’ efforts were not in vain.

UCSD came out aggressively and fired first with Maday doubling and then scoring off of sophomore catcher Lauren Sanders’ one out single.

Unfortunately, UCSD’s freshman starting pitcher Lauren Brown then gave the opposing San Francisco State an early lead. After allowing an RBI single, a three-run homer and a solo shot, Brown was replaced in the second inning by senior pitcher Hannah Duarte. By then, the Gators had a comfortable 5–1 lead.

The Tritons responded in the third inning with two runs. After Maday took first from a hit by pitch, she advanced to second from Abeyta’s sacrifice bunt. The next batter, freshman shortstop Maddy Lewis, doubled and brought home Maday. Lewis then scored off of senior shortstop McKenna Clewett’s one out single.

In the fifth inning, UCSD tied the game through aggressive hits, sacrifices and errors. Abeyta hit a single and advanced to second via Lewis’ sacrifice bunt. Sanders would then single and bring runners at the corners. Speedy sophomore outfielder Kendall Woken pinch ran for Sanders and stole second while sophomore first-basemen Sam Glantz hit a sacrifice fly and brought home Abeyta. With Clewett at bat, Woken stole third and scored home on a wild pitch. The score was now tied at five-all.

The Tritons took the lead 6–5 in the seventh inning, after Lewis singled and the Gators committed several crucial errors. Their win was solidified after the last Gators’ batter lined out to pitcher Edwards.

UCSD took game two under its control through aggressive appearances at bat and taking advantage of Gator errors. Pitchers Duarte and Edwards also demonstrated tremendous command by keeping the Gators to five runs throughout the rest of the game, getting the come-from-behind win for the Tritons.