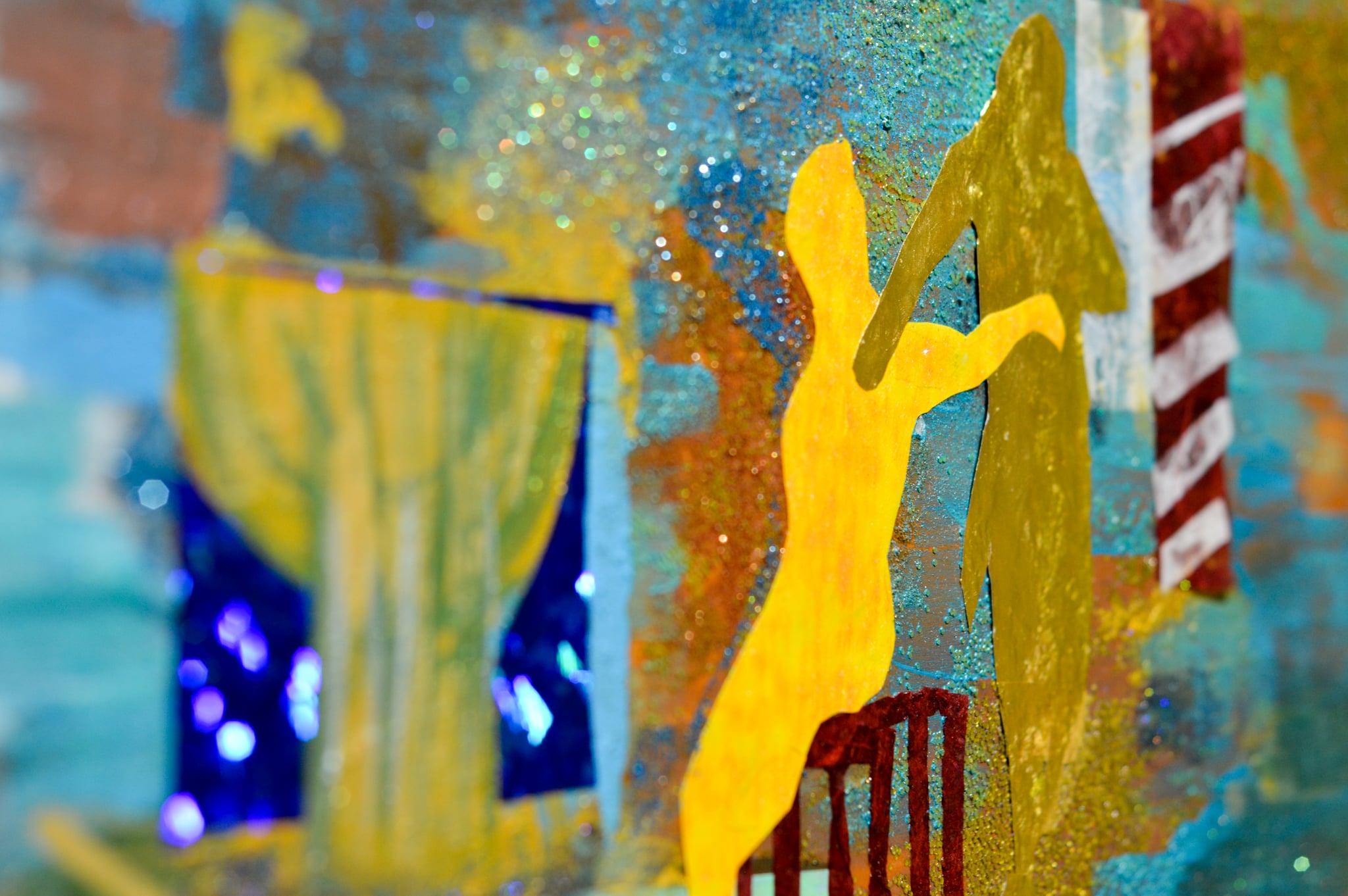 Modeled after historically significant orientalist works of art, Arpie Shekoyan’s mixed-media collages aim to comment on the impacts and effects of orientalism in modern culture by reframing famous works in new settings. By making mockups of works by Gerome, Tanous, Delacroix and other Orientalist painters, Shekoyan “deconstructs and appropriates” these works through the form of craft, giving them a handmade, more down-to-earth feel.

The Orientalist movement, a subset of the Romantic movement, typically refers to Western paintings that depict Middle Eastern, South Asian, African and East Asian cultures. Typically seen as patronizing evidence of the impacts of imperialism, writers such as Said, Hunt and Lessard have provided much critique of Orientalism and have inspired Shekoyan to do the same.

Upon entering the exhibit, one is immediately struck by a multitude of visuals: color, texture, vibrancy. As the works feature a plethora of painting techniques and a variety of crafting essentials, viewers are initially hard pressed to associate the brightly colored multimedia collages with the classic oil paintings that they imitate. The titles, however, are retained, inviting viewers to seek out the original paintings and compare Shekoyan’s work to them.

Walking in, viewers’ first impressions are of a huge collage that takes up the entire wall, the exhibit’s main piece. Entitled “La Grande Odalisque,” this painting, originally by Ingres, depicts a woman lying on a bed, showing her full back as she looks forward at the painter. In Shekoyan’s version, the woman is replaced by a large, glittering silhouette surrounded by flowing cloth elements to complete the painting. Neither Shekoyan nor Ingres highlights the woman’s face, commenting on the overall dehumanizing nature of the Orientalist movement. Instead of images of nude women, Shekoyan uses silhouettes as a way to comment on the oversexualized images Orientalism typically invokes. Other works, such as “Snake Charmer” and “Bath Scene,” also repurpose the paintings in such a way. By taking control of the images and reimagining them, Shekoyan reframes their historical context, highlighting their detrimental impact on modern culture in the shaping of societal norms.

The use of crafts is intentional. According to Shekoyan’s artist statement, craft is a “feminine-and-childhood-associated material” that she uses to “work against those notions and simplifications of private spaces.” By combining famous Orientalist paintings with new, modern art techniques, Shekoyan creates a space for viewers to reflect upon culture, society and moving art. With a refreshing take on the impact of Orientalism, Arpie Shekoyan’s “Disoriented” successfully opens up a dialogue about issues of Western domination of culture, both past and present.