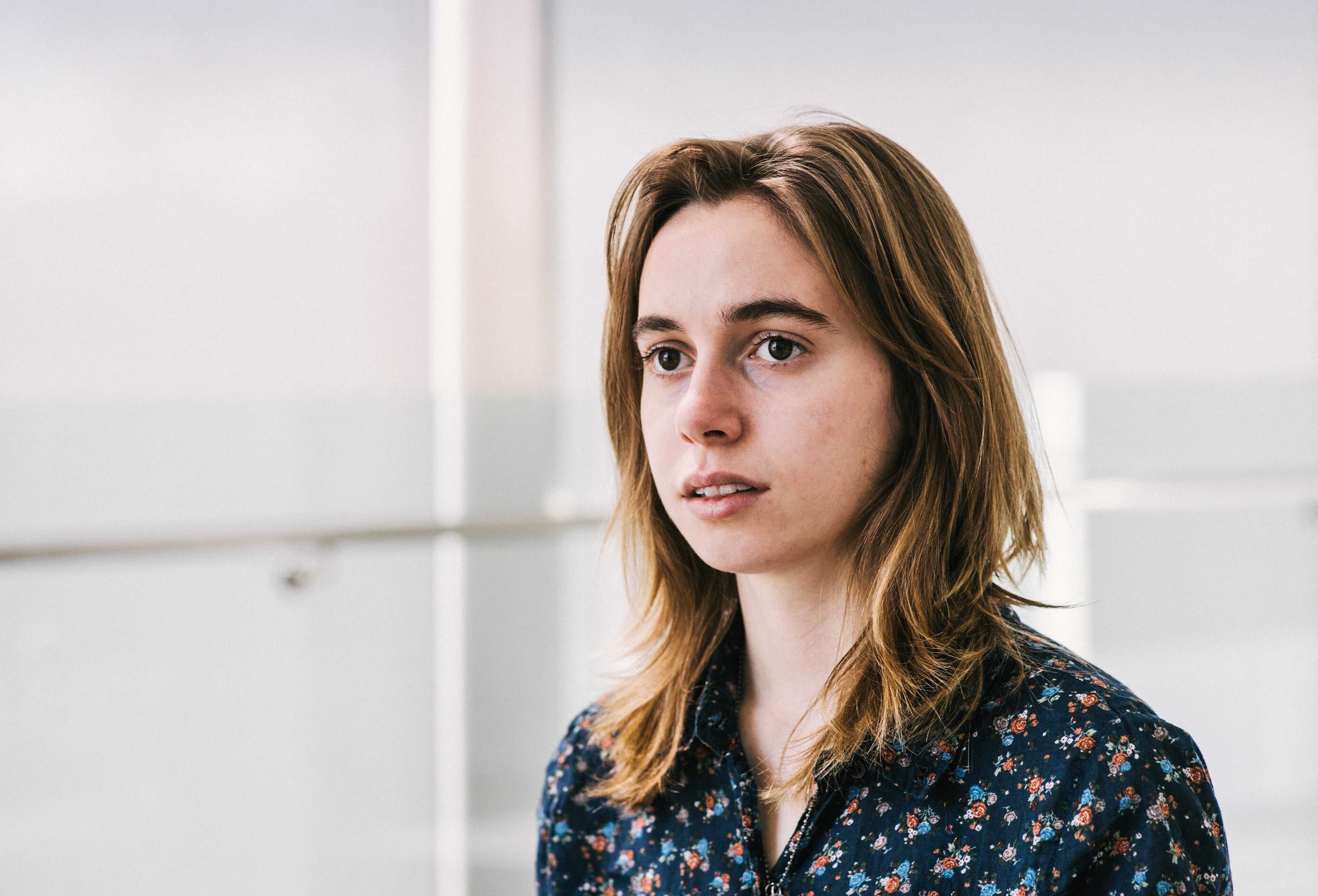 Guardian: Tell me about Memphis. What’s the music scene like there and how has it influenced you?

Julien Baker: Well the music scene is very tight-knit, but not tight-knit in a way that would communicate exclusivity. It’s familial — that’s the only way that I know how to describe it. When I was younger I would go to shows — deathcore shows and punk and hardcore — at the skate park, and through being peripheral to that scene, I started going to house shows and stuff. There’s this organization called Smith7 and they do all-ages, substance-free house shows so that kids can have a place to get plugged into the music scene. It kind of morphed into a citywide thing where all the local bands know the house show circuit and everyone puts on shows at their house and tries to work together with venues and co-ops to promote constructive comradery within the scene instead of competition. I think that was very important.

G: What are some of your influences and inspirations, old and new?

JB: Well, when I was learning to play guitar I was in fifth or sixth grade and the records I was listening to were “American Idiot” and “Take This To Your Grave” by Fall Out Boy. That was the formative alternative genre because those were the first things I was listening to that weren’t just what was on your parents’ stereo, which would’ve been Fleetwood Mac from my mom and Whitesnake from dad. I always say these guys, but it’s because, to me, their music never gets old. Aaron Weiss of Mewithoutyou is my lyrical hero as is Ben Gibbard of Death Cab for Cutie. When I was in eighth grade, I listened almost exclusively to songs with breakdowns; you know, metalcore, and then I picked up “Transatlanticism” at a record store and I thought “Oh my gosh! My life has changed!” and I dove into Death Cab for Cutie’s discography and developed a wider palette, fortunately.

G: You are still in school, how do you balance being a touring musician and college student? What is your plan for the future?

JB: I am technically still in school: I’m enrolled in online courses. On the drive here — it was a really long drive from Wisconsin to Columbus — I was just reading my textbook in the passenger seat, studying. Whenever the discussion opens, I’ll have to find some Wi-Fi and type that up and turn it in. But it’s no more challenging than last semester. I was taking on-campus courses and that was difficult because I would be travelling for shows on the weekends and so I would be on a plane trying to type a final draft of a paper. It’s really demanding but totally worth it because — as tired as it sounds — education is important and I am a nerd. I want to continue pursuing my degree, but for as long as I’m blessed enough for music to be a sustainable lifestyle. I mean, that’s what I want to do with my life, so if I have an opportunity to do it, I’ll probably take that for as long as I can. Maybe return to school whenever, if ever, it seems like a good decision.

G: What is it that you’re studying?

JB: I was an audio engineering major at first, which is why I went to Middle Tennessee State University because they have a nationally recognized audio engineering/music industry program. But I switched to literature because I just felt that it was what I wanted to do and it would be more rewarding and more aligned with the life I was trying to have when it seemed like music was always going to be a passion but I would have a day job. Recently, plan A and plan B have kind of switched. We’ll see how long that stays a thing. I hope a long time, but it won’t be the end of the world if I wind up being a high school english teacher. That’ll be pretty fun.

G: You were in school while writing and recording your album. What was it like going to classes and doing all of that?

JB: I mean, people ask me sometimes “What was it like living away from home?” and I think that shaped a lot of it. I was far from my band and I was far from all the people that I’d grown up with and known, so the writing was a lot more of an isolated process. I would go to practice rooms in the middle of the night because I shared a dorm with a complete stranger, so I couldn’t really write comfortably there. But it wasn’t that difficult balancing courses. I never imagined having the luxury to devote 100 percent of your time to writing and having art be your sole pursuit, so it just made sense to do it in kind of a hobby capacity. I just had to make it work. It meant a lot of not sleeping, but I suppose when you’re dedicated to an art form you forgo things like sleeping and eating in order to accomplish that creative pursuit.

G: You’ve been written about in New York Times, Stereogum, Rolling Stone and Pitchfork. Could you describe how it feels getting all this attention and seeing how well your album is being received?

JB: It’s incredibly surreal and actually kind of terrifying sometimes. I want to give a disclaimer and say that when I say I prefer the anonymity of previous tours that were in basements and houses, that’s not to say that now I have this idea of myself as an incredibly prolific and influential musician, and everyone knows who I am. I know I’m still very, very low, but even whatever modicum of recognition I’ve received thus far, it continues to blow my mind. When Sean from 6131 Records said “Oh, NPR wants to do the single,” I just said, “I don’t believe you, I don’t believe that that is true,” because those kind of things don’t happen in real life. For some crazy reason they did and I am thankful everyday for that, but I try to keep it at arm’s length, you know? I never want to know numbers or anything — quantitative data like plays or likes or views — because I feel like that would poison my soul a little bit. I hold on to qualitative validation like getting to play with The National! Those people are my heroes and that was a dream come true. That’s a memory that, whatever success or failure comes in the future, I will never lose. So I have that, but I don’t want to get hung up on how many Spotify plays something has. I try not to read too many reviews or things, or put my identity or stock in that just for health and keeping a grounded, appreciative view of things.

G: You made a playlist for your east coast tour that includes the likes of Eskimeaux, Mitski and Adult Mom. Are there any other albums/musicians you’ve been listening to lately?

JB: Well let’s see, we’ve been jamming the TORRES record in the car so much. And the new Daughter record of course, which is perfect! I thought they couldn’t get any better, and then they went and got better! Like I have to hold it back because I’ll fangirl over them. And then we were listening to “Ivy Tripp” too, and also Noah Gundersen’s newest record that he released. Oh man, it’s so great!

G: You are playing San Diego next month, how would you describe your live show?

JB: I have this fear that my live set might just induce people to throwing themselves out of the nearest open window — it’s like intervals of three-minute long sadness punctuated by a horrible dad joke. I get really socially anxious really easily. I used to deal with that by being introverted and closed off, which was a lot easier to do in a live band setting because you’ve got two stereo fenders and there’s a whole wall of sound. It’s grunge and rock-n-roll; you can just scream and it goes away. But when it’s just me standing up there… if I were to behave that way, no one would know that it’s just because I’m really nervous. Everyone would think that I am some kind of… I don’t know… that I was being pretentious or alienating or a brooding musician and so I try to be as chatty as possible, just interact with the crowd and be like “Hi, what’s up? I’m gonna make some horrible jokes and say really dumb things so that maybe we can balance out the feelings, the vibes that work in this room so no one will burst into sobs.”

G: You are playing The Irenic, which is a functioning church. Was that on purpose, seeing as you are very open about your faith?

JB: It wasn’t on purpose, but I do enjoy getting to play in church venues. There’s this interesting relationship with how I view church venues. First of all, just from a tech-y perspective, the acoustics are always great. But also, there was a church in Memphis that had a basement that would put on hardcore shows all the time. It was cool and so I love churches. I don’t feel strange doing secular music inside of a church. And I know that’s jarring to some people but because of that venue in Memphis, it’s not to me.