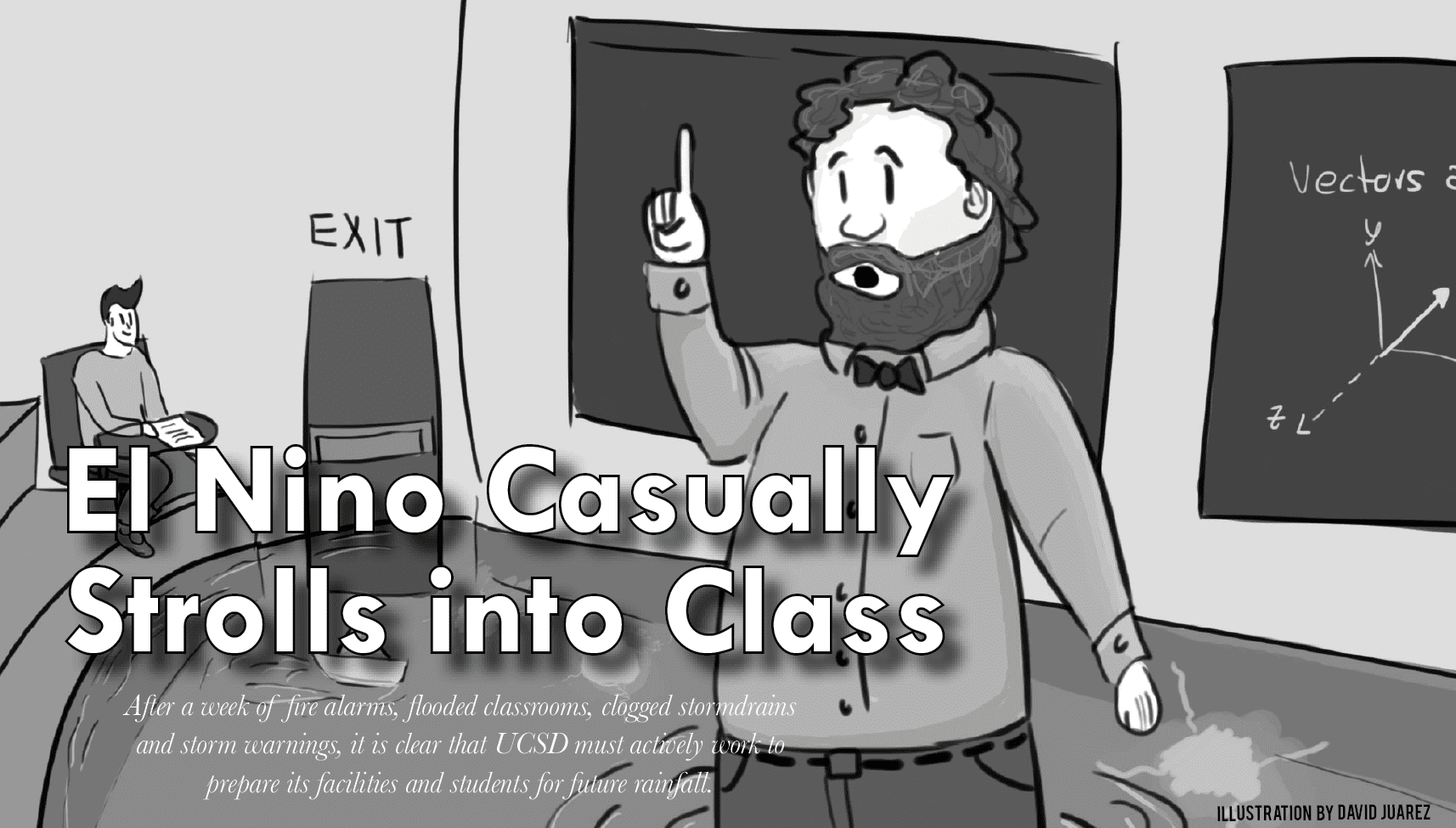 Last week’s storm left many out in the cold — literally. Despite news of the impending storm and continued hopes for an El Nino season to quench the drought, the UCSD administration left us unprepared. Lecture halls flooded up to four inches, according to NBC7, leading to the now viral image of Professor Kenny Barrese teaching vector calculus while standing in a puddle of water. Many saw this as an example of dedication, but the underlying issue is that UCSD facilities lack necessary safety measures for the upcoming storms. Even the Bookstore ran out of umbrellas, forcing people to use UCSD Guardian newspapers as flimsy rain covers. The apocalypse, the El Nino of the century, is here to drown us all.

Five years in a drought and nine since a strong El Nino season and we’ve forgotten what it means. The term El Nino does not refer to a storm but rather a warming trend in the equatorial part of the Pacific Ocean. This generally causes increased precipitation in the South West, particularly California, and this warming is followed by a cooling trend called La Nina which forms a cyclic pattern of temperature change. El Nino weather patterns are slated to last through the winter months.

A severe El Nino event in 1983 caused $1.8 billion in damage across the state. Previous events in 1983 and 1997 had an average of two degrees of warming above average but some projections set this year at three degrees above the observed normal. Although there is debate over the magnitude this El Nino season, it is clear that we are gearing up for a wet one. The Climate Prediction Center released a report in November calling this El Nino event “strong” and “mature” — like an older sibling who occasionally dunks you in the pool.

With that knowledge, the Guardian Editorial Board implores the university to begin extensive preparation. Last week we had a taste of water for parched lips, but flooding in classrooms and parking lots loses novelty when car engines are ruined and lecture halls have lasting water damage. Next it might be flooding in dorms or on-campus apartments, many of which in Warren College and Sixth College lie in depressions or lower areas with little drainage. Just because we aren’t used to severe rain doesn’t mean that we should rely on Noah to build an ark for our school. This doesn’t happen to other schools in areas that get 10 times the amount of rain, such as in areas of Washington that get 100 inches of rain a year.

Our drainage systems, which worked for 2014 when we had 5.06 inches of rain (49 percent of the average), won’t hold up for this year when we could number far above average. In 1997 in the Los Angeles area, seasonal rainfall was 110 percent above normal.

To begin, the university should water-proof and seal doors where possible. As for the underground levels of parking lots, there needs to be efficient draining systems to reduce the accumulation of water.

Outside, in the various banks of dirt and eucalyptus trees, sandbags or more permanent solutions should be installed to funnel water to appropriate drainage areas. That way we can establish channels of water away from walking areas or rooms.

As for our warning systems, the Triton Alert works well to warn students of hazards. However the constant blaring of the fire alarm after the tornado warning last week is not acceptable. We should be able to handle possible situations with calm preparedness, not the haphazard panic that exhibited itself across campus last week.

The Editorial Board urges the university to address campus emergency preparedness by educating students with a routine protocol, which allows them to calmly and safely respond to severe storms. Instead of remaining silent, the Department of Campus Emergencies and Safety should take this time to teach students proper disaster protocol while encouraging individual preparedness.

While the department’s website is exhaustive, few students or faculty know about emergency procedures. The site includes information on possible tornados and earthquakes, but lacks information about flash floods or mudslides or information about where they could occur on campus. Flash floods can occur almost anywhere after a few days of consecutive rain.

Students should also be prepared with general essentials, like shoes that aren’t flip flops and maybe an umbrella if they want to be dry. Despite the fact that San Diego normally doesn’t have water, the sheer lack of preparation on this campus is astounding.

Luckily, there has not been any major flooding so far and even a monstrous El Nino rainstorm doesn’t signal the end of the world, but it’s likely to be a wet, stormy quarter. Better buy an umbrella and boots.