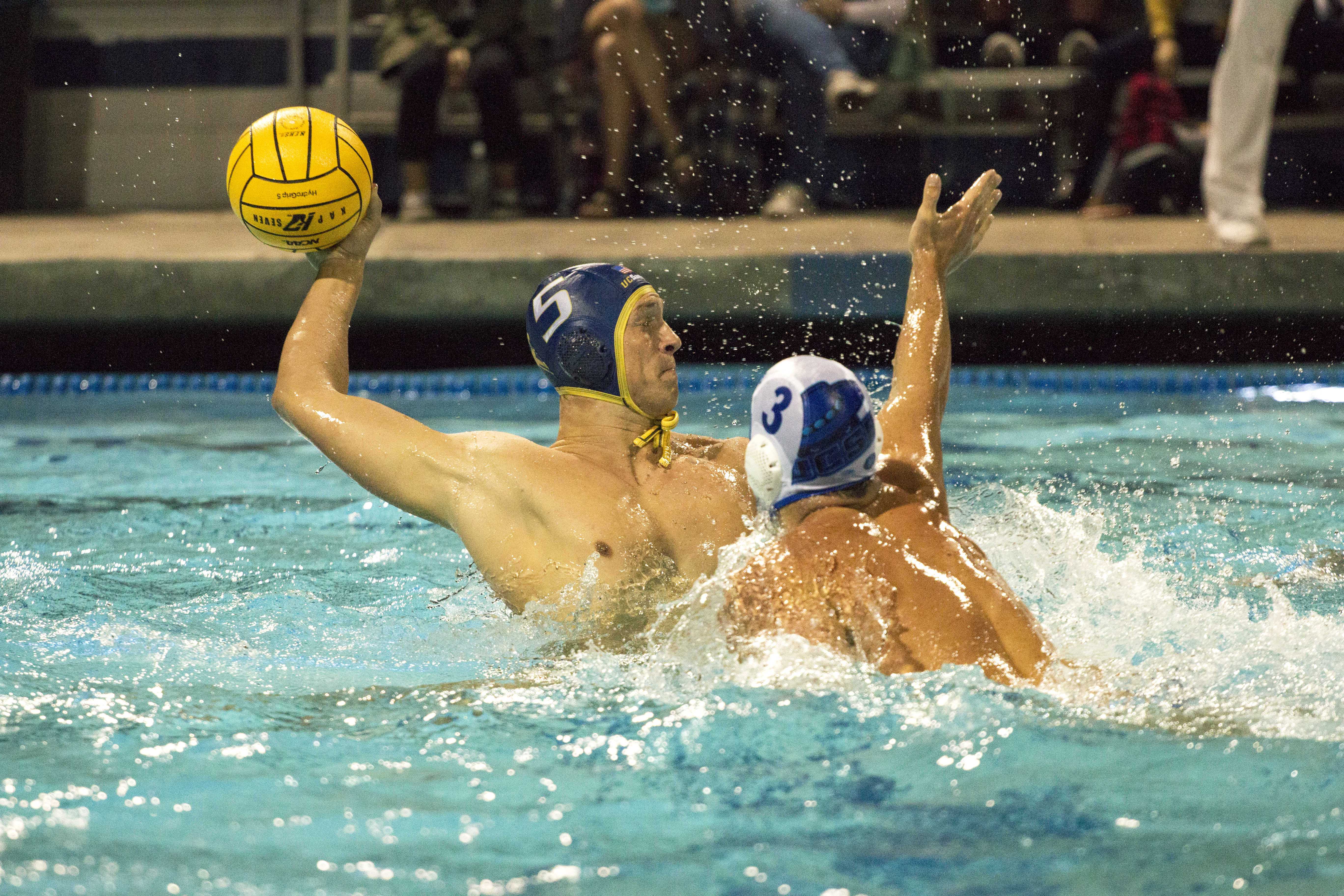 The UCSD men’s water polo team ended a successful bid for its third-straight Western Water Polo Association crown at Cadet Natatorium at the U.S. Air Force Academy in Colorado Springs this past weekend, securing three straight wins en route to its 18th WWPA title. The Tritons edged out the Santa Clara University Broncos 11–9 in the opening round on Friday, then went on to take a 10–8 victory over host Air Force on Saturday to clinch a spot in the title match. After a tight four frames against top-seeded UC Davis, UCSD came away with a narrow 6–5 victory to its crown.

UCSD made a comeback from a two-goal deficit in the second half to secure the win against Santa Clara and move on to the WWPA semifinal round.

Freshman driver Cole Martinez and junior utility Nassim Hmeidan each scored one in the first minute of the first frame to take a commanding two-goal lead over the Broncos. However, Santa Clara responded with two goals of its own to tie the score up at 2–2; each team then took one more to end the quarter in a 3–3 deadlock.

The Tritons then outscored the Broncos 3–2 in the second frame to establish the lead once again. The Triton defense held strong and limited the Broncos to just two scores as junior utility Jack Ellinthorpe, junior driver Andy Moore and Martinez each put away one to put UCSD at a one-point advantage going into halftime.

However, the Broncos came back after the half and found the back of the cage three consecutive times to set the score at 8–6, claiming their first major lead of the game. UCSD’s senior utility Daniel Straub was able to cut the deficit to one, and junior driver Nick Alexander converted a five-meter penalty shot to tie the game up once again.

The critical point came as two Broncos drew exclusions late in the quarter, putting the Tritons at a two-player advantage. Ellinthorpe scored a six-on-four goal to steal the lead back, then senior utility Chase Cockerill lobbed one more into the back of the cage with six seconds remaining to put UCSD back at a two-point advantage.

The Tritons scored one more and limited Santa Clara to one in the final frame to end the game with an 11–9 victory and move into the semifinals against tournament host Air Force. UCSD increased its record to 12–13 this season, while Santa Clara dropped to 11–20 overall.

“Any time you’re going to try to beat a team a fourth time in one season, it’s pretty difficult,” UCSD Head Coach Denny Harper told the UCSD Athletics Department. “I’m certainly pleased with the way we closed it out. I do think that playing this game is going to pay dividends in terms of getting into a groove of what to expect playing in this altitude of 7,200 feet.”

The Tritons put away two last-minute goals to crush tournament host Air Force 10–8 on Saturday and secure a spot in the WWPA championship match.

Alexander found the back of the cage in the first frame to push the Tritons to an early lead. However, the Falcons battled back in the second, scoring twice within minutes of the start of the period to take a one-point lead. Martinez responded soon after with a goal of his own to level the score; Alexander then nabbed his second of the match to reclaim the lead.

The Falcons were not done yet though — three scores in quick succession put Air Force at a two-goal advantage coming into the last minutes of the quarter. Martinez scored again off a pass from senior utility Chase Cockerill to narrow the deficit to one, but the host closed the quarter at a 6–4 advantage after putting away one last shot in the final 39 seconds of play.

The Tritons returned with a vengeance after the half, outscoring Air Force 3–1 to even the score once again. Cockerill scored one and senior two-meter Tyler Mancuso took two to claim a narrow one-point lead, but it didn’t last for long — a power play by Air Force’s freshman utility George Millard in the final four seconds of the frame leveled the score back out at 7–7 going into the fourth.

Mancuso opened the fourth quarter up with a score from the post position to reclaim the lead. The Falcons briefly tied the game at eights, but Cockerill smashed two into the cage to re-establish the advantage. The Tritons held strong on defense for the remainder of the quarter to secure a 10–8 victory and a spot in the championship matchup the following day against top-seeded No. 9 UC Davis. With the win, their record improved to 13–13. The Falcons dropped down to 11–16.

The Tritons stole a huge upset win over top-seeded No. 9 UC Davis on Sunday to secure yet another conference crown.

Alexander scored on a power play once in the first 47 seconds of the first frame and again in the last 11 seconds to steal an early 2–0 lead over UC Davis. The Tritons held the Aggies scoreless until the first minute of the second quarter, when junior two-meter Jacob Ley smashed one into the back of the cage within 50 seconds of the start of the quarter to narrow the margin to one.

The Aggies would strike again with two minutes left in the quarter to tie the game at twos. Cockerill then looked to take back the lead, hitting the target to push his team to a one-point advantage in the last 12 seconds of the frame. However, freshman attacker Ido Goldschmidt came back and fired a hard shot into the goal with a mere two seconds left to end the half at a 3–3 deadlock.

Alexander completed his hat trick in the third as he converted a five-meter penalty shot to take back the lead for his team. Mancuso then scored a critical insurance point for UCSD, boosting their lead back up to two just past the four-minute mark. UC Davis freshman utility Sasa Antunovic fired a shot home on a power play to put the pressure on the Tritons once more, but just minutes later was removed on an exclusion, giving Alexander yet another chance to convert a penalty shot and set the score at 6–4.

The fourth frame became a nail-biter after the Aggies’ redshirt freshman Brock Gordon scored in the first minute and a half to narrow his team’s deficit to one. However, goalkeeper Jack Turner held firm in the Triton cage, making two critical saves in the last minutes of play to hang onto the lead and secure a narrow 6–5 upset.