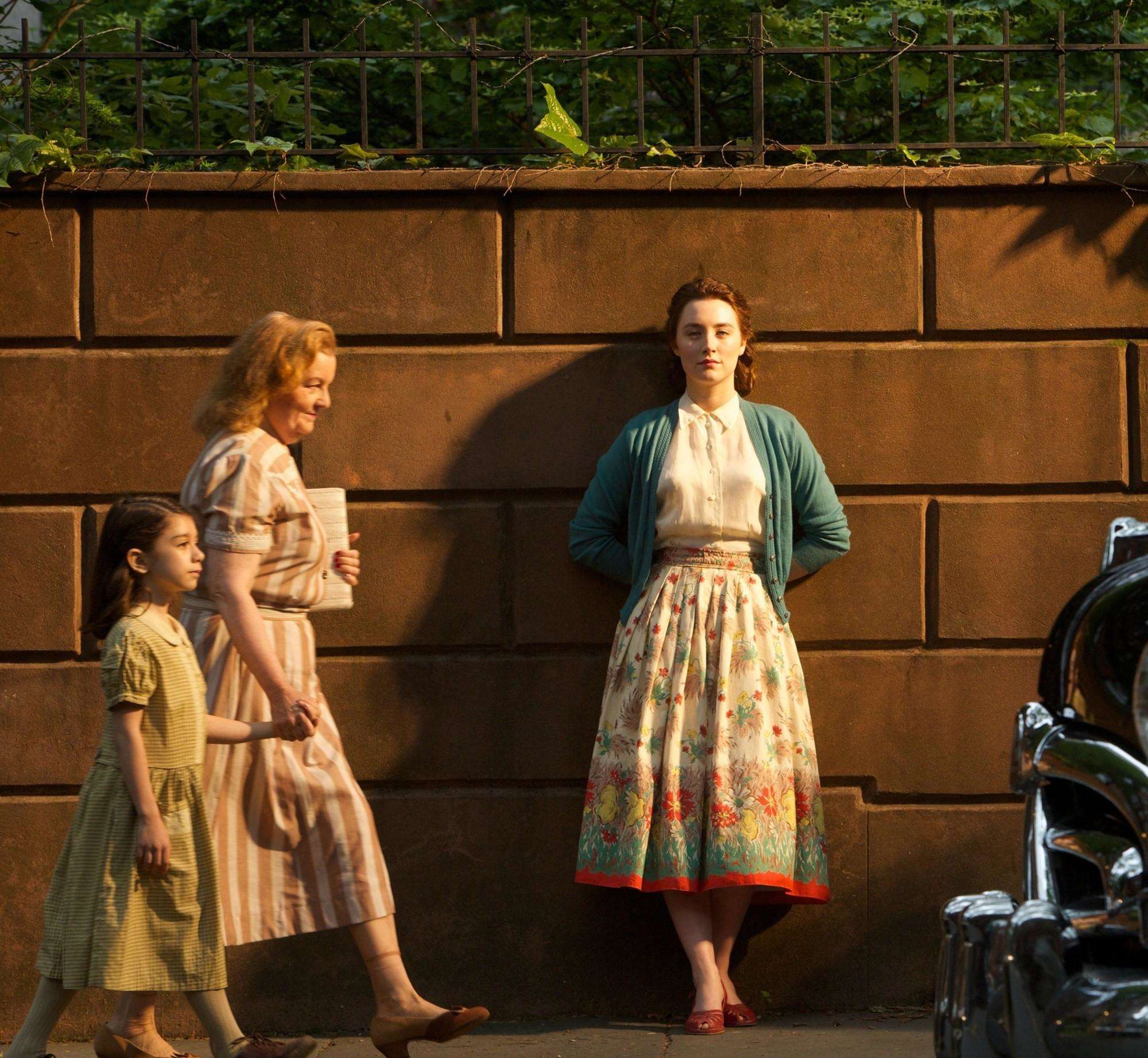 “Hope has two beautiful daughters; their names are Anger and Courage. Anger at the way things are, and Courage to see that they do not remain as they are.”

From young-adult novel adaptations to science fiction thrillers to Wes Anderson funhouses, Saoirse Ronan has refused to box herself in as an actress.

Her latest film “Brooklyn,” however, has her returning to a genre in which she first gained notoriety as a rising-child actress — period dramas. In both features, Saoirse portrays characters limited by their youth and environment. But this time, innocence, which underlaid the entirety of her performance in “Atonement,” served merely as a starting point.

Eilis, her character in “Brooklyn,” is stuck in innocence, working part-time at a small-town bakery in 1950s Ireland under a wicked and embittered boss. That is, until her sister arranges to send her on a frighteningly permanent-but-hopeful trip to America — specifically Brooklyn. Simultaneously, in her own life, Saoirse experienced similarly daunting circumstances as she left London, her home at the time, to live in New York City.

“Every kind of stage that we see Eilis reaching and overcoming, I was going through myself,” Ronan told the UCSD Guardian. “There was sort of nowhere to hide, but by the same token, once you actually get through something like that there’s nothing more gratifying.”

Gratifying, it indeed was for Eilis as she grows confident in her strange and boisterous surroundings. She goes out at night to Irish dances, falls in love with an Italian sweetheart and even learns how to eat spaghetti correctly. Her character’s willingness to engage in acts beyond what she’s used to reflects Saoirse’s own courage to take on a role embedded with a maturity beyond what she herself is used to.

“It was like a bloody guardian angel or something coming down and kind of going, ‘Okay, you’re ready now,’” Ronan said. “I was very much ready to take that step.”

Eilis’ development halted, however, when a personal tragedy forced her to return to Ireland. Though she intended for the trip to be temporary, versions of everything she valued in America appear in her hometown — a job, a man and a future. In spite of this, Eilis realized that all of these things, though attractive, are being forced upon her as if she were a child.

“Even though she has evolved into the young woman who has her own life and her own job … nobody knows that at home and decisions are slowly starting to be made for her again,” Ronan said.

But fortunately, Eilis is no longer a girl from a small Irish town. She’s now a Brooklyn woman, and she unleashes this side of her in a final confrontation with an all-too familiar face — the mean, old bakery lady.

“She had to rise up and she had to stand up to this woman who had kicked her down for so long and profess who she was and the life that she had chosen,” Ronan said. “It’s really at that moment that she realizes that this can’t last forever, and she needs to go back to the life … she had chosen before she left.”

And just as Eilis returned to her newfound roots in America, so did Saoirse to her native realm of drama. Her courage has paid off as she no longer carries the burden of proving that she can match whatever genre of script is given to her. Instead, Saoirse has earned the freedom, without risk of confinement, to do what she does best: act.

Carey Mulligan’s Maud — a working-class mother turned suffragette — is a portrait of revolution. She is neither innately radical nor militant, and the initial scenes of “Suffragette” reveal a tired laundress skeptical of disruptions to the 20th-century English ideals of domesticity and social hierarchy. Surely this Maud is a far cry from the woman we see talking back — albeit eloquently — to police and proudly burning down houses in later episodes.

“[Maud] starts the film as such an ordinary woman,” Mulligan told the UCSD Guardian. “And it’s through this journey, through meeting these women that she becomes extraordinary … it’s a really big shift that she makes in a lot of her personality.”

Maud’s initial fascination with the movement comes as she witnesses several suffragettes throwing bricks through storefront windows. And when she hurries home to the open arms of her husband and son, we see just how much she has both to lose and to gain from joining the suffragettes’ campaign.

Her domesticity, though confining, comprises the entirety of her life, and to renounce her family is a tremendous sacrifice.

Yet nestled in this household, alongside the warmth of familiar arms, lies an overwhelming cloud of oppression. Maud is allowed to remain a part of this household only if she retains its identity. To gain an identity of her own, she must look to an alternative form of support: a group of rebellious women both unsatisfied and courageous enough to pursue a freedom that may take years to acquire.

“At that time, to make that choice to be a suffragette was incredibly dangerous and risky and could ruin you,” Mulligan said. “And they stood behind it and endured everything that you see in the film … not for themselves but … [for] the future generations. And I think that kind of conviction for their beliefs and doing things for the betterment of society … was completely, in a way, really unselfish … because the change that would be affected wasn’t really going to affect their lives.”

It was this unity among women that gave Maud the strength to make sacrifices in exchange for her own voice.

“It was interesting because it was the first time in history in England that the classes … really mixed,” Mulligan said. “That was a big part of the movement.”

Maud’s struggle to find her own voice is one common to each woman in the campaign.

“She was based on a lot of real women,” Mulligan said. “There was especially … one girl who I really focused in on who was a suffragette who … essentially started off life very poor and married very young. And had a lot of similar background to Maud. And then she came across the suffragettes, and they sparked something in her. And she just took on this completely different life.”

But Maud’s character resonates with more women than the distant, bonnet-clad suffragettes of the past.

“I think there are lots of things that make it relevant today,” Mulligan said. “We never wanted this to feel like a sort of old costume drama; we always wanted it to feel very present.”

And surely Mulligan’s portrayal of Maud — a woman frustrated by societal confinement but brave enough to instigate change — is one that can certainly still be felt.

One thought on “Daughters of Cinema”