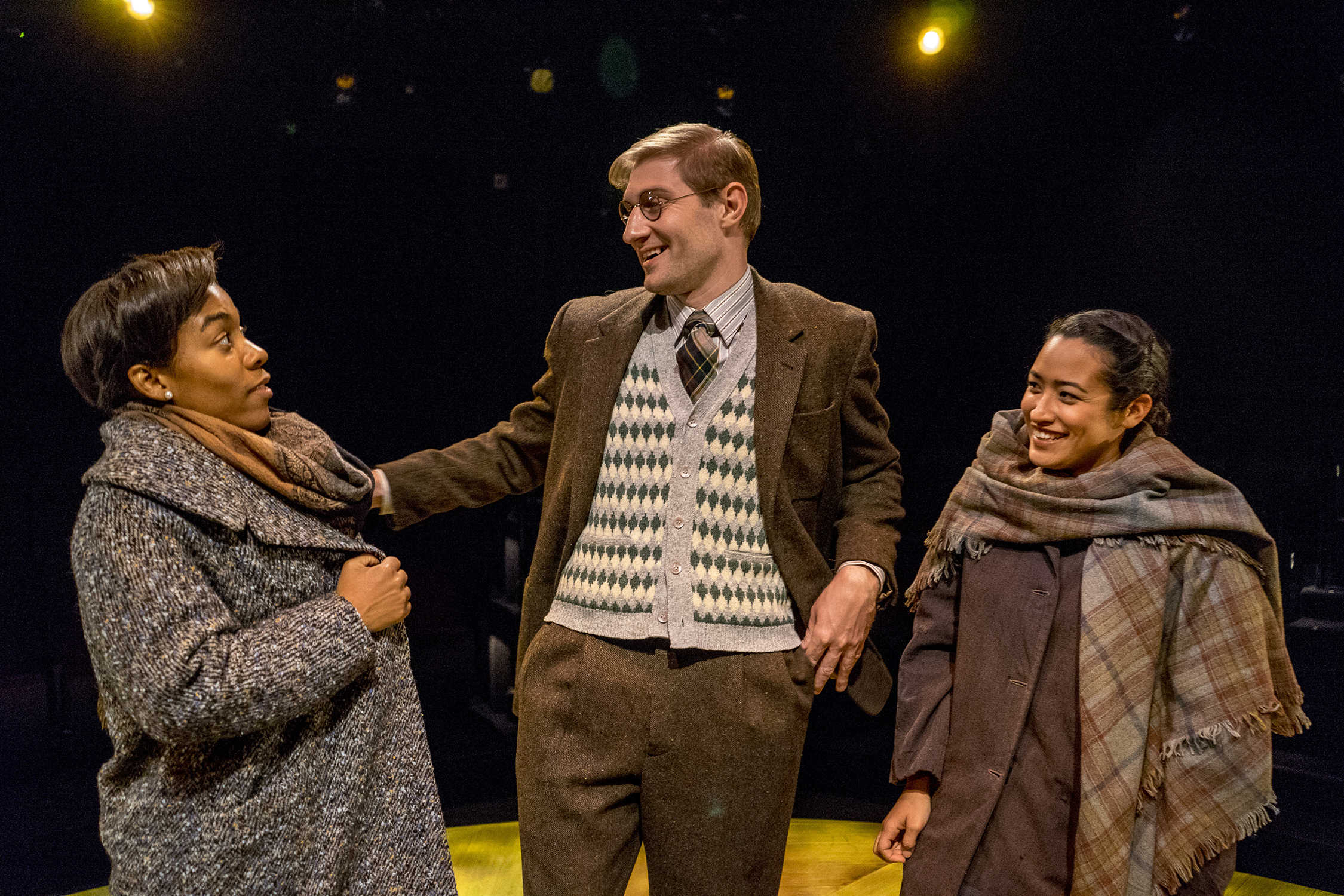 At the Old Globe, USD Theater M.F.A. Program graduate students shine in a 1950s styled “As You Like It.”

In the intimate Sheryl & Harvey White Theatre, you will fall in love with “As You Like It,” just as the characters of the play fall madly and suddenly in love. Directed by Justin Waldman, the play represents a partnership between University of San Diego’s Theatre M.F.A. program and The Old Globe.

“As You Like It,” the Bard’s most beloved comedy, tells of the banishment, romance and return of Rosalind (Ally Carey), Celia (Makha Mthembu) and Orlando (Daniel Petzold). After Rosalind’s father, Duke Senior (Nathan Whitmer), is usurped and banished to the mysterious Forest of Arden, she and her faithful cousin Celia are forced to leave the court of the newly crowned Duke Frederick (Lorenzo Landini). They escape to the Forest of Arden with Rosalind posing as a young lad, Ganymede, and meet the lovesick Orlando, also banished. Rosalind, now dressed as Ganymede, promises to cure Orlando of his love for Rosalind by pretending to be her. Homoerotic subtext, wit, wordplay and drama flow freely.

This hilarity of the mistaken identity is undercut by the ever-melancholy Jaques (Amy Blackman), who performs some of the Bard’s most famous monologues and arguably some of the most cunning lines of the play. Famous for his unexplainable sullenness, Jaques exhibits quiet sadness, undercutting his biting wit, which is more cynical than petulant. This depth is best seen in her scenes with the wounded deer which weave hauntingly through the play. When the deer is finally killed, her sadness isn’t overdone, instead burning through her lines and cynical humor. Blackman plays Jaques like the character is supposed to played, with subtlety and an understanding of the woes of the world.

Another standout character is the loving Celia. The most beautiful aspect of Celia is her ability to love, and Mthembu gives the role her heart as well as her quick tongue.

The banter between Rosalind and Celia is easily the fastest and funniest of the show. The two cousins are matched in acumen only by Orlando and Jaques. However, the funniest lines of the show are awarded to Touchstone (Ajinkya Desai), the exiled court jester or fool. Desai, another reason to see the production, is a UCSD alumna who majored in engineering and plays Touchstone with exaggeration and exuberance.

Each of the characters stands out in his or her own way, which they must in the small theater-in-the-round. A ladder, two boxes and the occasional rope or set of papers serve as the only props of the play. However, the excellent acting and choreography make the props appear to be much more; the ladder becomes a tree, table or wall based on the character’s need. Adding to an already beautiful rendition of this comedic classic, all the characters are dressed in 1950s apparel from floral dresses to knit cardigans. Each look is tailored to the character’s social standing and attitude; the exiled members of the court wear patchy tweeds while Touchstone wears a set of pastel shirts reminiscent of the motley costume of jesters.

Whether you are a lover of Shakespeare or just along for the ride, the USD M.F.A. Program’s Production of “As You Like It” isn’t just likeable and fun — it’s lovable.