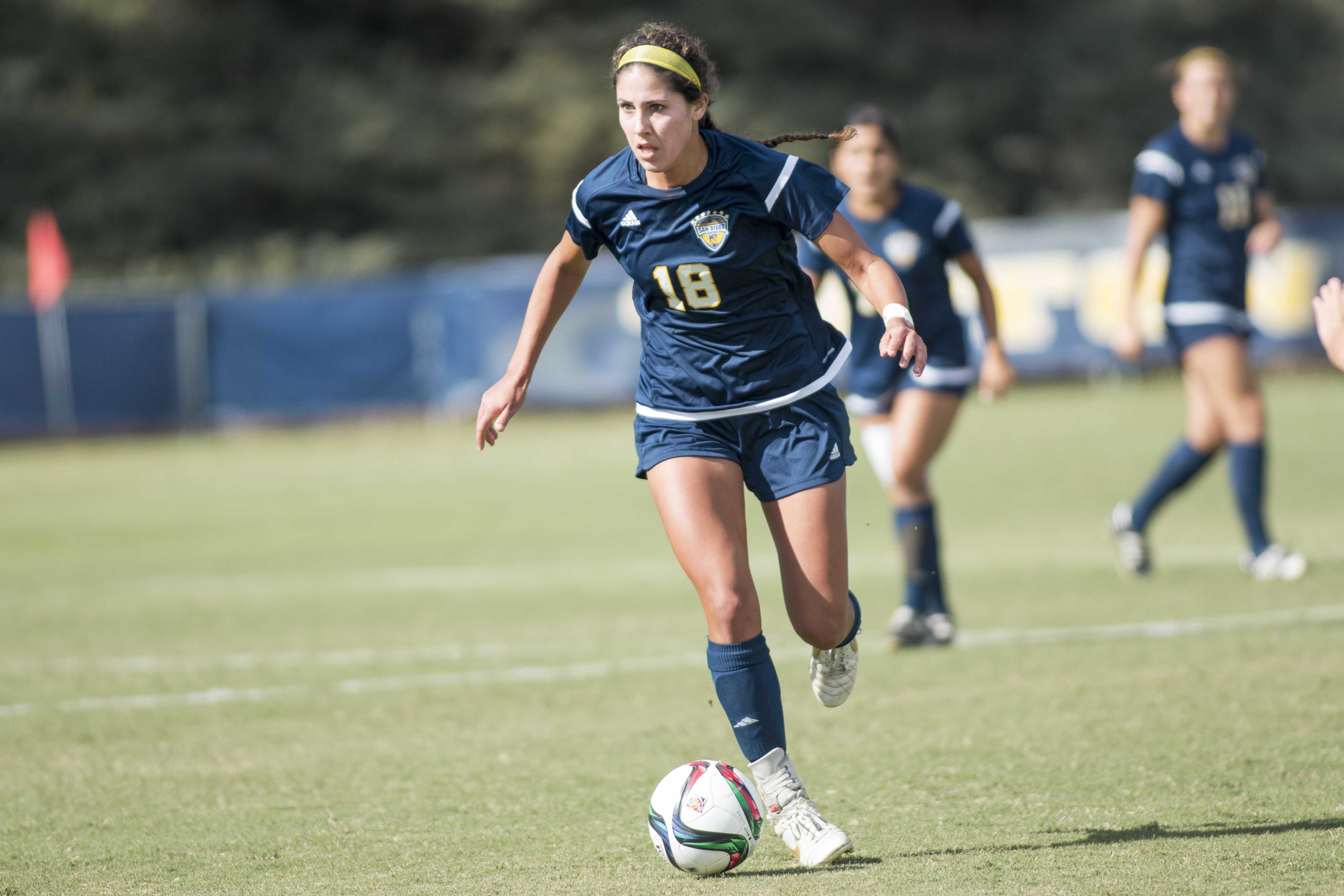 The UCSD women’s soccer team clinched two huge wins against Sonoma State and Cal State Stanislaus this past weekend en route to its record ninth California Collegiate Athletic Association banner and an automatic NCAA Championship berth. The Tritons bested the No. 10 Seawolves in the semifinal round in a stunning 3–0 upset, then went on to crush the Warriors 3–2 in the title match. UCSD ends the CCAA tourney at an impressive 15–5–1 overall record and will travel up to the Pacific Northwest this week to begin their bid for the ultimate crown.

UCSD pulled a huge 3–0 upset against No. 10 Sonoma State on Friday afternoon in the CCAA semifinals. Within 13 minutes of play, the Tritons took their first lead of the game as sophomore midfielder Jordyn McNutt sent a cross to a wide-open redshirt junior midfielder Kiera Bocchino at the post. Bocchino then launched home her third goal of the year to start the scoring. Just minutes later, sophomore forward Katie O’Laughlin hit the target after a poor defensive clearance by the Seawolves to expand the Tritons’ lead to two.

Sonoma State attempted to battle back in the 19th minute as senior midfielder Margi Osmundson fired a shot off from the top of the penalty area, but senior goalkeeper Kelcie Brodsky reached to make the save to hold the Seawolves at zero.

UCSD struck again a mere 51 seconds into the second half. Freshman forward Mary Reilly sent a cross to the far post, and Bocchino seized another chance to score, heading the ball to the right side of the net. Despite a touch by Sonoma State senior goalkeeper Ashley Luis, the ball bounced straight into the goal to put the Tritons in a dominant 3–0 position with 44 minutes left to play.

“I’m a forward at heart,” Bocchino told the UCSD Athletics Department. “Playing that outside-mid position kind of gives me a chance to dribble and do all that, and I also get to be in the box for other people’s crosses.”

Brodsky held firm in the goal once again in the 54th as freshman midfielder Alexandra Gonzalez attacked from point-blank range. Despite the effort, Brodsky dove to the right on the attempt to block the shot and hold her team’s advantage. She amassed 10 saves for UCSD on the day, achieving her ninth season shutout.

With the victory, the Tritons jumped to 14–5–1 overall. The win effectively ended the Seawolves’ 15-game win streak and their bid for the CCAA crown. They concluded their season at 13–2–3 overall.

UCSD held firm through a late rally attempt to snag a 3–2 victory over Cal State Stanislaus, nabbing its record ninth CCAA banner and a guaranteed spot in the 2015 NCAA Championship bracket.

After an offside call in the 18th, the Tritons seized their first chance to score. Warrior senior goalkeeper Chelsea Lewandowski took the free kick, but Reilly intercepted. After a quick touch to get her bearings, the freshman phenom took a right-footed shot into an empty net to set the score at 1–0.

UCSD doubled its advantage in the 25th. The Warriors’ senior defender Nichole Donald took down Reilly in an attempt to regain possession, earning herself a red-card ejection and putting the Tritons at a one-player advantage. McNutt stepped up to the spot to take her team’s penalty kick and launched a high shot past Lewandowski’s fingertips for a 2–0 lead.

The Tritons then earned a critical insurance point in the 54th. McNutt fired a corner kick into the penalty area, and after bouncing once off the post and again off a Warrior defender, the ball rolled into the net to put UCSD at a menacing 3–0 lead. The score was ruled an own goal.

“We’ve been working so hard all season to win this game, [so] it just feels so good to have all this hard work pay off,” McNutt told the UCSD Athletics Department.

However, Stanislaus was prepared to make a comeback. Junior defender Nicole Larson notched one point at 85:50, and junior forward Kirsten Coleman posted one more less than a minute later to put the pressure on UCSD. However, the Tritons remained strong in the final minutes of the game and put away the 3–2 victory to close out the CCAA tournament.

“It got scary in the last few minutes,” UCSD Head Coach Brian McManus told the UCSD Athletics Department. “This team is capable of anything as long as we manage the games. We’ve got the kind of players who are always going to upset people.”

UCSD rounded out the tourney at 15–5–1 overall. It has taken home the CCAA crown in all nine of their title round appearances thus far. It enters the NCAA Championship as the fourth-seed in the West Region and will start their campaign against fifth-seeded Seattle Pacific University (13–4–2) on Thursday, Nov. 12 in Bellingham, Washington at 7 p.m. The winner of this game will advance to play No. 2 and top seed in the West Region, Western Washington University (18–1–1), who will serve as the host.