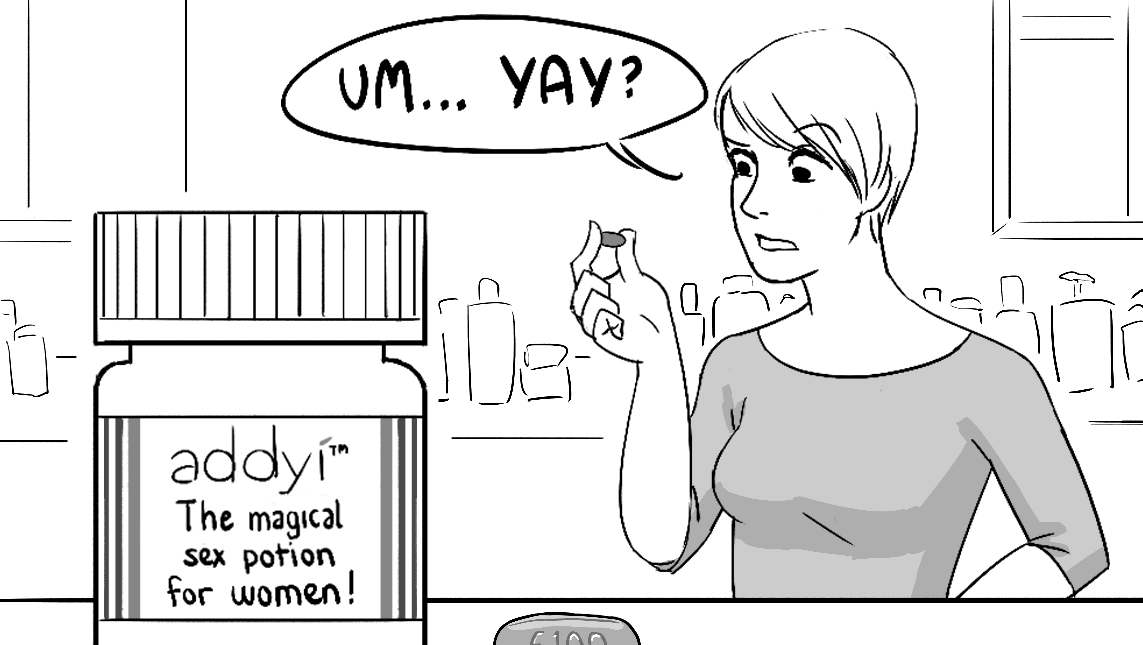 Yet another drug designed to treat sexual dysfunction hit the market a few weeks ago: Flibanserin, aka “Female Viagra.” There are 17 different drugs currently being produced to treat erectile disfunction, but with this new drug, it seems the pharmaceutical industry has finally cast its eyes over the female libido. That’s right, ladies, Flibanserin aims to treat women’s — not men’s — sexual dysfunction. Heralded as “The Female Viagra,” some believe Flibanserin is an important solution to a real problem and gives women the attention they’ve previously been denied. But will “the little pink pill” — named in a not-so-subtle appeal to our abstract concept of “femininity” — open doors for a formerly sexually repressed group of women, or will it do more harm than good? Female sexual liberation may have come in the form of a pill with the advent of birth control in the ‘60s, but I think it’s safe to say that this pill does not have the same or even similar “liberating” qualities. In truth, the drug raises a variety of questions that are deeply mired in the complicated world of institutionalized sexism.

Conceptually, “Female Viagra” sends a somewhat nuanced and certainly complex message. On a positive note, it shifts the focus in the bedroom away from the notion that sex is an act geared primarily toward achieving male pleasure. It says, “Hey, women have a sex drive too, and our sexual satisfaction is just as important as any other man’s.” On the other hand, it feeds into an already hypersexualized culture. A culture that, in one extreme, tells women having too much sex makes them a whore and, in the other extreme, inundates them with details on how to be sexier, how to give the greatest blow job, how to get bigger breasts and a firmer butt. In short: How To Be The Perfect Sex Object.

In a sense, this drug is also suggesting that if you’re not feeling it, there’s probably something wrong with you. You don’t only need a sexy body, you also need a sexy mind. This is, in fact, exactly what the drug intends to achieve. Rather than treating an actual, physical dysfunction, it aims to treat an assumed mental/psychological “dysfunction.” In this way, Flibanserin is really nothing like Viagra at all. The BBC explains that “while a Viagra pill treats erectile dysfunction by improving blood flow to the penis, Flibanserin was developed as an antidepressant and boosts sexual desire by balancing chemicals in the brain.”

But what exactly is the dysfunction Flibanserin is medicating? Well, the FDA approved it to treat acquired, generalized hypoactive sexual desire disorder. The Diagnostic and Statistical Manual of Mental Disorders, however, has combined female HSDD — the disorder that Flibanserin claims to treat — and female arousal dysfunction into a single syndrome called sexual interest/arousal disorder. The DSM-V also suggests that treatment of sexual interest/arousal disorder “should begin with patient education, as women often have no expectation of what is ‘normal’ or how to express themselves.” It further explains that it “is a complex and hardly understood condition … [and] may be caused by a multiplicity of biological, social, psychological, environmental and hormonal factors.”

In short, the disorder the little pink pill is prescribed for might not even be medically treatable, depending on the specific case. It’s also relevant to note that Flibanserin was previously rejected twice by the FDA, due to a concern with side effects, including nausea and dizziness. Clinical trials of the drug reported only one more enhanced sexual experience per month for women taking the pill compared to those in the placebo group, according to The New York Times.

So, it seems what we’re really looking at here is more of a manipulation of the public by the drug-pushing pharmaceutical industries. This time, they were able to finagle a fabricated feminist issue to line their pockets with cash. It would be a wasted opportunity not to, seeing as how profitable Viagra has been. As Rebecca Holliman writes in her U.S. News article, “Fixing women for profit is popular. Women are expected to be impossibly thin (we have a pill for that) and should have physics-defying large-yet-perky breasts (we have surgery for that). Now we should also feel sexy constantly.” Indeed, Flibanserin is not really a move toward female empowerment but rather an inept medical quick-fix to a problem that is in many ways as social as it is physiological.

One thought on “Female Viagra”