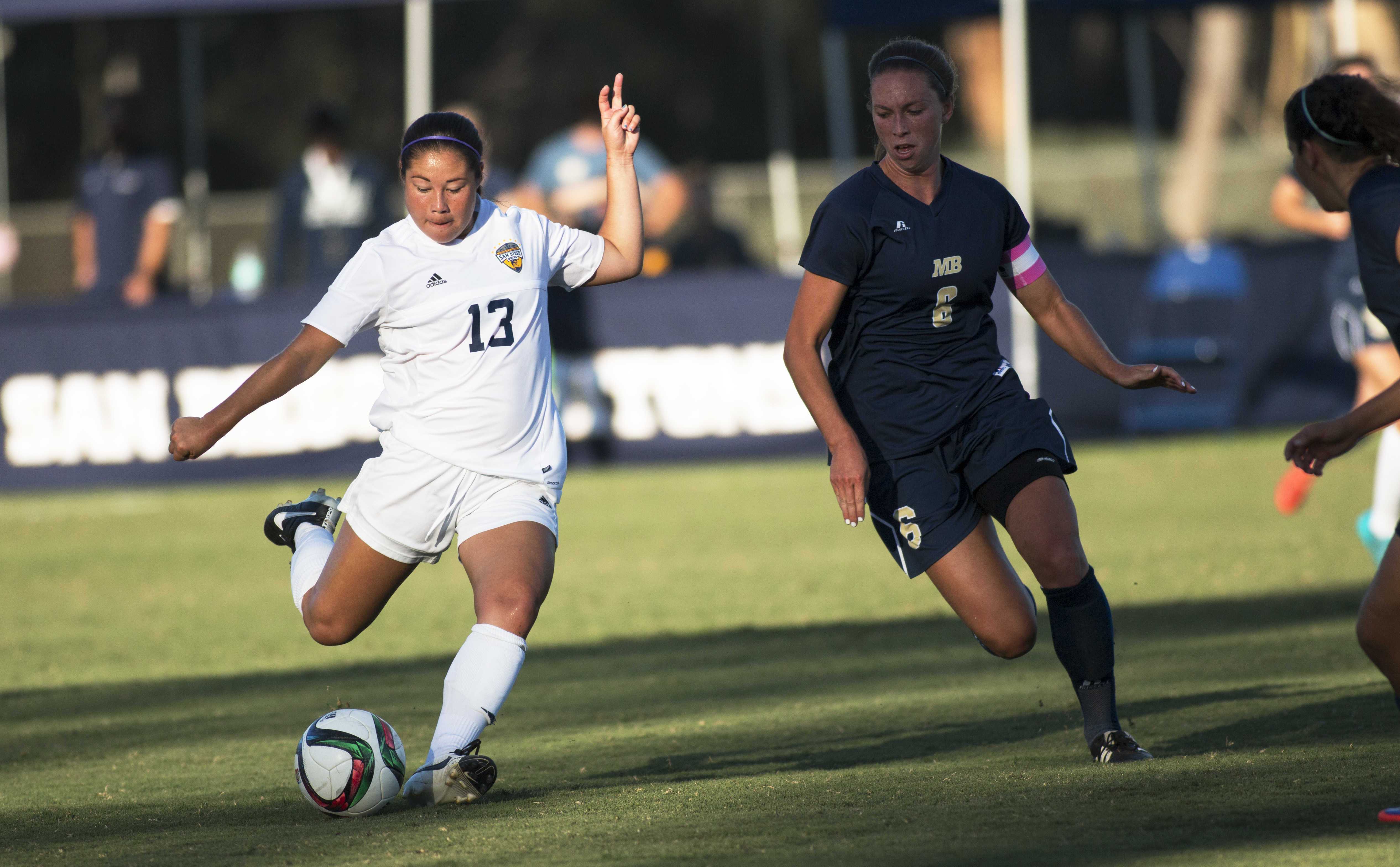 The UCSD women’s soccer team made another jump in the California Collegiate Athletic Association rankings this past weekend, moving into a temporary tie for first place after besting Humboldt State 1–0 on Friday and then dropping to second place after a close 1–0 loss to No. 11 Sonoma State on Sunday. With the weekend’s results, the Tritons now stand at 9–5–1 overall and 5–3–1 in the league as they approach their final conference matches.

Redshirt Junior defender Meghan Berry had the only scoring play of the game on a free kick in the 21st minute. Sophomore forward Katie O’Laughlin came across the box to finish the shot but headed the ball just high of the mark, hitting the crossbar out of Humboldt’s senior goalkeeper Caitlin Plese’s reach. Redshirt junior midfielder Kiera Bocchino caught the rebound and sent a header home to give the Tritons an early advantage.

“It was a nice goal, and getting it so early in the game, put us in good position,” UCSD Head Coach Brian McManus told the UCSD Athletics Department. “ Meghan [Berry] got it started with a free kick from about 40 yards, straight on. Katie [O’Laughlin] came across the goal area and headed it over the keeper and off the crossbar. It took one bounce before Kiera [Bocchino] came on to head it in from about two yards out.”

The Lumberjacks’ junior midfielder Kylie Forbes made an attempt to respond in the 24th minute, but senior goalkeeper Kelcie Brodsky denied the shot to hold the score at 1–0. The Tritons hung on for the rest of regulation play, playing a highly offensive game and out-shooting Humboldt by a huge 23–5 margin. Plese kept busy in the Humboldt net, saving nine of 10 shots on goal by UCSD in the first half alone; she denied seven more in the second half to hold the Tritons to one. Brodsky notched three saves in the net, good for her fifth individual clean sheet of the season and the 24th for her collegiate career.

“This was a really good win for us,” McManus said. “We could have had four or five goals, as the statistics indicate. We created some great chances, but their keeper made four or five big-time saves.”

The tables were turned on Sunday as Sonoma State edged UCSD 1–0. The Seawolves notched eight shots on goal in the first half alone, snagging the lead in the 18th minute after senior defender Marissa Marable launched a right-footed shot just past Brodsky’s fingertips into the upper left corner of the net.

“We didn’t play very well in the first half, but we were better in the second,” McManus said. “It really came down to one good opportunity on each end. They finished theirs, and we didn’t.”

The Seawolves out-shot the Tritons 19–5 in the match. Freshman forward Mary Reilly notched three of UCSD’s five attacks on goal; Brodsky held firm in the Triton net with a season-high 12 saves. The Tritons dropped to second place in the CCAA, while the Seawolves reclaim possession of the first-place spot and improve to 10–1–2 overall. Sonoma State remains undefeated in league play at 7–0–1.

UCSD rounds out its conference schedule this week, as it took on Cal State San Marcos at home on Wednesday, and will be on the road to take on joint CCAA second-place holder Chico State on Friday.