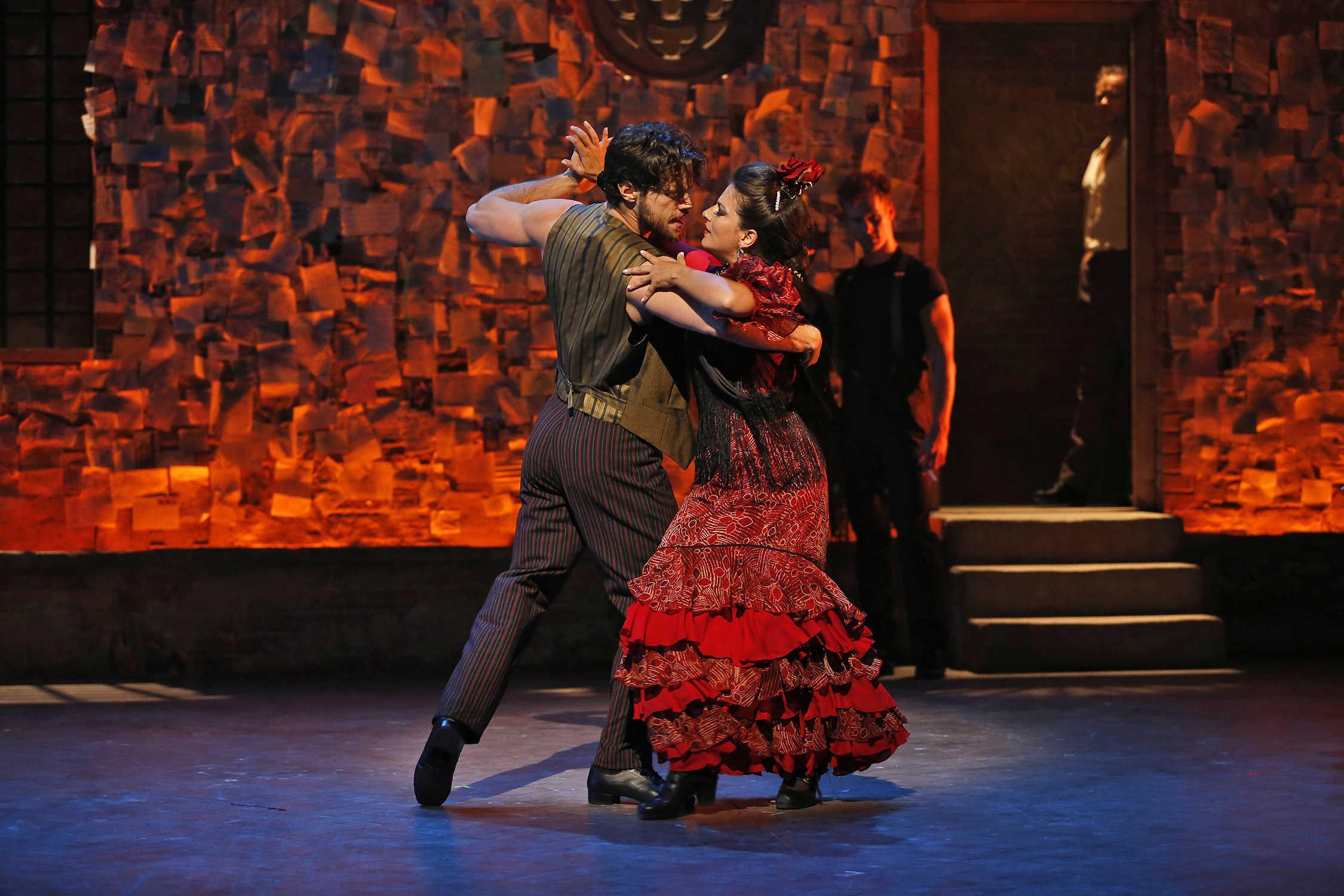 Striking dance styles and an astounding attention to aesthetics abolishes the need for dialogue in “In Your Arms,” The Old Globe’s stunning latest production.

The dance began with a dubious tap of his foot and a coy snap of her wrist. They were 50s teens exploring the charms of adolescence, co-workers dreaming of daring, unspoken romance, Parisian lovers delighting in an unlikely pairing. The Old Globe’s latest production, “In Your Arms” is undoubtedly a love story, but not one of the usual sorts: with neither dialogue nor an intermission, the play places an ambitious reliance on a series of aesthetically alluring vignettes. Both fast-moving enough to prevent the audience from dwelling on full bladders — a potential consequence of an unbroken 105 minutes — and varied enough to discourage any desensitization of viewers’ emotional palates, the production is a tremendous success and a thrilling tribute to an all-enduring theme.

To convey this theme — resilient, lasting romance — “In Your Arms” never turns to flirtatious banter or dramatically shouted confessions of love. Rather, the production places its focus on aesthetics, aiming to craft a visually powerful portrayal of a feeling we’ve come to appreciate through language and touch. As much as “In Your Arms” is a story of love, it is also, undeniably, one of beauty. Award-winning director and choreographer Christopher Gattelli works toward a striking overall aesthetic, unifying the distinctive styles of each vignette with a charmingly original score by Stephen Flaherty and a common backdrop.

The play is set at the Casa di Giulietta in Verona, the Capulet family’s imagined residence in Shakespeare’s “Romeo and Juliet.” One of its walls — one famously covered in the letters and tokens of lovers past and present — forms the background of the play, cunningly linking the series of individual stories as if they were the letters being enacted. Yet, despite following a single overarching style, the vignettes each convey a beauty of their own, telling the stories of lovers throughout time and across cultures through scene-specific dances, costumes and lighting.

A fitting reenactment of Shakespeare’s passionate balcony scene acts as the production’s prologue, unfurling into “In Your Arms,” a touching parade of unknown lovers whose dance continues in “Sand Dancing” and in the reprise. An element of drama is introduced in “The Lover’s Jacket,” a fiery tale of love stolen and reclaimed, told through fervent tangos and flamencos. The bold red costumes and emotional expressions of dancer Glenda Sol Koeraus craft a passionate, irresistible energy that is drastically altered by the playful “Love With the Top Down.” The scene of two teens exchanging endearingly awkward signs of affection is light and nostalgic, an atmosphere that is drastically altered in “A Wedding Dance,” a tragically beautiful contradiction of love and evil set in Africa and conveyed through powerful shadow play. The constant fluctuations in mood are the result of thoughtful organization: comedy is preceded by drama, alternating with each vignette to successfully hold the viewer’s attention.

Perhaps the most unexpected comedic relief came in “The Dance Contest,” a hilarious competition between dancers from the Soviet Union and United States. Lustful desire exchanged the political tension for one of a more romantic nature, and a case of jealousy resulted in Jen Harris being held at gunpoint, only to provoke her aggressor into breaking character. But the break only added to the hilarity of the scene, causing other dancers to lose their composure in a comical pause that thrilled the audience and retrieved them from a mid-show lull brought on by slower paced scenes “Life-Long Love” and “Intergalactic Planetary.”

Yet, “In Your Arms” certainly achieves beauty. The production presents an exceptional portrait of lovers solely through dance and aesthetics, perhaps conveying a more powerful sense of romance than dialogue ever could.