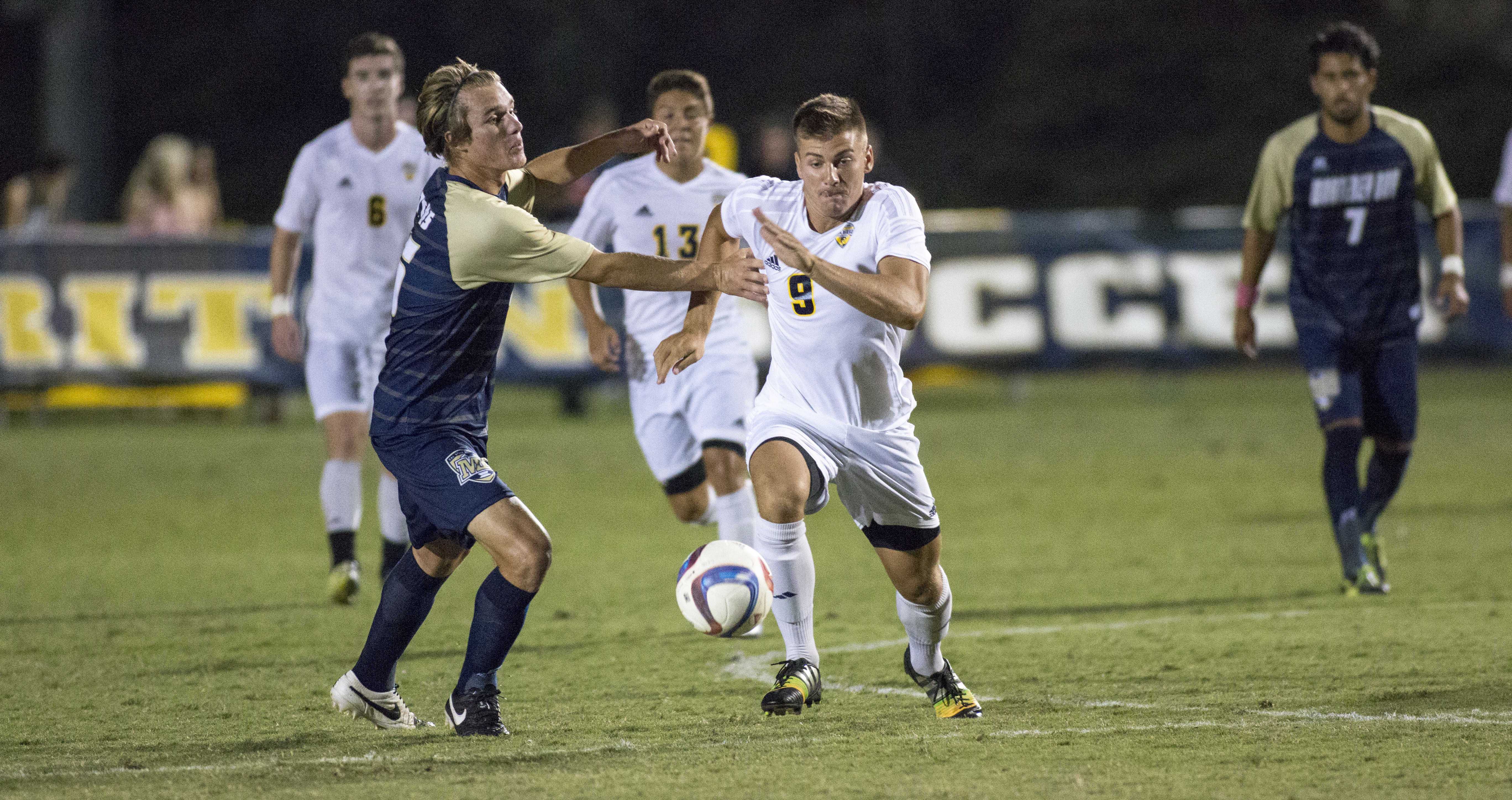 UCSD in a risky spot as CCAA championships draw near.

The UCSD men’s soccer team ended a tough weekend of play with a 2–2 draw at Humboldt State on Friday and a disappointing 3–0 shutout at Sonoma State on Sunday. After Sunday’s play, the Tritons sit at 5–5–6 overall and 4–3–4 in the California Collegiate Athletic Association, putting them in a perilous position as the league championships draw near.

UCSD rallied twice through double overtime to end Friday’s matchup against Humboldt State at a 2–2 draw — an exact repeat of last year’s result.

The Jacks’ sophomore forward Trice Smith opened the scoring in the 34th minute, finding the back of the net off a cross from junior forward Riki Michael to set the score at 1–0. The Tritons responded in the 64th minute as freshman midfielder Brandon Monteiro Magpayo nailed his first penalty kick of the season to tie the teams up. However, Humboldt State’s redshirt freshman midfielder Daniel Allred seized an opportunity to put his team back into the lead in the 79th, scoring virtually unassisted off a poor attempt to clear by the UCSD defense.

Junior forward Sam Palano evened things back out in the final eight minutes of regulation play after a handball, hitting the target on the penalty kick to equalize and send the teams into overtime. Despite the Tritons playing a man up in the final 6:09 of the second overtime, the teams remained deadlocked until the final whistle. With the result, UCSD slid to 5–4–5 overall and 4–2–3 in CCAA play.

“It was a hard-fought game against a good team that is much better than their record,” Head Coach Jon Pascale told the UCSD Athletics Department. “Our guys showed a lot of character coming from behind twice in the match.”

Unable to rally as they did on Friday, the Tritons suffered a disappointing 3–0 shutout at Seawolf Soccer Field on Sunday against Sonoma State. With the loss, the Tritons fell to 5–5–6 overall and 4–3–4 in the CCAA.

The Seawolves opened up the scoring in the 29th minute. Senior forward Brenton Frame stepped up and launched a penalty kick deep into the back of the net to push his team to a one-goal advantage. UCSD’s freshman forward Nathaniel Bloom took a chance to equalize in the 37th, but Sonoma State sophomore keeper Mitch North tipped Bloom’s effort just high of the mark to hold the lead entering the half. The Seawolves out-shot the Tritons 5–3 at the half.

Sonoma increased the gap to two in the 52nd when senior midfielder Sean Callahan broke through the UCSD defense and launched a shot into the net from 10 feet out. Junior forward Armando Coronel drove the knife home in the 83rd, netting a shot from 15 feet out to set the Seawolves at a massive 3–0 advantage. The Sonoma State offense out-shot UCSD once again by a 7–5 margin while North held firm in the goal, amassing three saves on the way to victory.

The Tritons will be back at home against conference foe Cal State San Marcos at 4:30 p.m. on Wednesday, then will hit the road to face off against Chico State at 4:30 on Friday afternoon at University Soccer Stadium.