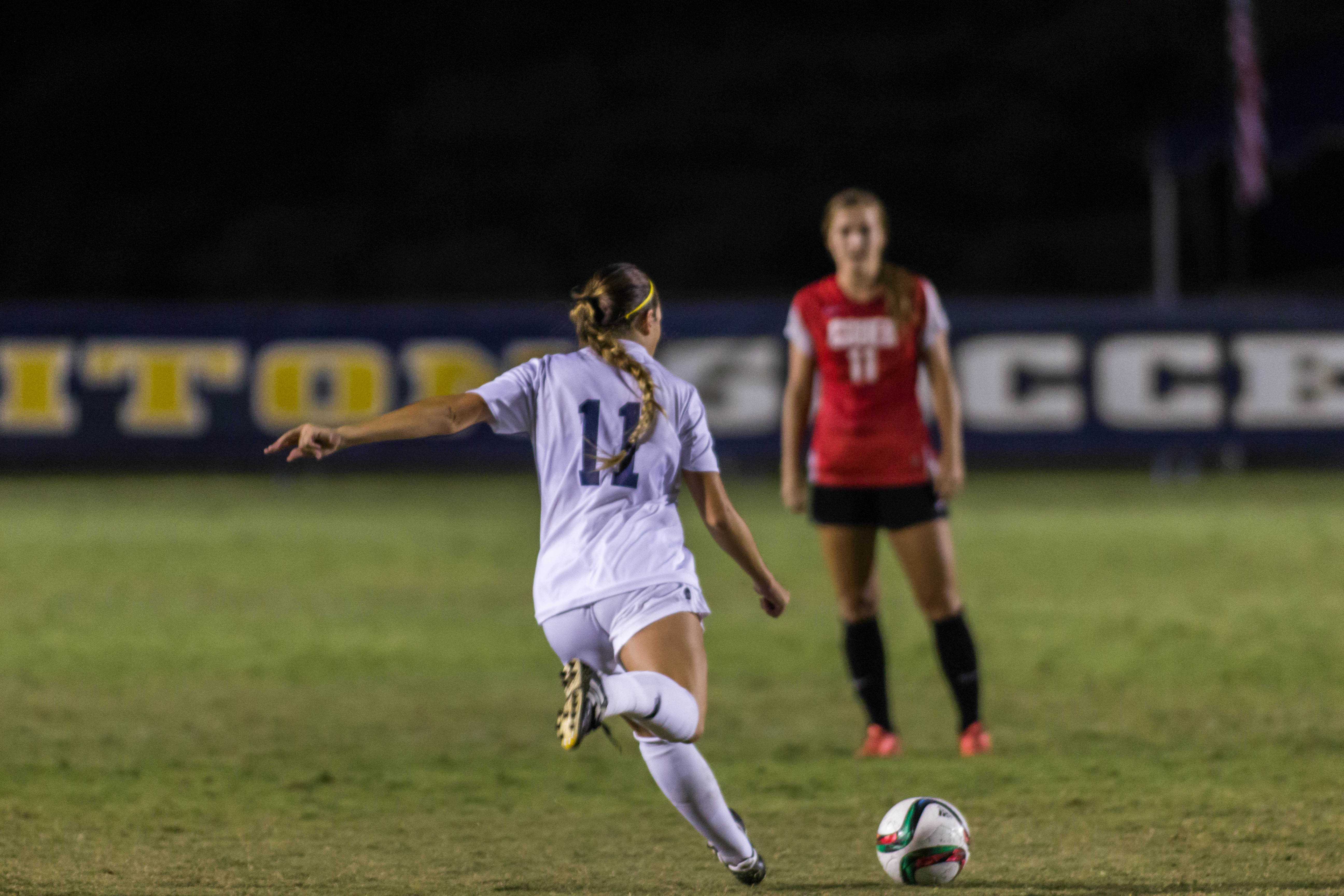 Coming into the weekend on a two-game win streak, the UCSD women’s soccer team split its first conference road games of the season, defeating Cal State Dominguez Hills 4-2 on Friday night with the help of a four-goal performance from freshman forward Mary Reilly, but suffering a disappointing 1-0 loss two days later to Cal State Los Angeles after giving up a penalty kick at the 74th minute.

The Tritons were shorthanded in their frontline Friday night as then-reigning CCAA Player of the Week sophomore forward Katie O’Laughlin and her fellow forward, freshman Megumi Barber, were both inactive due to the one-game suspension for red cards they received in last week’s hard-fought victory over Cal State Stanislaus. Freshman midfielder Summer Bales got the nod for her first collegiate start as left wing, while redshirt junior co-captain Kiera Bocchino shifted back to a forward position.

Reilly’s first goal came unassisted at the 18-minute mark. Just 13 minutes later, sophomore midfielder Jordyn McNutt assisted Reilly for her second goal of the game. Two minutes out of the half, Reilly delivered yet again with the hat-trick goal, giving the Tritons a comfortable 3-0 lead. The last time a Triton scored a hat-trick was Shelby Wong, almost four years ago, in a 5-0 landslide against Humboldt State. Despite the scoring outburst from Reilly, Head Coach Brian McManus also credited the team for giving her the easy looks.

The Toros netted two goals themselves, one in the 54th minute and what seemed like an impossible goal in the final 14 minutes. However, Reilly would strike again with her fourth goal in the 68th to put away the Toros. The last Triton to score four goals was Megan Dickey in an 11-0 home trumping of Central Washington over a decade ago. With the four goals, Reilly’s total number of goals in the season now rests at seven, surpassing O’Laughlin’s six to lead the Tritons.

“[Associate Head Coach Kristin Jones has] been working with Mary [Reilly] to use both feet and get out of the habit of going to the near post so much,” McManus added. “Her first two goals tonight were both left-footed to the far post. She had four good goals.”

Two days later, the Tritons traveled to Cal State Los Angeles, where they fell to the Golden Eagles 1-0 in a grind-it-out game. With O’Laughlin and Barber back in the lineup after their one-game suspension, the Tritons looked to extend their win streak to four.

Coming off her dominating four-goal performance, Reilly struggled to find the target as Cal State Los Angeles held her shotless until the 66th minute.

The two teams were gridlocked for the majority of the game. In the first half, both teams combined took only five total shots. The game saw more action after intermission, as UCSD upped its number of shot attempts to nine.

The 0-0 tie was finally broken in the 74th minute when a UCSD defender was called for an infringement in her own penalty box. Cal State Los Angeles’ junior defender Danielle Telles was able to net the ensuing penalty kick, giving the Golden Eagles the late 1-0 lead. Telles’ goal marked only the sixth goal of the year for Cal State Los Angeles. With a little under 16 minutes remaining, the Tritons had three good opportunities to equalize but were unable to convert on any of the attempts.

“In the first half, we played well,” said McManus. “We could have put the game away, but we didn’t. We came out complacent in the second half, bad passing, poor decision-making and that led to silly free kicks, corners and eventually the penalty kick that decided it. A win today [could have put us at] second in the conference. Now we’re tied for sixth.”