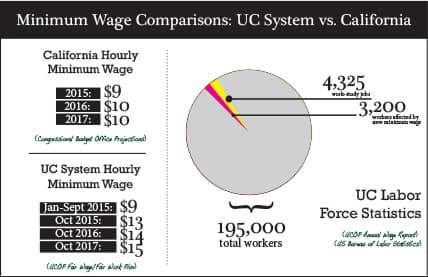 UC President Janet Napolitano implemented the first phase of her systemwide “Fair Work, Fair Pay” plan last Thursday by raising the minimum wage to $13 per hour. Eligible University of California employees will then receive raises of $1 per hour each year for the next two years.

Kate Moser, Media Relations Representative for the University of California, told the UCSD Guardian Napolitano’s intent behind the new wage policy is to support the university system’s employees.

“President Napolitano believes raising UC’s minimum wage is one critical way the university can support its employees and their families, as well as ensure a fair wage for workers employed by contractors hired by UC,” Moser said.“The University of California is the first public university in the nation to voluntarily establish a $15 minimum wage, and with this change, the UC [system] is a leader in the national effort to establish a fair minimum wage.”

The UC Office of the President’s press release describes how the oversight will be used to implement new reporting systems.

“As part of the new policy, [the] [UCOP] will enhance its oversight of contractors and subcontractors for wages and working conditions,” UCOP stated. “This includes a telephone hotline and online reporting system, both already in place, that contract workers can use to report complaints and issues directly to the Office of the President.”

Alberto Perez, a student at UC Santa Barbara, told the The Daily Nexus of UCSB about an unspoken rule the UC system has regarding part-time student workers.

“For student workers, the University of California has had this kind of unspoken rule that suggests students don’t work over 20 hours because it might cut into their schoolwork and education, which makes sense in most cases,” Perez said.

A.S. Vice President of External Affairs Krystl Fabella criticized the plan for essentially excluding students since it requires workers to put in 20 hours per week in order to earn the new minimum wage.

“The expectation of four hours every day of the week, just to meet the higher minimum wage bar, will exempt almost all student workers completely or drive students to work even more hours,” Fabella told the Guardian. “We should be alarmed that students are trying to work over 20 hours a week, when our focus should be on coursework, career development, mental health and academic growth.”

Moser responded to these concerns by stating that UCOP has no influence in the amount of hours worked per week and that they are decided upon by many factors.

“The number of hours per week worked by students who participate in federally funded work-study, as part of their financial aid packages is limited in some cases to no more than 20 hours per week,” Moser said. “[It depends] on the student’s total federal work-study award and other factors.”

Fabella also condemned the intent of the plan, which she argues was to gain positive publicity.

“No doubt it will benefit many workers and set a precedent for other universities, but it stands as nothing but a cop-out, a desirable national headline, while exempting thousands of struggling workers, not being enforced for a few more years,” Fabella said. “Moving forward means holding President Janet Napolitano accountable when she releases a statement that very explicitly and almost shamelessly states its priority of becoming the first public university in the United States to voluntarily establish a minimum wage of 15 dollars.’”

The plan also monitors any contractors who provide services for the campuses. The UC system will require that all contractors that are working with the university undergo annual audits to ensure employees are being compensated according to its guidelines.

Despite this, Fabella stated that this plan delays the fight for the fair compensation of subcontracted workers, who she explained are exploited, receive no overtime pay, work years without any benefits and cannot speak out due to a fear of losing their jobs.

“A lot of students are not aware that there are thousands of workers who are brought in from outside contractors and have been working for years under the UC [system] with wages less than half of their counterparts and without benefits,” Fabella said. “This minimum wage ordeal is for 2017 and therefore will act to cop-out on demands to give contracted workers benefits and equal pay for equal work NOW. Senate Bill 376 needs to get passed, which would require private contractors to receive equal pay.”