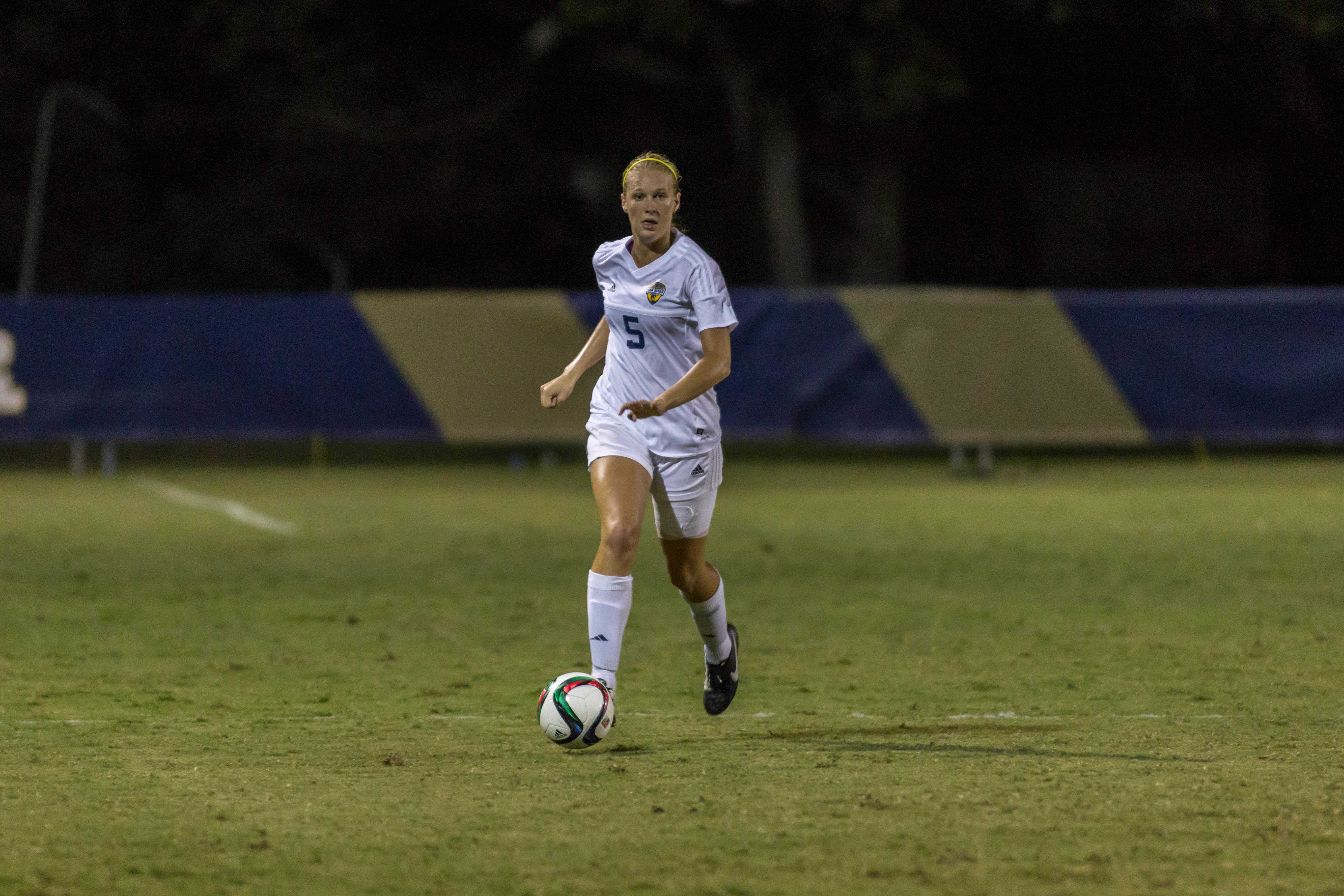 Over this past weekend, the UCSD women’s soccer team won two great games against visiting rivals Cal State East Bay on Friday and Cal State Stanislaus on Sunday, both wins claimed on its home turf at Triton Soccer Stadium. With this victory, the Tritons advanced to a 6–3 overall ranking and an even 2–2 CCAA ranking.

The match didn’t start out as hot for the Tritons as they had hoped —the Pioneers were able to take the lead at the 14th minute of the game. The Tritons were ready to fire back, however, and they did so six minutes later. Reilly scored off a beautifully-combined assist from sophomore defender Aimee Ellis and junior midfielder Jamie Benedetto to the cheers of hundreds of spectators.

“Last weekend was tough,” O’Laughlin told the UCSD Athletics Department. “We came back and got the three goals, and I think that proves that we had the spirit tonight.”

O’Laughlin, having just celebrated her 20th birthday on Thursday, came up on Friday night to score her first game-winning shot, scoring at the 54:29 mark. Reilly and co-captain junior midfielder Kiera Bocchino were both credited with an assist for the goal. Barber scored the nail-in-the-coffin insurance goal, her second this year, in the 79th minute. Bocchino was again credited for the assist.

“We should’ve been two goals up,” UCSD Head Coach Brian McManus told the UCSD Athletics Department. “We gave up a silly goal because of lack of communication, and suddenly we [found] ourselves [down 1–0], and the way it has been going on lately it would have been easy for the team to fold.”

The Tritons dominated the Pioneers as a team as they led in shots taken by a significant bulge, 24–6, with 15–2 in just the first half. After this win, the Tritons now lead in the all-time series between the teams, 8–1.

Sunday’s game against Cal State Stanislaus was an even more impressive win for the Tritons as they were critically short-handed, finishing the match with only nine players due to a pair of red-card ejections during the match. Despite this disadvantage, the Tritons held on tightly to their lead after O’Laughlin scored a goal at the 19th minute, ending the match 1–0.

After earning a free kick, Bocchino kicked the ball to the base of the far post, where O’Laughlin took the ball and scored on the opposite upper right corner. This is O’Laughlin’s team-leading fourth goal of the season and fourth consecutive goal over the past four games, all scored within the past 10 days. This is also her second consecutive game-winning goal, earning her the CCAA Women’s Soccer Player of the Week award. Bocchino also got her team-best third assist of the year.

The Tritons’ goalie, senior Kelcie Brodsky, had an incredible game as she made six saves during the match, which helped her pick up her third individual clean sheet of the season and 22nd of her career.

“The last seven minutes, there was no way we could go to overtime,” said junior defender Kirsten Sampietro. “Kelcie made an amazing save in the last couple of minutes; we were really lucky to pull it out. We’re back in it. Today it was organized; we had a lot more communication with the midfield.”

Barber had to sit out the game after earning successive yellow cards, netting the red card at the 39-minute mark. O’Laughlin met the same fate as she also netted two yellow cards in the second half, being sidelined with only three nail-biting minutes left in the game. Despite missing two positions, the Tritons persevered and came out victorious. Both Barber and O’Laughlin will have to sit out in the next match.