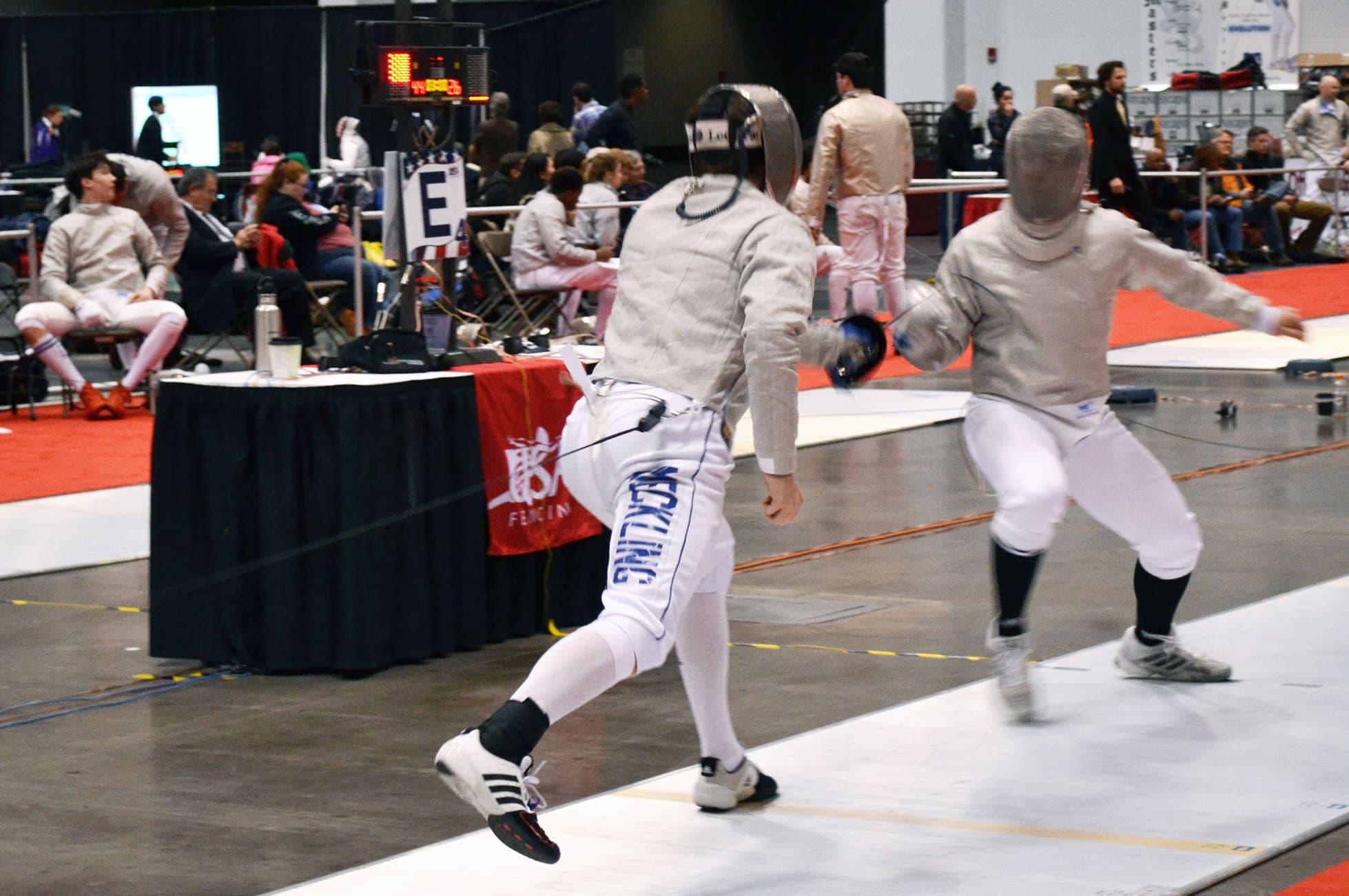 Peter Meckling fought through a cancer and two operations to come back to the highest level and place 6th as a senior at the NCAA West Regionals.

Everyone loves a good underdog story. Whether it’s a group of college unknowns forcing a miracle on ice or a determined dreamer getting carried triumphantly off the Fighting Irish turf, it’s always nice to see the little guy find some success. But for UCSD’s senior sabreur Peter Meckling, life in the summer of 2013 took a much graver turn than the average against-the-odds scenario.

Born and raised in Colorado, Peter grew up as a soccer player alongside his twin brother, Billy. For a fencer who now competes at the collegiate level, Peter entered the world of sword fighting at a late age when he and his brother entered an introductory fencing summer camp at their mother’s suggestion.

“We didn’t really start fencing until the end of the sophomore year of high school,” Peter said. “We just tried it. We ended up being pretty good at it, so we kept going and competed locally and a little bit nationally.”

Within a year after starting out, Peter’s natural talent for the sabre suddenly factored heavily into his college selection process.

“We looked at fencing schools that were also good engineering schools, which is why I ended up here [at UCSD],” Peter said. “I talked to Coach Josh [Runyan]. He knew we were applying, so I wasn’t just a walk-on.”

After touching down in La Jolla, Peter forged some of his strongest relationships with teammates and coaches in his first two years while also making a mark in competition. He recorded a handful of impressive podium finishes and even handed his brother, of University of Notre Dame, his only loss at the NCAA West Invitational in his freshman year. Halfway through his time at UCSD, things seemed to be going well for Peter.

On Friday, June 14, 2013, school was out, and summer had begun. Peter’s parents, whom he hadn’t seen in six months, planned to stay in San Diego for the break, and he was happy to see his brother and sister. However, before fun was to be had, Peter had to get an ultrasound that afternoon for a protrusion in his testicle that he had noticed for some time.

“I had never had an ultrasound, but it seemed to be taking a really long time,” Peter said. “When we went out to the car, and we were just leaving the parking lot out of Thornton Hospital, the doctor called and said, ‘Yes, Peter has cancer.’”

Yet after hearing the official diagnosis of testicular cancer, Peter kept calm and put on a brave face for his family.

“We talked about it a little but mostly we avoided it,” Peter said. “I didn’t want my mom to be scared, so I was trying to be strong. I didn’t want my brother and sister to freak out, especially my sister. I was worried, and I’m sure my parents were worried, but it was switched into the back of my mind.”

Amid the shock, there truly was little time to dwell. The following Tuesday, when Peter went to visit the oncologist for a check-up, a convenient opening for surgery was available on the same day, and, soon enough, Peter was in and out of a successful procedure.

Furthermore, a CT scan following the surgery indicated that there was a 75-percent chance that the cancer would not return. As junior year rolled around, Peter re-focused on an engineer’s daunting course load, and he returned as squad captain to the sport he loved, where he and his teammates openly joked about his partially removed manhood. After a tumultuous summer, things appeared to return to normalcy.

“By the time winter quarter came around, I wasn’t worried anymore,” Peter said. “I had done three CT scans by then, and none had shown lymph nodes growing, so I thought it was a thing of the past.”

However, just as the cancer seemed to be behind him, disaster struck again in the middle of winter quarter. During Peter’s fourth CT scan, his doctor discovered that the cancer had returned, and a lymph node had to be removed. Surgery was scheduled for spring break in three weeks, but NCAA Regionals were coming up that same week.

Peter panicked initially, but with the possibility of qualifying for NCAAs, he attempted to turn his attention toward fencing.

“I fenced at Regionals, and I was doing well,” Peter said. “I beat a lot of good people, and then I just fell apart. I just mentally lost it all. I lost matches I shouldn’t have lost, so I didn’t [get a chance to] make it to nationals.”

Despite the disappointment at Regionals, Peter underwent another thankfully successful surgery over break, after which his coaches and teammates came to visit him.

With a 99-percent chance that the cancer had officially gone, Peter then looked toward a formidable road to recovery. In the spring, he lived with his mother off campus, slowly battling the lingering pain from the surgery, which put Peter’s senior year as a fencer in doubt.

“I wasn’t allowed to lift anything for like a month,” Peter told the UCSD Guardian. “I carried a notebook around with me to class, and that was all that I could carry.”

Yet slowly but surely, Peter progressed. He caught up on school that summer and spent time regaining his strength. In mid-November 2014, he finally re-entered competition at the UCSD-hosted event BladeRunner. The two-day schedule of matches was the first action he had seen since his struggles at Regionals in March.

“It felt pretty great,” Peter said. “I spent a lot of time recovering, a lot of time not being able to fence at the level I wanted to fence at. BladeRunner showed that I was getting back there — that for as long as I’d been out, I could still fence. It was a really good feeling.”

Since then, Peter has competed fully this season and recently wrapped up his collegiate career with a sixth place finish at 2015’s NCAA Regionals behind some of the best fencers in the nation. Additionally, Triton freshman David Hadler took third in the foil and will represent UCSD at the national championships in Ohio next week from March 19 to 22, during which Peter will surely be cheering on his teammate.

As for himself, Peter will look back on his journey these four years as a great experience with the sport he loves, one that has helped him through the life-threatening hardships he has faced.

“Fencing has probably been the greatest part of my college experience so far,” Peter said. “All my friends are fencers. All of my greatest memories have been with fencers at tournaments. It would have been really tough without them. These guys and girls have all been there for me.”