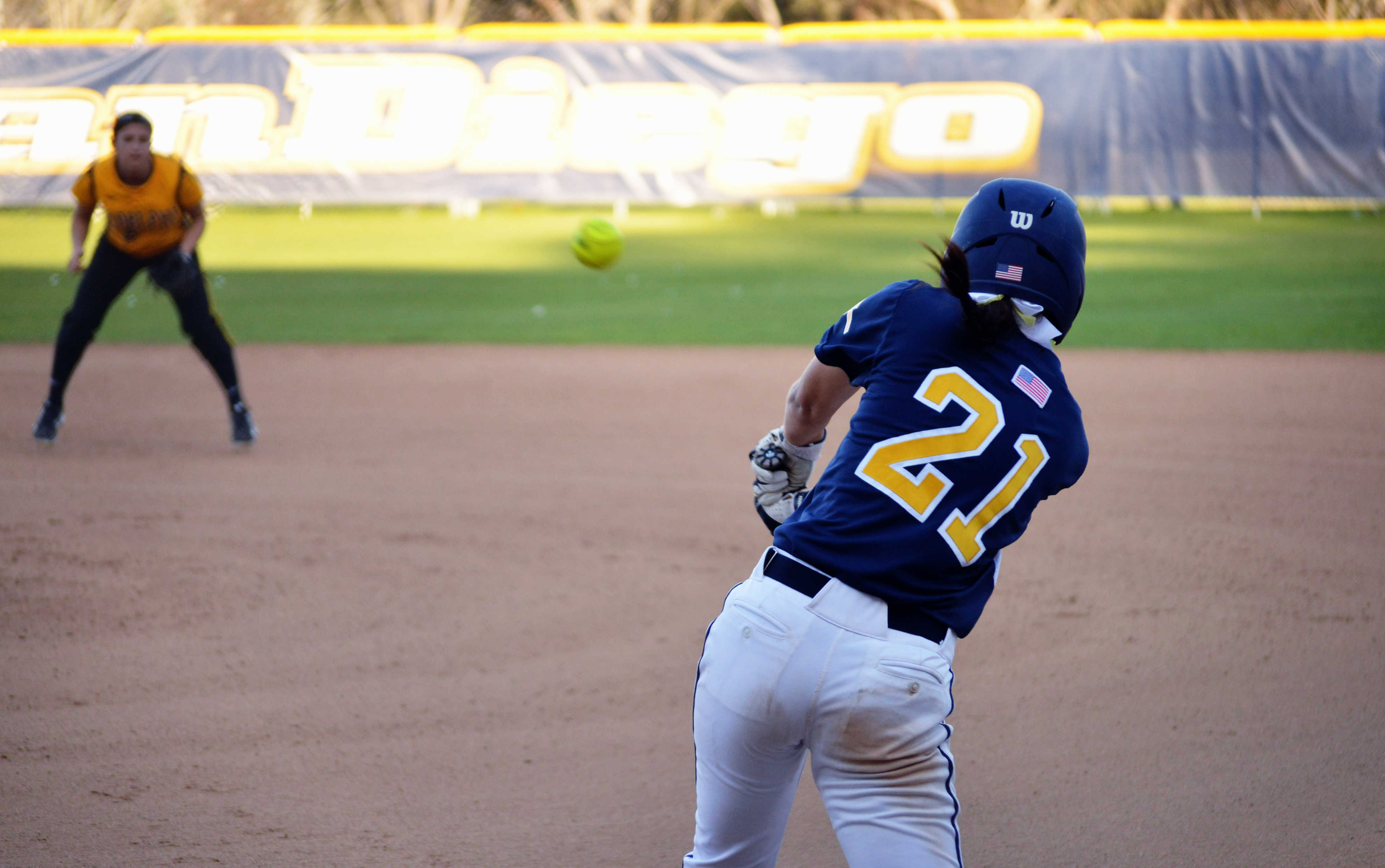 UCSD softball had trouble matching up against the conference leader, losing three out of four to Sonoma State.

The Triton softball team returned home this past weekend to face off against California Collegiate Athletic Association leader and rival Sonoma State, hoping to recover from last week’s losses against Cal State Monterey Bay. However, UCSD dropped three out of four games, losing the conference series to the Seawolves.

The Tritons now hold a 16–8 record overall and are 9–7 in the CCAA, with sole possession of the sixth spot in the conference.

Sonoma State clinched a victory in the series opener, shutting out UCSD 3–0. The Seawolves’ offense got rolling in the fourth inning, when junior right-hander Hannah Duarte allowed three consecutive base hits to bring in the first two runs. A throwing error by UCSD brought the score to 3–0 for the Seawolves. UCSD then sent in senior right-hander Mo Omori (2–1), who shut down the next 10 batters in the lineup, effectively quieting the Seawolves’ offense for the remainder of the game.

The Tritons attempted to rally back in the seventh inning. Freshman outfielder Kendall Baker singled to shortstop, ending the five-inning no-hit streak. Junior outfielder Taylor Abeyta followed up with another base hit, but the Seawolves caught Baker at second base to notch the first out of the inning. Sonoma State sophomore pitcher Amanda Llerena then sent the next two batters out swinging, ending the Tritons’ rally and the game.

The Seawolves struck first again in game two — junior shortstop Ancia Purdy scored the first run in the first inning off a ground out by junior second baseman Holli Brown. The Tritons finally found some offense in the second inning. With the bases loaded, freshman second baseman Kendall Woken hit a ground out to shortstop that sent freshman right-fielder Kelsi Maday home, while sophomore first baseman Emma Schneider subsequently scored on a throwing error to give UCSD a 2–1 advantage.

In the sixth inning, the Seawolves answered back and scored four runs off five base hits and two walked batters. An error by Triton freshman catcher Lauren Sanders put a fifth opposing run on the scoreboard to bring the score to 6–2. Despite a Schneider run in the sixth, the Tritons failed to overcome the deficit, ending Friday’s doubleheader with a 6–3 loss.

“Sonoma made a very good adjustment today against Mo Omori, our relief pitcher,” UCSD associate head coach Jessica Millsap said. “Tomorrow, we’re just going to have to be aware of that and come into the game with a different strategy.”

The big blue returned to Triton Softball field on Saturday for the remainder of the series, but fell short in game three despite a strong effort. The Seawolves snatched the first run of the game yet again — four walked batters in the first inning posted the score at 1–0.

UCSD battled back hard in the bottom of the second. A total of four RBIs from freshman third baseman Rachel Phillips, Maday and Abeyta gave UCSD a 4–1 edge. However, the lead didn’t hold for long: The Seawolves scored six unearned runs to reclaim their lead in the top of the third. UCSD attempted to close the gap, with Baker scoring one run in the bottom of the third and Schneider claiming another in the bottom of the fifth. Despite the offensive effort, the Tritons couldn’t take the final run and fell 7–6.

Despite the three losses, UCSD avoided the series sweep with a narrow 3–2 victory in the final game on Saturday. Maday and Abeyta scored for the Tritons in the third inning.

The Seawolves made a play to close the gap in the top of the fifth: sophomore third-baseman Olivia Lucchese scored off a triple by Purdy, posting the first run of the game on the scoreboard for Sonoma State. UCSD responded with a run by Woken in the bottom of the sixth, proving just enough in a 3–2 final score.

“I like to think the past is in the past and you can’t change it, so you just have to focus on what you can do and make future games have a better outcome,” Duarte said. “We are a great team, and if we just focus on how we play as a team, we can win.”

UCSD will be on the road again against Cal State Dominguez Hills, who is ranked one spot ahead, on Sunday, March 22 and Monday, March 23, hoping to rebound off the recent defeats.