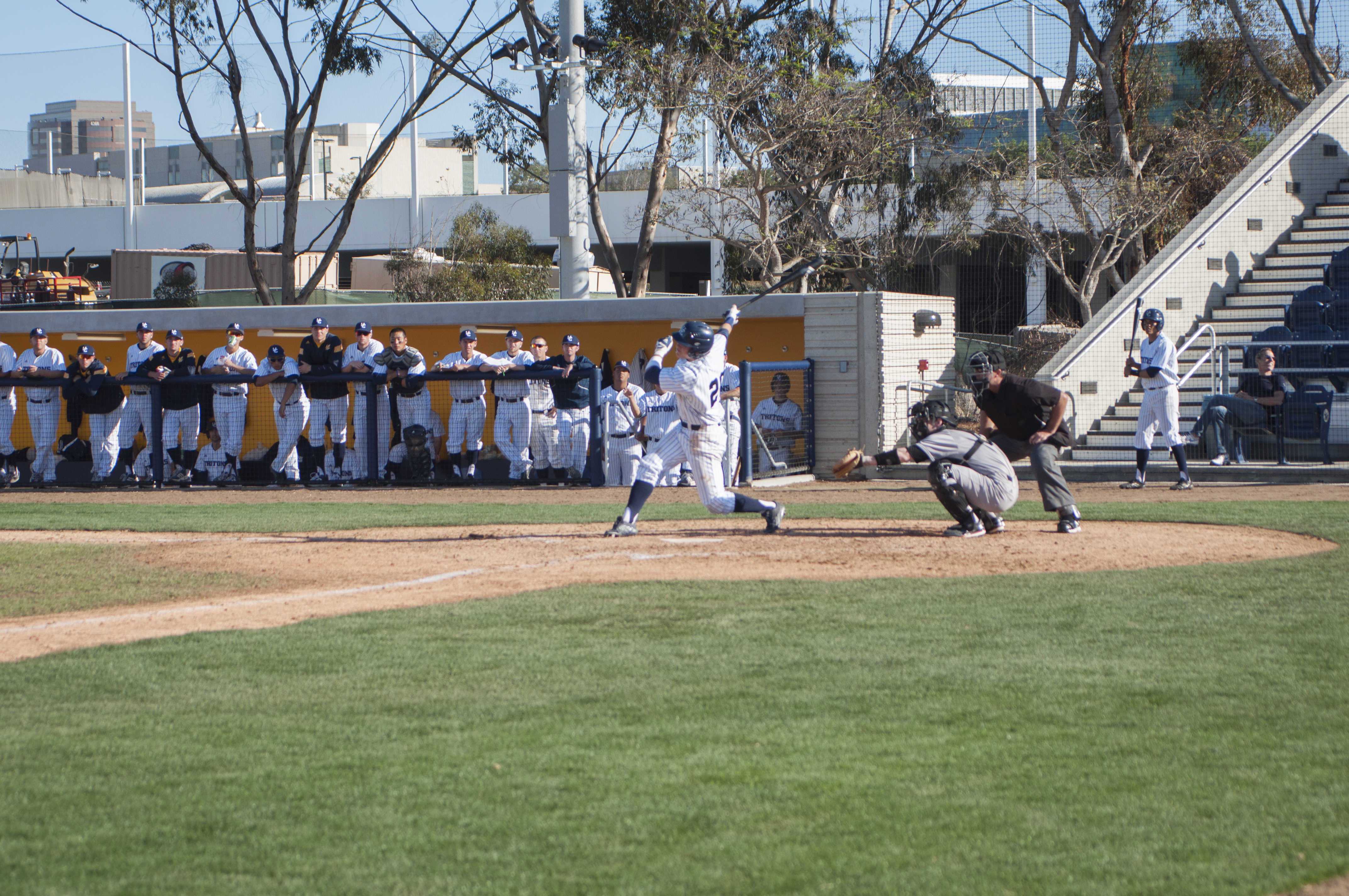 The No. 10 nationally ranked UCSD baseball team won three out of four against San Francisco State in its first California Collegiate Athletic Association action of the 2015 season at the new Triton Ballpark over the weekend. However, on the heels of the series win, the Tritons dropped a one-game non-conference matchup against Point Loma Nazarene University on Tuesday.

UCSD now stands at 7–4 overall and 3–1 in the CCAA while gaining momentum back after upsetting back-to-back losses to Colorado Mesa University the previous week before.

Game one on Friday ended with UCSD up eight to the Gators’ blank scoreboard. Junior right-hander Justin Donatella (1–1) struck out six in as many innings on the mound and allowed his first two walks of the season.

Sophomore centerfielder Brandon Shirley hit at the top of the order for the first time in 2015, going one-for-three and producing two runs and two stolen bases. Senior second baseman Erik Lewis had the best game of the night at the plate, scoring two runs, a double, two walks and a hit-by-pitch to go four-for-five. Aside from the veteran heroics, newcomer redshirt freshman left fielder Justin Flatt hit his first triple on the year as a Triton.

“We just came out here and executed the plan that we had,” UCSD head coach Erik Lewis told the UCSD Athletics Department. “We followed the game plan and it just worked out for us.”

Next, the Tritons clinched their first CCAA series on Saturday with back-to-back wins against San Francisco State in the series’ doubleheader. The Tritons produced a 12–4 victory in the first game and then secured a narrow 2–1 win in the seven-inning night cap.

The 12 runs in game one matched the season-high for the Tritons, but it was the five-run seventh frame that sealed the Gators’ fate.

Lewis repeated Friday’s four-for-five at the plate with another double, two runs and a RBI. Junior transfer and first baseman Zach Friedman added another double and hit his first triple as a Triton as well. Junior transfer and right-hander Alon Leichman (1–0) went four frames on the mound, struck out five, but ran into trouble before senior right-hander Dan Kolodin (2–0) took over. Kolodin threw the remainder of the game and was credited with only one unearned walk.

Senior southpaw Chad Rieser was credited with his first career save in game two, fending off two runners on base in the final inning and throwing out the remainder of the Tritons’ 2–1 win.

The Gators finally bested UCSD in Sunday’s fourth and final game of the series, blanking the home team 3–0. The Tritons have now suffered three shutouts in 2015, compared to only one recorded throughout all of last year.

On Tuesday night, the Tritons, who improved from No. 2 to No. 1 in the National Collegiate Baseball Writers West Region poll just the day before, met the Point Loma Nazarene University Sea Lions at Triton Ballpark and lost 9–8 in the non-conference standalone game. UCSD had a troubling night on the mound, rotating through seven from the bullpen and ultimately blew a 7–2 lead against Point Loma. The loss closed out the Tritons’ 11-game homestand.

UCSD will travel to Carson, California today for more CCAA action against Cal State Dominguez Hills with the first pitch scheduled for 2 p.m. After Friday’s game in Carson, the four-game series will return to Triton Ballpark for a doubleheader on Saturday, Feb. 21, starting at 2 p.m.

“We haven’t been on the road yet this year,” head coach Eric Newman said. “Obviously right now I’m not as concerned about what other teams are doing, but what we’re doing. There’s some things that we have to fix.”