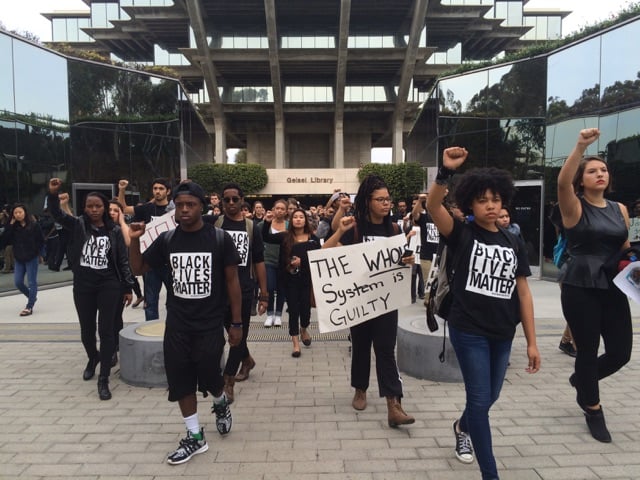 The Black Student Union held a demonstration in Price Center on Friday, Dec. 5, to raise awareness about the ongoing anti-black violence that police officers, security guards and vigilantes display toward black individuals.

Approximately 70 BSU members, who wore all-black with shirts which read “Black Lives Matter,” participated in the demonstration along with members from other student organizations and individual students as well. They surrounded the lower levels of Price Center —  half of the members lay on the ground by Tapioca Express, while the other half lay near the entrance to the tunnel, which provides access to the other side of the food court. The remaining members read names off of a handout which was passed out to the students. The handout was from the Malcolm X Grassroots movement, which contained the names of black individuals whose lives were taken by police officers, security guards and vigilantes from the year 2012 to the present.

BSU Chair Jazzalyn Livingston explained that because black students make up less than 2 percent of the UCSD student population, BSU felt responsible to speak out and mobilize on behalf of the members of the UCSD community that the group feels are disproportionately affected by the gross malfeasance of the American justice system.

“It is disheartening and demoralizing as black students to witness our people subject to police brutality, unfair execution of the law and a lack of protection under the law,” Livingston said in a statement to the UCSD Guardian. “The Black Student Union held this demonstration to raise awareness [of] the senseless killings of black people all across the country by the hands of police. We are also very well aware that these are not isolated incidents but a representation of the systematic structures of institutional racism, inequality and racial injustice, which is why it was extremely important for us to unmask the reality of our failed justice system while challenging the UCSD community to take a stance against it.”

Once each name was read off the handout, the members stood up and formed two lines near the entrance of the tunnel, directing the attention of anyone who walked through the tunnel to walk past the demonstrators as well. The members chanted different slogans, such as “What do we want? Justice! When do we want it? Now!”, “No justice, no peace, no racist police!”, a“Wake up” and “Shame.” They also shouted “We can’t breathe? You can’t breathe,” which was taken from the last words of Eric Garner, a 43-year-old man who was put in a chokehold and strangled to death in Staten Island by a police officer because he was selling unlawful cigarettes.

A police officer who watched the demonstration from the second story of Price Center spoke with the Guardian and said that he did not have enough knowledge of the actions that officers have taken toward black individuals to comment on the situations. He said that he could not comment on what occurred 3,000 miles away but that there are people in all lines of professions who act incorrectly and that in police officers’ particular line of work, the effects of their incorrect actions are obviously greater. He explained that mistakes do happen and that there are always two sides to any story and said that what happened to Eric Garner was a tragedy.

A.S. Council President Robby Boparai joined in the demonstration and said to the Guardian that he is excited to see UCSD students mobilizing.

“I think this is a really strong change for our campus … We’ve been a pretty politically neutral environment for a long time,” Boparai said. “I wanted to support [the demonstration] because I definitely think this is a worthwhile cause. Our students should be pissed, you know. We should definitely mobilize and get students across the UC [system] to mobilize as well.”

Boparai explained that A.S. Council could write up a resolution letter based on the scope of the demonstration, but without the support of the administration, further action couldn’t be taken.

“We need a louder voice, so I think that it’s time, especially with a new [Vice Chancellor of Equity, Diversity and Inclusion] coming in, to have more spaces for students to express their voices about issues that are going on and impact our university to be a part of the issue,” Boparai said. “As students, we can raise the issue and try to make a change, but unless we are getting our university on board, we’re kind of failing in that respect. It’s time for UCSD to do something, not just students at UCSD.”

Livingston also commented that she hopes the university will provide support for students when situations like these arise and that the university would hold its faculty and staff to a higher expectation.

The demonstration began at Price Center around noon and continued to Library Walk, at which point the members of the demonstration, and many individual students who had joined in, centered in front of Geisel Library. The approximately 100 demonstrators formed a “circle of solidarity,” as they called it, and held hands while four-and-a-half minutes of silence was held for the four-and-a-half minutes that Michael Brown’s body was on the ground. After that, an open forum was held for anyone to speak. People spoke of their anger toward the injustice in the legal system, their individual experiences of prejudice from police officers and how African-Americans are still fighting for civil rights: “The white man has never been civil or right,” said one of the individuals in the circle.

External Vice Chair of BSU Brilon Cooper explained to the Guardian that black people in particular have been subjected to criminalization and dehumanization, and, due to that, BSU wanted to make the demonstration similar to “Black Lives Matter,” as well as to make a community effort to be united on an important issue such as this one.

“This is not just a single incident kind of issue — this is a bigger issue than just these couple of incidents that are on the TV,” Cooper said. “Black lives matter because, clearly, what the media … is telling us is that black lives don’t matter, but because we’re being dehumanized and we’re being criminalized, we’re not supposed to be a part of that ‘all lives matter’ kind of thing.”

BSU Retention Coordinator Andre Thompson spoke in the circle and began calling to the police officers who were standing on the upper levels of Geisel Library watching the protest.

“I’m proud of everybody out here and the fact that the police are up there and watching us and are not up here in solidarity — they fear us,” Thompson said. “Why can’t you stand with us? I challenge you to stand out here with us.”

The protest ended around 2:30 p.m. with a “hollaback,” in which every member of the circle put their left hand on the right shoulder of the person standing next to them. Livingston, Cooper and another BSU member then yelled to the group “hollaback!” and the group responded with “I got your back!”

Livingston said that the Mike Brown and Eric Garner cases are just some examples of the many injustices the community faces at the hands of police, vigilantes and security forces across the nation.

“This system has no regard for black lives when there is evidence that we are being murdered, yet our killers are being set free. But on this day we declared and demand that others understand that ‘Black Lives Matter,’ as we chanted throughout Price Center East,” Livingston said. “Because if we don’t take a stand for change, then who will? And [if] we don’t take it now, then when? Now is the time for the UCSD community to wake up and stand on the side of justice.”

Livingston was unable to give further details of what the BSU plans to do next but told the Guardian that the organization will be holding demonstrations in the future.