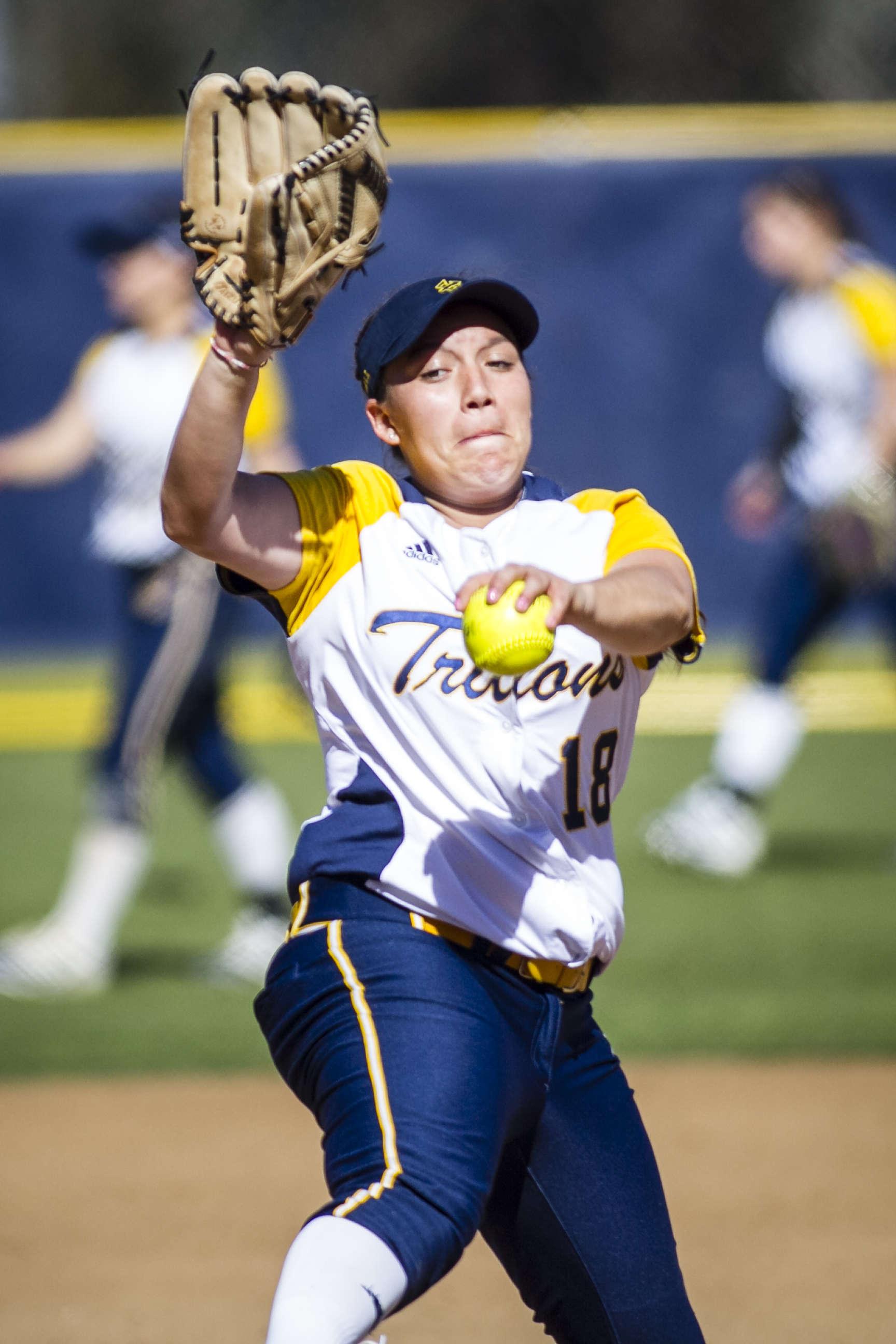 After a 34–18 season, the UCSD softball team ended its season last Saturday as the Tritons were eliminated in the NCAA West Regionals after a pair of losses to host No. 15 Dixie State and Central Washington University. The Tritons went 1–2 through the tournament, winning their opener against Humboldt State University before dropping the last two contests.

Facing the nation’s fourth-ranked team in their first game, the Tritons snapped an 11-game losing streak to Humboldt State in a 10–6 victory. UCSD finished with a grand total of 17 hits and racked up a 6–2 advantage going into the bottom of the seventh.

However, Humboldt State rallied to break sophomore left-hander Alexis Edwards and plate four runs in the final frame, sending the match into extra innings. UCSD responded quickly, adding four runs off of five hits. In the bottom of the eighth inning, Edwards shut down the Lumberjacks to secure the upset win.

“When we went into extra innings, I knew our team was going to hit,” Edwards said. “Once Mya [Romero] made that last out in the last inning, everyone was just so excited. Of course my heart was pumping so fast.”

Senior right-hander Jennifer Manuel started on the mound against the top-ranked DSU offense in UCSD’s first loss of the tournament. Manuel kept the Red Storm scoreless through the first four frames while Triton offense tallied three runs by the bottom of the third.

Edwards replaced Manuel in the fifth inning after DSU bats brought two runners home and Manuel faced a bases-loaded situation with none away. The Red Storm capitalized on its advantage and drove in two more runners to take their first lead of the game at the end of the fifth inning. The Tritons failed to overcome the deficit in either of the final two innings, while DSU added another run in the final frame en route to a 5–3 final score.

A few hours after their loss to DSU, the Tritons came up short against Central Washington 10–1. A grand slam in the third inning gave the Wildcats the lead while six more runs in the seventh inning left little hope of a UCSD comeback.

DSU and Central Washington went on to face each other in the championship game on Sunday; DSU prevailed and progressed to Super Regionals.

For five graduating seniors, third baseman Emily McQuaid, center fielder and first baseman Caitlin Brown, right-hander Jennifer Manuel, shortstop Mya Romero and outfielder Kirsten WIllmon, these were the final games of their collegiate careers. Each of the five played a major role in UCSD winning its first NCAA Softball National Championship in 2011, during which the Tritons maintained a .665 winning percentage over their career — the highest of any class. The seniors helped propel UCSD to four consecutive playoff appearances, leaving an indelible mark on the program.

“[Losing] the last game was upsetting especially for the five seniors,” Edwards said. “They’ve done so much for the program. It was devastating, but I know they’ll always be there for us. They’re like our family, so I know that we won’t lose touch with them.”

Brown was also recently selected as the Daktronics, Inc. All-West Honoree, along with Edwards and sophomore outfielder Callie Grant.

“It’s an honor to be selected,” Brown said. “The most important thing to me has always been to represent UCSD, and I’m glad I had the opportunity to do so.”

UCSD concludes the 2014 season after making major improvements throughout regular play and making its fourth straight appearance in the NCAA postseason.

“This was really a year of improvement,” Brown said. “We started rough, but worked really hard to improve throughout the year. Even though we finished short, we really fought hard to the end, and I’m very proud of that.”