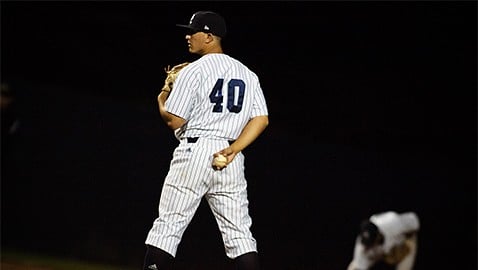 The No. 24 UCSD baseball team fell 8–4 to No. 27 California Baptist University in a non-conference game last Wednesday before sweeping Cal State Stanislaus in a four-game, in-conference series over the weekend. The Tritons improved to 25–11 overall and 21–7 in the California Collegiate Athletic Association. UCSD now boasts the longest CCAA win streak with 11 straight in-conference victories.

With the conference championship slated for early May, UCSD sits third in conference standings, two games ahead of fourth-place Cal Poly Pomona. Chico State is currently in second, only a game ahead of the Tritons, and Sonoma State currently leads the conference.

On Wednesday, UCSD slipped early against California Baptist, ultimately allowing the underdog Lancers to pull away with the upset. The Tritons allowed four runs in the first inning to CBU and were never able to overcome the early deficit.

Junior southpaw Chad Rieser had an especially rough outing on the mound, surrendering four runs, three of them earned, on three hits. Rieser retired the Lancers in order in the second before leaving the game.

Senior outfielder Justin Rahn led UCSD’s offensive efforts, going 3-for-4 on the day. However, the Tritons failed to produce consistently clean hits off the CBU staff.

Sophomore right-hander Justin Donatella threw his first wild ball of the year and allowed four runs on 11 hits in the game but still earned his sixth win of this season.

In the sixth inning, UCSD widened its lead and sealed the victory, sending a whopping six runners home, two of which were capitalized on Cal State Stanislaus’s errors.

“That’s baseball. That happens. When you put the ball in play and make the other team play catch, sometimes they make mistakes,” UCSD head coach Eric Newman told the UCSD Athletics Department. “We were fortunate that they did.”

The Warriors allowed UCSD to come back from a 4–1 deficit in the ninth inning in game one of Saturday’s doubleheader. With one out, redshirt freshman outfielder Brandon Shirley started the comeback with an infield single. Senior infielder Garrett Tuck came on as a pinch hitter and drew a walk to leave two on base. One batter later, now with two away, senior catcher Nick La Face took the plate to drive a two-run single up the middle. Rahn followed with another single to push home the tying runner. The Tritons held Cal State Stanislaus in the home half of the 10th inning to win 5–4 in extra innings.

UCSD handily won the seven-inning nightcap 10–1 with little contest. Sophomore infielder Troy Cruz went 3-for-4 with two doubles, a first for his collegiate career. Senior right-hander Blake Fassler lasted through five frames on only 54 pitches, with two strikeouts and no walks.

The final game of the series featured another Triton deficit, this time down 3–0, but once again, UCSD mustered a comeback for the 4–3 win. Cruz started on the mound for the seventh time this year and allowed three runs, hitting one, walking one and striking out four.

Despite the sweep, UCSD wasn’t in full form this weekend after losing to CBU and playing a more contentious series than anticipated against last-place Stanislaus.   “When you get down to the end [of the season] here, every game is like gold,” Newman said. “The way I put it is that we have to keep getting better and be the best team we can be come the end of the year.”

UCSD next travels to San Francisco today for another CCAA series against San Francisco State to close out an 11-game road stretch. First pitch is scheduled for 3 p.m. today, and the four game series is set to conclude on Saturday, April 19.