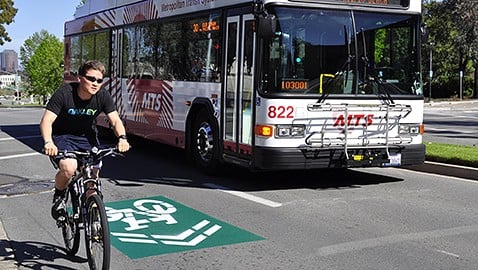 New bike improvements around UCSD, consisting of “sharrows” and “loop detectors,” are underway and will be implemented on Gilman Drive between Villa La Jolla Drive and Osler Lane/Scholars Drive South. Construction began on March 17 and is expected to finish by the end of Week 1 of Spring Quarter 2014.

Sharrows are green shared lane markers that are located on both sides of the street. They alert drivers to the presence of bikers and acknowledge that bikers, along with vehicles, have the right to utilize the lane. Loop detectors are sensors in the pavements on the right side of the street that allow bicyclists to trigger green lights and are currently being installed by the San Diego Association of Governments.

ASUCSD President Andy Buselt said that the project developed in response to the UCSD Bike and Pedestrian Master Plan, which developed in the spring of 2012. A.S. Council designed the project to create mobility infrastructure for cyclists and pedestrians around the UCSD campus. However, the plan had room for improvement and led to the creation of the Undergraduate Bike Report. A committee of undergraduate students, whose goal is to offer advice and critiques to the current Master Plan in order to improve the bicycle infrastructure on campus, submitted the report.

The undergraduate committee emphasized safety and sustainability in their plans when they drafted their report last summer. The committee also created the UCSD MOVES commission, which analyzes how UCSD students transport themselves to and from campus. Their goal is for students to work in institutionalized roles in order to advocate for the best options for active and mass methods of transportation. MOVES Executive Director Kyle Heiskala explained how MOVES is involved in all the current bicycle constructions on campus and what students can expect to see in the future.

“I have been developing presentations, working with the University and with committees to get three main projects implemented,” Heiskala said. “There is the University Centers Improvement: improving Hopkins Lane in between the Hopkins Parking Structure and Geisel Library. The second is down by Gilman Drive — extending bike lanes there. And the third is the construction of a bridge that will extend over Gilman Drive and Interstate 5 and will create a new east and west connection.”

These projects are ongoing and are said to be completed in the next couple of years. The Gilman Bridge is set to begin construction Fall Quarter 2015 and reach completion by 2016.

Director of Auxiliary Business Services Robert Holden explained how UCSD’s Transportation and Parking Services has been involved with the new bike lanes.

In addition, three bike repair stations will be placed in front of RIMAC, Geisel and the Student Services Center, possibly along with an extended bike-sharing program.

Heiskala hopes the bicycle projects will continue to grow in the next few years.

“The percentage of commuting right now is 2.25 percent,” Heiskala said. “My goal for the campus is to double our commuting to 5 percent by 2017.

Buselt believes bikers’ experiences will be enhanced due to the ongoing transportation projects.

“Once implemented, this new bike path will be the best, single improvement for bikes and cyclists this campus has seen,” Buselt said. “It will clear up a major congestion site in the center of campus.”