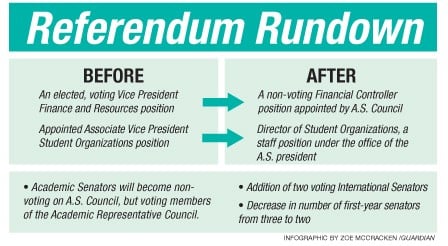 After weeks of exchanging proposed amendments to the A.S. Constitution between A.S. Council and the six college councils, A.S. Council passed the amendments as a referendum to be put to a student vote in the general election in Spring Quarter 2014.

A.S. Council originally passed these amendments in Fall Quarter 2013, after which they underwent the ratification process through the college councils. However, three of the seven amendments were not passed by the necessary four out of six college councils to be ratified.

According to the A.S. Constitution, there are two methods of ratifying directives passed by the A.S. Council. The first is to pass the document through four out of six college councils, and the second is to put the document to a student vote.

Opponents argue that this negates the role of college councils in the ratification process.

However, the biggest concern among members of A.S. Council was that students will make an uninformed vote, particularly because the constitution is a long and dense document.

King drafted a summary of the changes to be listed at the beginning of the document so that students do not have to read through its entirety.

“I just hope students actually make informed decisions and actually vote rather than abstain,” King said. “I’m sure we’ll see a lot of abstentions with this because it’s a long document, but I hope students will actually think critically about this.”