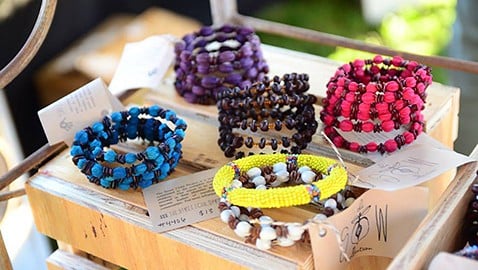 It all started with UCSD professor Prashant Bharadwaj’s ECON 116 class on economics in developing countries. UCSD alumna Kayla Trautwein, who graduated in 2013 with a major in Economics and a minor in Sociology, found her calling in that class: microfinance — a practice that allows low-scale entrepreneurs in developing countries to acquire loans to start their own businesses. Since graduating, Trautwein has put her passion for microfinance to work in an online fashion and lifestyle marketplace called Enrou. Described as a canvas for socially conscious brands, Enrou connects buyers with brands that support developing communities. Trautwein currently serves as the company’s CFO.

Founded in May 2013 by UCLA alumnae Ann Wang and Jessica Willison, both of whom attended high school with Trautwein, Enrou started as a simple Facebook page. At that point, Trautwein hadn’t talked to Wang or Willison since high school; but when she came across their Facebook page last July, she decided to join forces with them.
Instead of donating business proceeds to developing communities, Enrou aims to help these communities by providing markets for local artisans to trade their goods. Trautwein believes this practice is a more organic solution that will strengthen communities economically. She explained that trade gives power to local businesses and allows them to build a more stable economy, while aid only increases the community’s dependence on external donors.

So far, Enrou has partnered with seven brands that meet two basic criteria: they try to foster economic development, and the products they sell are aesthetically pleasing. One of the more well-known brands Enrou has teamed up with is Pura Vida Bracelets, which supports artisans in Costa Rica. Some of the clothing items Enrou carries were displayed by models from America’s Next Top Model Cycle 20 at the Techweek LA Fashion Show last November.

“We want people to feel like they are making an impact through each purchase,” Trautwein said.

Enrou aims to bridge the gap between artisans and consumers through their blog, blog.enrou.co, which they’ve used to share the stories of artisans through interviews. This way, consumers can learn exactly where the product is coming from and what it’s doing for developing communities.

Trautwein plans to stand by Enrou for the long-run and hopes to see the creation of a microloan arm of the company in the future, which would allow Enrou to make loans to support local artisans in developing communities.

Currently, Enrou is planning a socially conscious street-style campaign that they hope to launch in mid-February, in which people can post their outfits (from socially conscious brands, of course) to social media websites with the hashtag #enroutoempower. Through this campaign, the Enrou team hopes to reach out to the community. Trautwein also hopes to eventually reach out to UCSD in particular and spread awareness about Enrou’s work.

At the end of the day, Trautwein is still struck by a sense of wonder about the role she’s played at Enrou. But what strikes Trautwein more is that her journey with Enrou might’ve never happened.

“When you graduate, there’s this idea that you have to have a job right out of college, and if you move home right after, that’s weird,” Trautwein said. “I think just going with what’s happening and being yourself and not being embarrassed is important. If I had just taken the job offer I had been given at the end of school just to have a job, I wouldn’t be with Enrou now. It’s really humbling and very cool to step back and see how that played out.”